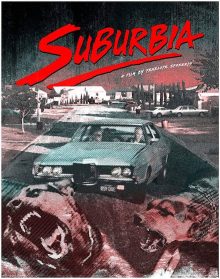 After putting herself through film school, taking waitressing jobs and such to pay her way, Penelope Spheeris was disgusted to find few opportunities for women to direct feature films in Hollywood. She managed to find a niche she could be quite successful in though, shooting concert films and music videos for bands. She’d always been into music anyway, so it was a good fit.

Through her love of punk rock and work shooting for bands, she got to know many of the punk groups of the time and decided to turn her camera on them for her debut feature film. This became The Decline of Western Civilization (which I reviewed here a few years ago – https://blueprintreview.co.uk/2015/09/the-decline-of-western-civilization-collection/), a documentary that offered an unfiltered but sympathetic and understanding portrayal of the punk scene.

Though now a respected film, Spheeris struggled to get Decline screened anywhere on its release. An industry friend advised her that she’d never get a documentary shown in theatres (something that has since changed over time) so the director decided to take her knowledge and experience of the punk lifestyle and turn it into a narrative feature film instead. Thus Suburbia was born. 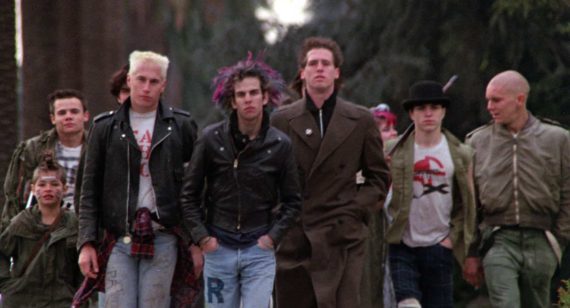 Producer Bert Dragin put up half of the money for Spheeris and she approached Roger Corman for the rest. Though the famous movie mogul didn’t understand the punk movement or, reportedly, what Spheeris was going for with her script, Corman saw potential in it as an exploitation film. So, he got on board and largely let the writer-director do as she wished, only asking she insert a little sex or violence every ten minutes, to keep audiences happy.

Spheeris obliged and Suburbia was unleashed on the world in 1983. Unfortunately, financial success once again eluded the director, with audiences not ready for her unvarnished view of a community quite alien to most audiences. However, over the years the film has become more respected and many members of the punk scene hold it in particularly high regard.

To give Suburbia a new lease of life in the modern era, 101 Films are releasing it on Blu-ray in a limited edition package as part of their excellent Black Label range. Being a big fan of Spheeris’ Decline series (she made another two documentaries under the same banner over the years) I shaved my head, stuck in my safety pin piercing and marched my way into Suburbia to cause some chaos (or maybe not – I’m probably the least punk person you’ll ever meet!) 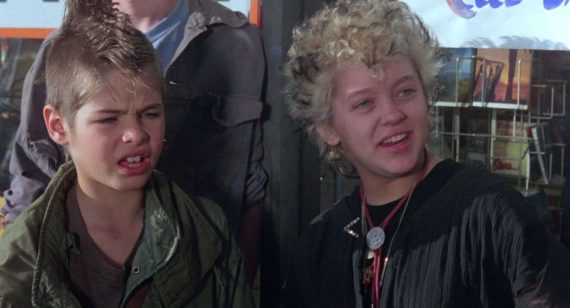 The film follows a group of young people from abusive or neglectful families who have either run away from home or have no home and form their own little commune in a disused house on the outskirts of the suburbs. The gang, who literally brand themselves ‘T.R.’ (standing for ‘The Rejected’) spend their days hanging out together, stealing from garages for food and spend their evenings at punk gigs, getting into the occasional fight along the way.

This existence, which seems idyllic to the kids, comes under threat when a couple of vigilantes claiming to be from “Citizens Against Crime” come snooping around and get on the wrong side of the gang. Further trouble is stirred up when some thugs frame a murder on T.R. and both the ‘good citizens’ of the area and the police want them out.

Suburbia is further proof of the exceptional skill the underrated Spheeris has of capturing the essence of what makes these rebellious but scarred punk teens tick. She never sugarcoats the characters in the film. They can be a**holes, have short tempers and a blatant disregard for most people outside their circle. However, the film does an excellent job of putting this anger and distrust into context. The general public don’t understand the youngsters and constantly give them grief and zero chances to explain themselves or live how they want. 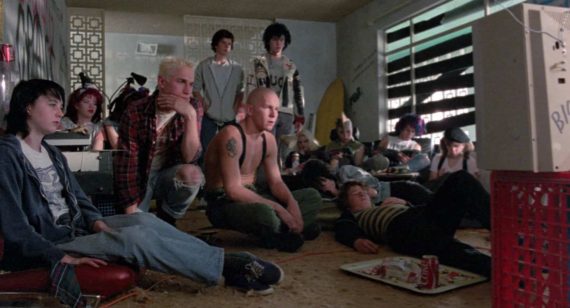 The gang are all from unloving backgrounds and broken homes too. What the punk scene and their living arrangement allow is for them to form a new family. It clearly works this way too, most notably when they add one of their members’ young brothers into the mix. One of the girls reads him bedtime stories and they all stick up for and nurture him in their own ways. What the gang lack in hygiene and formal education they make up for in camaraderie, friendship and support.

The rest of society doesn’t get this though and become the ‘bad guys’ of the piece. Interestingly and refreshingly, the sole adult who does understand the gang, to an extent, and offers them advice rather than abuse, is a police officer (played by Donald V. Allen). He happens to be black, which might suggest he can see where the kids are coming from due to being outcast and let down by American society in another way.

Away from the interesting themes of the film, it has a nice sense of rhythm. The life of the young people is largely laid back and the loose style and slight narrative reflect this. However, possibly due to Corman’s regular sex and violence inserts, as well as some attention-grabbing live concert sequences, there are enough bursts of energy in the film to drive it forward. The more extreme scenes can be pretty shocking too, beginning with a stray dog mauling a toddler to death and ending with a real punch to the gut that I won’t spoil here. 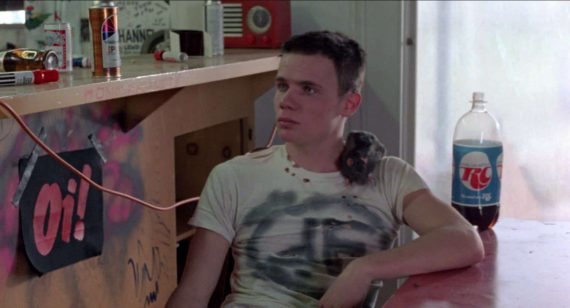 Spheeris chose not to cast actors in the roles of the gang, instead using real punk kids. She believed it was easier to teach these youngsters to act than it was to teach actors to be punks. I think this both helps and hinders the film though. The characters have a real authenticity to them which sets the film apart from many other on-screen portrayals of punks. However, the kids aren’t always very good at delivering their lines, coming across as a bit lifeless at times. This deadpan delivery does work to an extent in reflecting the ‘don’t give a f**k’ attitude of the kids, but you do wonder whether a trained actor could have injected a little more life into the lines.

Some of the youngsters fare better than others though. Flea made his debut performance here before his Red Hot Chili Peppers days, let alone film roles. You can see from the offset that there was something special about him and he proves to be one of the most memorable characters.

Overall, Suburbia provides a sympathetic but unflinching look at society’s lost youth and describes how gangs, music and cultural movements are important to them, whilst pointing a finger at the supposedly ‘good, honest citizens’ who cast them aside. It may be a little rough around the edges in places but Spheeris delivers her message with force and presents a richly believable atmosphere, as well as relatable characters. It’s up there with the best youth and punk movies, that’s for sure. 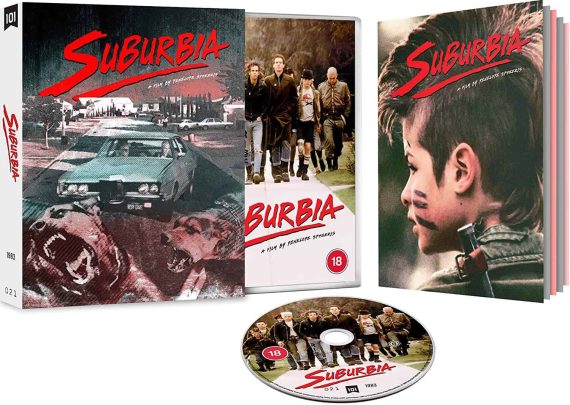 Suburbia is out on 6th September on Limited Edition Blu-Ray in the UK, released by 101 Films as part of their Black Label range. You can order it here. The picture quality is very good. It nicely retains the natural grain of the original film stock. The punk rock soundtrack comes through nicely too.

There are plenty of special features included in the Limited Edition package: 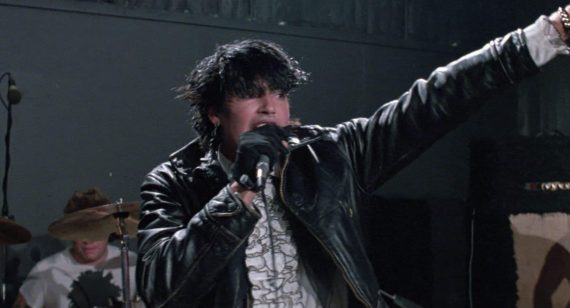 Spheeris’ new interview is fantastic. I love listening to her thoughts and stories. She’s refreshingly honest and clear in her mind about what she did and why. Like the punks in her film, she comes across as tough but lovable.

Like her interview, her commentary is also frank and a lot of fun, though it treads on some of the same ground and she does spend a bit of time just watching the film and spotting people saying “oh my God it’s …” Overall it’s a great track though.

In the group commentary, Spheeris tells a lot of the same stories again, but it’s still a lot of fun and the other contributors add a slightly new perspective.

The booklet is very good too, containing two essays, one on punks in Suburbia and another on the history of juvenile delinquents and young gangs on film. They both make for interesting reading and make the extra price of the limited edition release worth it.

So, though there’s a bit of repetition in the special features, it’s all enjoyable and informative stuff. Alongside such an exceptional film, it makes for a strongly recommended purchase.