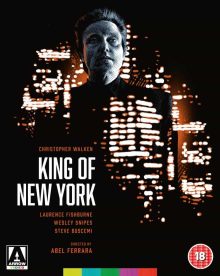 King of New York saw the controversial director Abel Ferrara, who’d cut his teeth making a couple of cult-favourite grindhouse movies (Driller Killer and Ms. 45), turn his hand to a more mainstream feature with a fairly decent budget. The film didn’t make a huge amount of money on its original release, but over time it became well-loved among movie-fans and marked the start of Ferrara’s most successful decade. During the rest of the 90s, he made acclaimed films such as Bad Lieutenant, The Addiction and The Funeral, as well as probably his most mainstream work to date, Body Snatchers. Since then he’s fallen off the map a little, though Pasolini was well-received and he’s made a few films of note among an eclectic collection, including several documentaries.

King of New York remains probably the key turning point in his career though, and Arrow Video have chosen to add it to their gradually expanding roster of 4K UHD releases. I still haven’t upgraded my equipment to 4K (I’m too set on watching films through a projector and 4k ready models are way too expensive) so I got my hands on the newly remastered Blu-ray version, as I hadn’t seen the film in decades.

King of New York sees Christopher Walken play Frank White, a drug lord who’s just got out of prison after a fairly long stint. He wastes no time in getting back in the swing of things, executing several rival mob bosses who don’t want to join forces with him. You see, White plans to bring the disparate factions together and control the whole city of New York without interference. He also wants to do good with this power, starting by building a new hospital which the mayor is reluctant to fund. 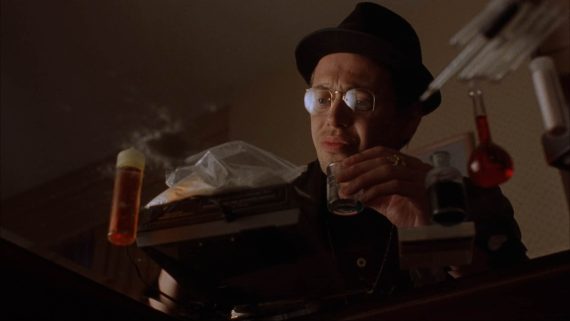 However, these grand plans are scuppered when he and his goons rub up the police force the wrong way. After White’s lawyers manage to evade criminal charges placed on members of his gang, a group of cops led by Dennis Gilley (David Caruso) vow to bring White down, no matter what it takes, despite warnings from their superior, the jaded detective Roy Bishop (Victor Argo). This new war, on top of White falling back on his violent ways, lead to the crumbling of his empire.

It’s been a long time since I’ve seen King of New York, but my vague memory was that I enjoyed the film but wasn’t wowed by it and little of the film stuck in my memory. On this recent rewatch I saw the film in a better light, but equally can see why I wasn’t completely bowled over, as some are by the film.

What stood out for me most as a big plus-point on this rewatch was the style. I likely watched the film originally on VHS, taped off TV, and this new 4k remastered print, in the original aspect ratio, of course, helped me appreciate how strikingly well shot the film is. DOP Bojan Bazelli makes brilliant use of the New York locations, utilising the neon, architecture and glass to create a stunningly moody atmosphere. 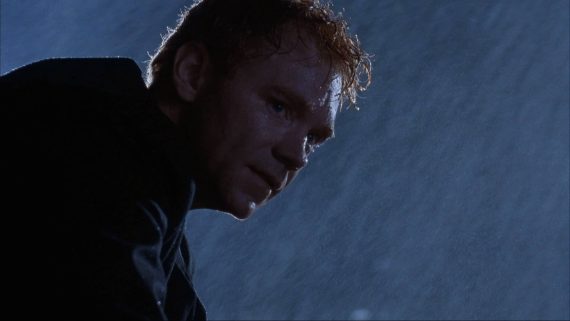 The style is quite unusual too, blending subtle, slow-paced passages that are driven by mood and tone with in-your-face explosions of violence. It reminded me a lot of Drive in this sense.

Also impressive in the film are its performances. Walken is intensely captivating, snapping between playful and terrifying in unexpected moments. He’s not the only one that stands out though. Making up the rest of the cast are a number of actors that are well known now, but at the time were relatively minor players. The list includes David Caruso, Laurence Fishburne, Wesley Snipes, Steve Buscemi and Giancarlo Esposito. Fishburne had done a few big films previously but largely in small roles and although he’s not the star here, his performance is one of the biggest and most memorable. Reportedly he was down for a different role (the one Snipes got) but asked to audition for Jimmy Jump, White’s right-hand man, and blew it out of the water. He’s a ball of manic energy in the film and eats up most of the scenes he’s in. Victor Argo is excellent too, in a much more subdued role, as the ageing cop who wants to bring White down in a more legal method than his colleagues. 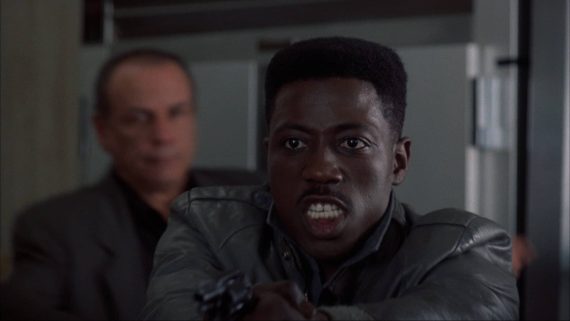 However, the film as a whole feels a little slight, leaning towards a case of ‘all style, no substance’. The story follows a pretty generic crime saga formula and the central character arcs are weak. The idea of having White plan to build a hospital is an interesting spin on the formula, but it’s not very well integrated within the story or his character so feels at odds with everything else. I did appreciate how White doesn’t discriminate though and is proud to develop a multicultural gang, much to the disgust of some of his enemies.

Overall then, King of New York’s lingering, moody tone and shallow substance might not be to everyone’s tastes. However, if you can accept its approach and soak up the atmosphere, it’s a handsomely mounted, stylish treat. The performances go a long way to selling the sparse narrative too, alongside bursts of slick but brutal violence. 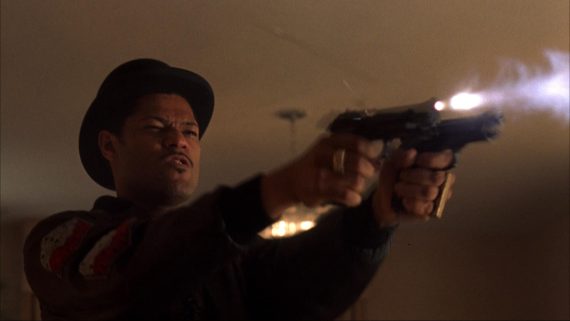 King of New York is out on 16th November on UHD, Blu-ray and DVD, released by Arrow Video. I watched the Blu-ray version and it looks simply stunning, with rich tones, incredible detail and gorgeous, natural colours. The sound is immaculate too.

There are plenty of special features included in the set:

* The Blu-ray Special Edition is the same as the 4K UHD, but with a HD presentation based on the same 4K restoration. 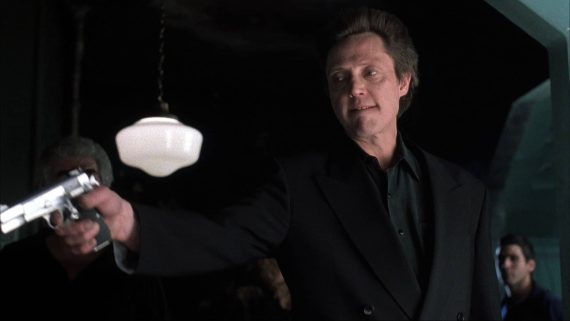 Ferrara’s commentary is quite rambling but entertaining. He’s very honest, laughing at the film and calling several sections ‘phoney’. He calls what he did ‘fascistic filmmaking’ – claiming he doesn’t make films like that anymore. His comments are not particularly fascinating from a filmmaking point of view, but it’s fun to listen to for the most part. Plus he sings and plays guitar on an impromptu ‘King of New York’ song at the end!

The other commentary is more standard, with members of the crew discussing the production. It’s still enjoyable though as they bounce off each other quite nicely and there are some fun anecdotes to tell.

I liked the ‘A Short Film About the Long Career of Abel Ferrara’ documentary quite a lot, which is made up of interviews with the director’s regular collaborators. It shows how he used to like working with the same people in a communal kind of fashion. It’s a lot of fun to listen to them give a warts-and-all, anecdote-heavy account of Ferrara.

The feature-length ‘Abel Ferrara: Not Guilty’ provides a wonderfully loose and candid portrayal of the director at work, life and in conversation. He’s his usual intense, scattershot self. It’s a bit long and rambling perhaps and Abel’s constant chattering can get tiring, but it’s still strangely engaging.

I didn’t get a copy of the booklet to look at, unfortunately, but the transfer and features alone are enough to easily recommend the release to fans of the film.