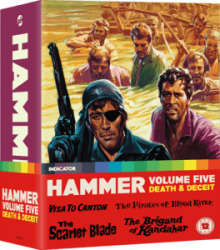 While investigating a missing plane in China, an American travel agent becomes embroiled in a sinister plot to smuggle refugees out of the country. 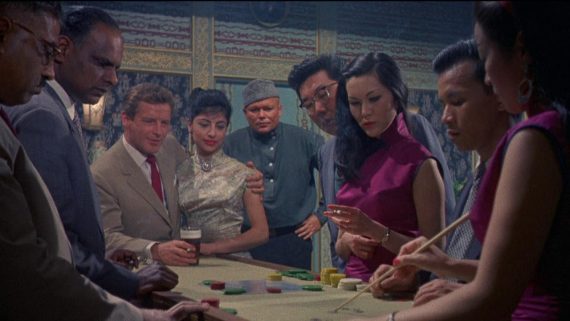 Oh my, Visa To Canton. Not exactly a great way to open this box set. This pre-Bond spy “thriller” follows Richard Basehart as Don Benton, every bit the “white saviour” archetype as he bumbles his way into a people smuggling ring in Canton. An honorary “son” of a Chinese family who took him in during the war, Benton is a smug and sleazy character who may or may not have a past as a spy.

There’s very little to say about the plot here. With an obviously low budget, the action mixes stock shots of Canton and Hong Kong with narrative scenes shot at Hammer’s home in Bray Studios. Long drawn out scenes with little action drag the plot out over its short 75min runtime, making the film seem like it’s a lot longer than it actually is.

Not only is Visa To Canton offensively slow, it’s also just plain offensive with a streak of casually racism that should probably have been expected of the era. As well as surrounding Benton with simpering Chinese women, there’s also plenty of white actors in “yellow face”, affecting an approximation of a Chinese accent. This is despite a fairly large cast of actual Chinese actors such as Burt Kwouk who are reduced here to supporting or background roles, presumably rolling their eyes at the action going on around them. This Poundland Bond would have been best left in the archives.

Exiled from his village by his religious zealot father for adultery, Jonathon finds comradeship in a group of ruthless pirates captained by the enigmatic LaRoche. Trusting them too much he inadvertently leads them back to his village in search of treasure where they put the locals under siege.

Pirates of Blood River is closer to the kind of campy costume horror Hammer are famous for, but with a piratical twist. This fairly macabre tale is certainly well set up and gets all its characters in line before diving into the meat of the story.

The tale here explores a couple of different moral angles, from the pitfalls of extreme religious zealotry to a “be careful who you trust” story of the wolf in sheep’s clothing pirates, and leads to a zippy and entertaining adventure thriller with a spot of siege movie thrown in for good measure.

Production values are great with mostly outdoor photography, but a low budget means we have amusingly land bound pirates with only a little stock footage and a brief moment on set to allow us a bit of pirate ship action. The cast is full of familiar Hammer faces with the late, great Christopher Lee giving a deliciously enigmatic performance as Captain LaRoche. Unfortunately Oliver Reed, in his first appearance in this box set, is sadly underused as a growling pirate grunt.

With a great picture clean up, Pirates of Blood River is easily the best film in the set.

It is the English Civil War – Charles I is on the run from Oliver Cromwell’s troops when the Parliamentary Captain Tom Sylvester decides to switch sides to the Royalist camp; but are his motivations noble, or is he more interested in hunting for the mysterious Scarlet Blade?

The Scarlet Blade is a bit of a mess. Setting itself up as a Civil War era Robin Hood or Zorro yarn, its story quickly derails by focusing the narrative almost entirely on the Parliamentarian baddies and the betrayal of Reed’s Capt. Sylvester, leaving you with little time to get to know the “heroes” and actually root for them.

When the plot does decide to throw a little action in among the costume drama, however, it is definitely well played with some excellently choreographed battles and brawls featuring some particularly wince inducing stunts performed by the game cast. Performances certainly aren’t dull, with Lionel Jeffries exuding a calmly menacing air as Roundhead Col. Judd, while Oliver Reed is on top form as the callous and Caddish Sylvester, arguably the main character of the film.

While it has its moments, The Scarlet Blade is just too plodding and muddled with an abrupt and dour ending – it wants to be a swashbuckling adventure but falls super flat despite some entertaining action. Only worth watching for a thoroughly entertaining Reed.

The Brigand of Kandahar

Case, a half-Afghan Lieutenant based at Kandahar in the 1950’s flees his post following a court-martial by his superior officers. Falling in with a group of brigands led by the nefarious Eli Khan, Case begins to enact revenge on his racist former superiors – but are his new comrades just a different form of evil?

Oliver Reed went on record as saying he felt The Brigand of Kandahar was the worst film he made with Hammer and it’s not hard to see why. Not only is Reed cast here as a pantomimic, scenery chewing villain in Khan, all moustache twirls and Doctor Evil laughter, there’s also the same brand of casual racism on display that we previously saw in Visa to Canton. All of the lead Afhgan characters are played by white actors in makeup and there’s a strong theme of racism running through the plot, starting with the decision by the Kandahar officers to court-martial Case seemingly based on their prejudice towards his mixed race genes.

Where Brigand of Kandahar succeeds, however, it presenting a story that (admittedly somewhat hamfistedly) tries to tackle the moral issues of racism in the British Raj from both sides. Khan’s gang are bloodthirsty and untrustworthy, but it’s both the betrayal of Case by his superiors and their refusal to listen to his warnings the Khan himself needed to be dealt with lest they face further assaults by him that acts as the catalyst to the overall story. It’s a shame that Case isn’t a more engaging character, though; played rather one-note by Ronald Lewis (who was fantastic in the excellent Tase of Fear which appeared on the Hammer Volume 4 collection) he’s a hard character to sympathise with, which actually leads to Glynn Huston’s reporter, Mariott, becoming the conduit for the audience to engage with the story and ultimately deliver the moral sting.

It’s certainly muddled and a bit morally dubious in 2020, but its battle sequences (awkwardly borrowed from the 1957 film Zarak and crammed in among the Bray studios shot on-set footage) and intriguing plot lead to a fairly watchable action adventure film.

THE PIRATES OF BLOOD RIVER

THE BRIGAND OF KANDAHAR

As is now expected, Indicator have gone above and beyond with the presentation of this box set, lavishing each film with a generous selection of extras including new interviews, commentaries and essays in the accompanying booklets.

Where Volume 5 is sadly let down, however, is in the quality of the films. Whether it be budgetary constraints, dull scripts or “of the time” subject matter, this box set is absolutely for the collector only – the casual viewer will find little of interest.