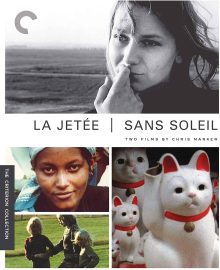 Chris Marker, though never a household name, was better known than you might expect for a director whose work was distinctly uncommercial. Working in unusual, sometimes experimental styles to create art films as well as dedicating a good portion of his career to making film essays, he hardly modelled himself on Steven Spielberg. Marker was a French director who came from what some have called the ‘Left Bank’ of the New Wave, i.e. not from the popular film-loving Cahiers du cinéma group (Claude Chabrol, François Truffaut, and Jean-Luc Godard) but rather those from the same era who developed film as ‘high art’.

The main reason he’s known among a fair number of film enthusiasts is surprisingly down to a short film he made in 1962, La Jetée. Not only is this a popular film to screen to college and university film students but it was famously remade by Terry Gilliam as 12 Monkeys. This raised Marker’s profile a great deal in the 90s, though I’d argue it hardly sent people buying his films in droves, largely because they weren’t readily available, let alone accessible to a mainstream audience. Marker deserves more than just “the guy who made that film 12 Monkeys was based on” status though and Criterion are looking to remedy that by releasing La Jetée in a Blu-ray set alongside one of his better-known feature films, Sans Soleil. I’d seen the former a while back when I was in university and I’d been drawn to it, so I figured I’d give the set a look.

La Jetée is a science fiction short set in a post-apocalyptic future where the ruling survivors experiment in sending prisoners back and forth in time to save the present. These experiments have been failing, until our protagonist and narrator (played by Davos Hanich visually and the voice of Jean Négroni or James Kirk, depending on the audio option you choose) is chosen for the task. This unnamed man is obsessed with a distinct memory from his childhood where he sees a beautiful woman and watches a man die. This memory-obsessed mind means he is well suited to the mental strains of time travel.

When he manages to enter into the past fully after merely observing fragments, he forges a relationship with the woman from his memory and when his mission is a success he attempts to stay there with her but it’s clear his experimenters intend to kill him now he is no longer of use to them. 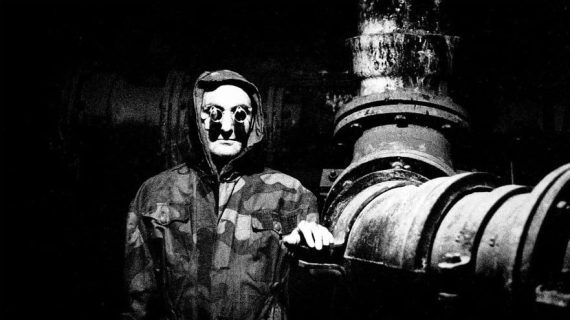 I’m not generally a fan of short films. I often find them rather slight, merely intended as a showreel to kickstart a feature film career or more concerned with experimentation over engaging an audience. However, La Jetée manages to be engrossing, thought-provoking, experimental and dramatically satisfying at the same time.

What is instantly most striking about the film is its style. Instead of shooting actors in motion using a film camera, the film’s visuals consist of a series of still images. This photo montage is edited in such a way and presented under music, narration and occasional sound effects to still feel like a film. The choice of shots and angles aid this too, along with a couple of sequences where the images retain a similar angle and have the shots change more rapidly to give the feel of movement.

It’s an unusual but highly effective technique. Perhaps the film would have worked just as well shot in a standard way, but it wouldn’t be nearly as memorable. Saying that, La Jetée’s time travel aspects are quite ahead of their time. Yes, time travel had been done before in literature and on film, but this has a more thoughtful and philosophical approach than the time travel adventures seen in Jules Verne adaptations prior to this.

There’s enough substance here to develop the idea into a feature film (as 12 Monkeys proved, though it’s only loosely based on La Jetée) yet Marker made the right choice to keep it lean and focussed. Its artful approach might have proved too much over 90 minutes or beyond. As it stands though, the film is highly effective, providing an atmospheric, abstract and artful spin on the time travel movie.

Sans Soleil is a most unusual film that many class as a documentary (Sight and Sound voted it the third-best documentary of all time) but it could be argued it’s something altogether different. The visuals are very much in the vein of a documentary, showing travelogue-like footage largely from Japan and quite a lot from Guinea-Bissau, as well as short segments shot in Cape Verde, Iceland, Paris, and San Francisco. However, tying everything together is narration we’re told is from letters written by a cameraman called Sandor Krasna. Only Krasna doesn’t exist, the narration is all written by Marker for the film. It’s an odd choice, as in my mind it would work just the same if it was Marker giving us his own thoughts on his travels.

The narration, on top of its strangely ‘fictional’ slant, is the make or break point of the film for audiences. It has a near stream-of-consciousness flow, drifting off on tangents (taking the footage to the other countries listed earlier) and covering a range of philosophical ruminations largely surrounding aspects of time, society and memory. This style can be off-putting to many or a treat to intellectual viewers who love a more poetic film that also troubles your brain cells. 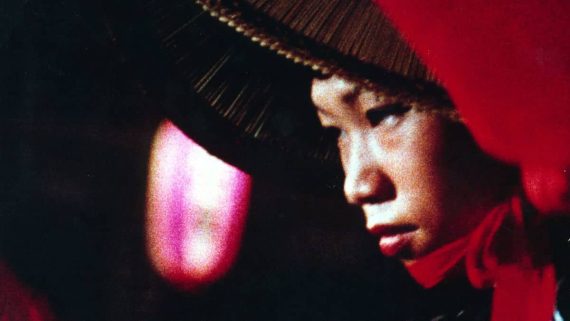 Personally, I struggled to engage for the first half an hour or so (not helped by writing review notes whilst watching) but, after a while, the style grew on me and I was hooked. I’ve always been a fascinated observer of life (a voyeur might be a more blunt term) so I got a lot from merely watching the footage, though Marker’s narrated pondering also proved thought-provoking at times.

On top of his footage being effective in showing unique societies 30-odd years ago, Marker is also great at capturing people at wonderful, seemingly innocuous little moments. Some don’t realise they’re being filmed so you get unaffected glimpses into their true characters and at other times people are very aware of the camera and it’s equally as fascinating to see their reactions. Marker even spends some time on one instance of this and discusses it in the narration, referring back to it later. 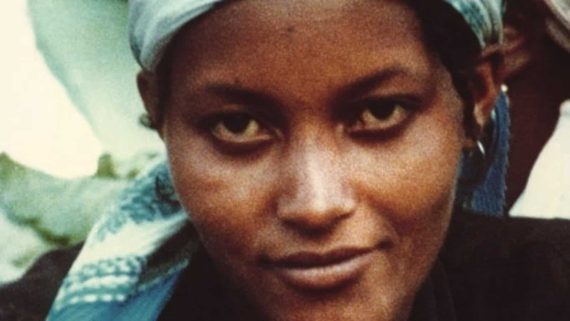 The narration has a melancholic, occasionally quite cynical tone but there’s hope there too and even a little humour, such as the ‘whack-a-mole’ that has been repurposed to have the moles look like business managers. Marker’s playful and idiosyncratic approach, in general, has a charm once you let yourself engage with it. I found a comment he made about how the film footage has become his memory of his travels to be rather prescient too. In the modern world, everyone takes photos or videos of everything, then shares them online rather than verbally telling people about their experiences.

Sans Soeil has a few similarities to La Jetée too. Both are particularly interested in memory, ideas of looping time and both have a cyclical structure, ending back where they started but from a different point of view.

I was also impressed by the sound design of Sans Soeil. Its electronic music and manipulation of sounds are perhaps a tad dated, but I thought it was still very effective. Often in the film, the sounds you’d expect to hear from the footage on-screen are muted or warped in such a way to suggest you’re watching a faded memory rather than film footage, which works nicely with the narration and theme. 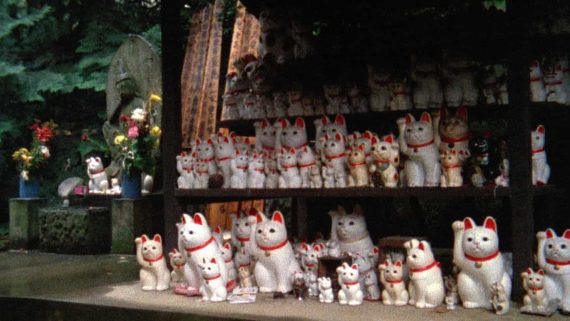 Overall then, Sans Soleil is a film that certainly won’t appeal to everyone and in fact I was ready to dismiss it as pretentious tedium at an early point, but Marker’s imagery kept me entranced and I gradually found much to latch on to in the narration. Some went over my head but, by the end, I was bewitched and enriched by the experience. I’d go as far to say it has the ability to affect the way you look at the world if you let it get to you.

A Blu-ray set including La Jetée & Sans Soleil is out on 16th December in the UK, released by The Criterion Collection. Both films look and sound great, with clean and detailed images and clear soundtracks. You get both French and English narration options. I opted for English, which I wouldn’t usually do, but the blurb on the disc ensures you that Marker preferred viewers to listen to the language most familiar to them. Plus the dialogue isn’t synced with any on-screen characters/performers so I figured it didn’t make much of a difference. I’m glad Criterion provides both options though and explains the director’s intentions.

– New, restored high-definition digital transfers, approved by director Chris Marker, with uncompressed monaural soundtracks on the Blu-ray
– Two interviews with filmmaker Jean-Pierre Gorin
– Chris on Chris, a video piece on Marker by filmmaker and critic Chris Darke
– Two excerpts from the French television series Court-circuit (le magazine): a look at David Bowie’s music video for the song “Jump They Say,” inspired by La Jetée, and an analysis of Hitchcock’s Vertigo and its influence on Marker
– Junkopia, a six-minute film by Marker, Frank Simone, and John Chapman about the Emeryville Mudflats
– New English subtitle translations
– PLUS: A booklet featuring a new essay by Marker scholar Catherine Lupton, an interview with Marker, notes on the films and filmmaking by Marker, and more

In terms of features, it’s not the strongest set Criterion has released, but there are some solid featurettes here. I found Jean-Pierre Gorin’s interviews a little pretentious, giving Marker an intellectual arse-kissing (if you’ll excuse the phrase) but the other pieces, if short, are of reasonable value. There’s an interesting theory in the ‘On Vertigo’ feature about La Jetee being about Marker’s obsession with Vertigo and how he imagines being able to put himself in the film. His character puts himself into the images of the woman in his mind and joins her in a seeming reality. The same programme’s theory on David Bowie as a time traveller is a little more far fetched though! Hopefully they’re just referring to the meaning of the La Jetée symbolism in the video.

The ‘Chris on Chris’ piece is fairly interesting as a short look at Marker’s work and its significance, though it’s designed as an advert for an installation Marker was putting on at the time. ‘Junkopia’ is a fairly straightforward but effective document of some short-lived art.