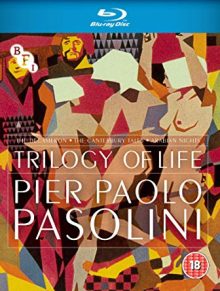 Pier Paolo Pasolini started his career as a poet and philosopher before he moved into screenwriting and became a protégé of Fellini, eventually with the two falling out when Pasolini chose to make his 1961 debut, Accatone, the story of a pimp in the Italian slums. After a decade of making increasingly darker and nihilistic films, Pasolini decided to turn his hand to lighter fare. Returning to his love of classic literature, he created the Trilogy of Life – adapting three famous collections of short stories.

Made in 1971, the first of the trilogy is The Decameron which adapts nine stories from Boccaccio’s 14th century book which was comprised of a hundred tales. Framed by a tale of con-man, Ciappelletto (Franco Citti), the viewer is quickly introduced to a cast of characters and their, in the main, erotic adventures. There’s Andreuccio of Perugia (Ninetto Davoli) ripped off in an elaborate con by a woman posing as his half-sister, who takes up with a group of grave robbers, only to be swindled again. A man poses as a deaf mute in a cloister of sexually repressed nuns, only to become their sexual relief; a woman tricks her husband into cleaning out a giant clay vase while he’s oblivious to her cavorting with her lover; three brothers murder their sister’s lover; a young girl fools her parents into letting her sleep on the rooftop so her boyfriend can sleep with her; and a priest convinces a simple farmer that he is performing a miracle by sleeping with the farmer’s young wife. During the second half of the film Pasolini appears as painter, Allevio di Giotto who is producing a mural in a church. The film concludes with live action representations of Giotto paintings.

The second film, based on Geoffrey Chaucer’s The Canterbury Tales stars Pasolini as the author, the central conceit being a group of pilgrims making a journey to Canterbury, each telling a tale to pass the time. This time there are eight separate tales, beginning with the Merchant’s tale, following a young woman (Josephine Chaplin) who marries an old man, who later loses his sight and discovers her indiscretion. Other tales include the devil coming to witness human misery; three young boys discovering a treasure and turning on each other; a wife and her lover convince her husband a second great flood is coming and he must hide away; the Wife of Bath killing off her husbands with her sexual desires; and a truly stunning final sequence where an angel takes a friar to hell to warn him of the folly of his carnal desires. 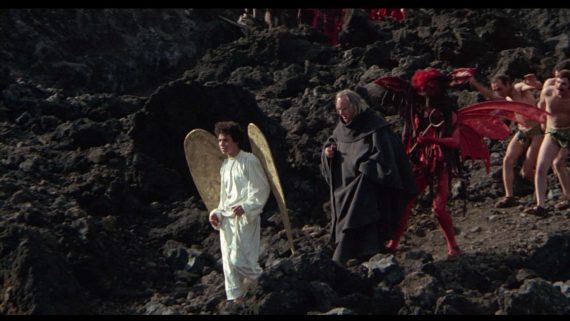 The final film, Arabian Nights focuses on the erotic tales from the collection. The film is framed by the story of a slave girl, Zumurrud (Ines Pellegrini) who is allowed to choose Nur Ed Din (Franco Merli) as her master. However, they are soon separated, and Nur Ed embarks on an adventure to find his lost love, who escapes her abductors, and, posing as a man, becomes king of a nearby city. Unfortunately, the stories within Arabian Nights are less interesting than the previous two films and Pasolini’s relaxed approach to narrative structure turns the film into a cohesive mess. It also lacks the visually stunning and bombastic climax he granted both The Decameron and The Canterbury Tales.

Pasolini’s Trilogy of Life is a refreshingly light-hearted collection of films from a controversial director better know for portraying darkness on screen. His aim would appear to be the celebration of sexual freedom whilst taking swipes at Christianity and religious dogma. His use of mostly non-actors is a brave decision that sadly doesn’t really pay off, something that becomes apparent in The Canterbury Tales when they are pitched against talented British actors like Tom Baker and Hugh Griffith. Forty years on, the sexual content is pretty tame and not as shocking as it once was, but the amount of nudity may be uncomfortable for some viewers.

This BFI release features a beautiful HD remaster of the films which only slightly show signs of the age of the original print. The audio is also of high-quality showcasing Ennio Morricone’s scores and include both Italian and English audio tracks. 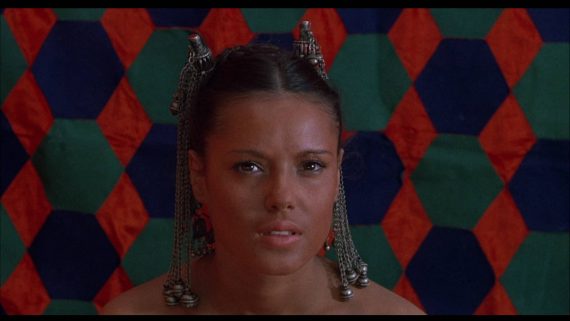 Special features on this release include a 2009 documentary titled Pasolini and the Italian Genre Film, an interview with Robin Askwith (who has a small role in The Canterbury Tales), deleted scenes from Arabian Nights and Pasolini’s visual notes for an unrealised film project called African Oresteia.

Trilogy of Life is not for everyone as Pasolini has a very unorthodox approach to filmmaking. For every story that engages you, its followed by one that makes no sense and leaves you wondering if you’ve fallen asleep and missed a vital plot point. That being said, there is no denying the quality of Pasolini’s visual style – great locations, sumptuous costume design and inventive cinematography abound. This is very much a Marmite collection, but I would recommend the first two films to anyone wanting to watch something different to the norm.

Trilogy of Life is released on Blu-ray by BFI.