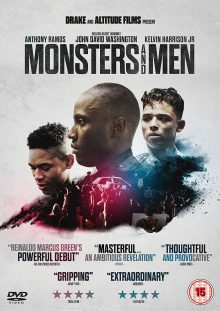 Taking place in the Bed-Stuy neighbourhood of New York City (also the setting of Spike Lee’s Do the Right Thing), the film is split into three acts. The first follows Manny Ortega, an ex-dealer with a young family and a new job who finds himself an unexpected witness to the murder and records it on his phone. Harassed by the police and under pressure from his family, both who want him to keep quiet, Manny must decide whether to stay silent or make the video public and take a stand against injustice.

The second part focuses on Dennis, a black policeman who is stationed at the same precinct as the officers who took part in the killing. Similarly conflicted and caught between upholding the code of brotherhood or talking to Internal Affairs and speaking out against corruption, he finds himself at a crossroads which can seriously affect him and his family.

In the final act, a local high-school student with the talent and aspirations to be a professional baseball player, becomes involved with a growing protest movement around the killing and must decide whether to focus on his future as a professional sportsman or make a change in his community.

Green provides interesting parallels with his three leads, particularly in the way that each of them struggles to placate friends and relatives who encourage them to stay silent about the injustices around them, even if this would make them complicit. The director has taken an interesting approach to the subject matter, using the shooting as a mere starting point to explore the way personal actions can resonate across the divides in a community. In effect he has created three mini films following three distinctly different characters and their stories. However, character studies take time to develop, and Monsters and Men short running time does not allow room for the stories to grow. Although each of the three leads have roughly the same amount of screen time, it is Manny’s which suffers the most. There isn’t enough onscreen interaction with his family to really get a sense of his internal struggle pitting the family man against the former street hood who wants to stick it to the man. As we reach the end of his narrative we are left with a deeply unsatisfying lack of resolution.

More satisfying is the story of the policeman, Dennis – in fact he is the first character we are introduced to in an early prologue where he’s seen off-duty and being pulled over by a white police officer without cause; later, we learn that it’s the sixth time it has happened to him this year. He’s extremely frustrated by the institutional racism around him, but nevertheless maintains his passion for the job. As his story comes to a close, he passes by a young man being searched by officers. The young man is Zee, a high school baseball player who is close to being drafted into the major league if he can stay out of trouble. Of the three protagonists, Zee’s dilemma holds the most power – I thought I could see the predictable path the narrative was headed down but was pleasantly surprised as it went in more unexpected directions. As his coach and father encourage him to work hard and keep his eye on the prize, he’s motivated by the impact of his own encounter with the police who failed to find the drugs he was holding (which effectively scares him straight) and Manny’s video to become involved in civil rights activism. And although there is yet again a lack of resolution to his story, it is the most engaging.

Exploring such a controversial topic is never easy and director Reinaldo Marcus Green could easily have made a histrionic film offending many along the way, so it was a wise decision to make the movie character rather than plot-driven – allowing the audience to be mere observers of events as they play out without the need to batter us with obvious and one-sided political statements.

Monsters and Men is a strikingly mature and nuanced debut, but it does lack some power by taking the anthology approach. It tackles the issues thoughtfully, but some will find the lack of answers to the many questions it poses frustrating. I personally liked the quiet open-ended finale and was particularly pleased that the director didn’t feel the need to have the characters cross over in a forced way.

In the current political climate, Monsters and Men makes an excellent companion piece to Spike Lee’s BlackKkKlansman, although they are tonally at different ends of the spectrum. Green’s film doesn’t need to be explosive, rather gently niggling at you long after viewing.

Monsters and Men is released on DVD by Altitude Home Entertainment.