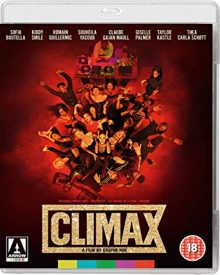 No stranger to controversy, Gaspar Noe’s latest film, Climax, debuted at Cannes last year with many decrying that it was his most depraved yet, whilst less hysterical critics were hailing it as a masterpiece. As somewhat of a fan of his work, I couldn’t wait to see what he had brought to the table this time.

As with his most well-known film, Irrevérsible, the opening of Climax is deliberately ordered to disorient the audience from the outset. The final credits scroll by first, then we are presented with an old television playing a series of videos featuring interviews with many young dancers, trying out for a prestigious US tour, talking about their love of dance and their backgrounds. Stacked around the sides and on top of the TV are VHS tapes of various films along with many books that show the influences of what will happen later in the film. This then switches to a ten minute dance sequence that is filmed in one long take with the camera swooping up and around the dancers as if it is part of the dance itself. As the dance ends, the party begins and so begins the narrative of the film.

Narrative is a rather loose term when it comes to Climax – Noe is more interested in allowing the actors to improvise, with very little of the conversation expanding our understanding of the characters or progresings the storyline. So, we get to meet Selva (Sofia Boutella), the manager of the group and her partner Emmanuelle (Claude Gajan Maull) who has brought her young son along, a decision she later regrets. There is a lesbian couple who can barely stand each other, a brother and sister who are much closer than your average siblings, and DJ Daddy spinning the tunes. And then there is Selva’s boyfriend, David (Romain Guillermic,) a narcissist sleeping his way through the group, regardless of gender. 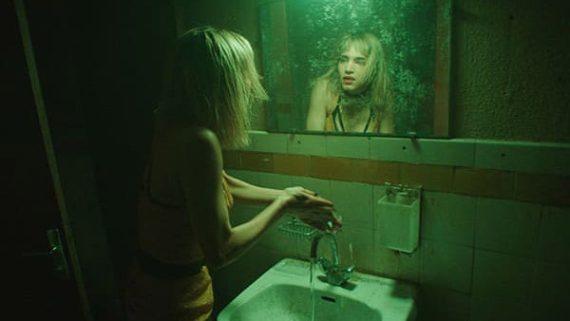 As the party rages on, fuelled by the sangria that Emmanuelle has made, it becomes clear that someone has spiked the drink with a powerful hallucinogenic. As the night progresses, the group descend into a spiral of paranoia, violence and depravity.

Climax was inspired by a 1996 news story that fascinated Noe about a similar group, and the chaos that can ensue when a mob fuelled by drugs and alcohol give in to anarchy. The director shot the film in a short two weeks, and unusually for a film production, filmed the scenes in chronological order. The cast were also tasked with improvising both the dialogue and the dances which does lead to natural performances from them, who, with the exception of Boutella, came from the dance world and were inexperienced actors.

As you would expect from a Gasper Noe film, visually it is stunning. The director knows all of cinema’s camera tricks and even creates a few of his own. The opening scene, an above shot of a snowy landscape as someone stumbles into shot and inexplicably creates a bloody snow angel, is striking and the camera work in the dance sequences are inventive and fluid. 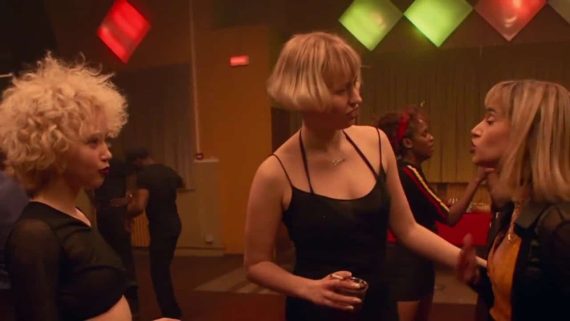 And it’s not just in the visuals that Noe has excelled. The soundtrack is absolutely perfect, as you would hope for a film that centres around dance. Even if you’re not a connoisseur of 90s house music, you’d have to be a corpse not to have your feet tapping to the sounds of Daft Punk or the all time classic, Pump Up The Volume by M/A/R/R/S.

Sadly though, the flipside to all this technical excellence is a film that is actually very boring. Critics of Noe say that his films have no substance and only exist so he can shock, and this time around I have to agree. By end of the film, I asked myself “Seriously? What was the point of that?”. It is a shame that Noe spent all of his time and effort on the visuals and made no effort to flesh out the characters and make them relatable. Sure, it’s fun to watch the cast go batshit crazy, but at no point do you feel any empathy with them. And the less said about the fortune cookie wisdom slogans that appear full frame throughout the film the better.

One of this generation’s greatest auteurs, Gaspar Noe has really dropped the ball with Climax. After viewing, the director obviously wants you to ask yourself questions about human nature, if modern man suppresses his true self and if he could open the door to his inner psyche would he revert to the true animal form. Unfortunately, the only question I could ask was “Why did I bother?”

The bonus material is the usual mix of featurettes and interviews. The best of the bunch being Disco Infernal: The Sounds of Climax, in which dance music expert Alan Jones discusses the songs used in the film and how they relate to French culture. Shaman of the Screen is also worth your time. Alexandra Heller-Nicholas’ video essay discusses Noe’s films and how he has changed as a filmmaker over the years.

Climax is released on DVD and Blu-Ray by Arrow Video. I reviewed the Blu-ray and it includes as extras:

• Audio commentary with writer-director Gaspar Noé
• An Antidote to the Void – a brand new interview with Gaspar Noé
• Performing Climax – newly-produced featurette comprising interviews with actors Kiddy Smile, Romain Guillermic and Souhelia Yacoub
• Disco Infernal: The Sounds of Climax – Alan Jones, author of Saturday Night Forever: The Story of Disco and Discomania, offers up a track-by-track appreciation of the Climax soundtrack
• Shaman of the Screen: The Films of Gaspar Noé – a brand new video essay by writer Alexandra Heller-Nicholas looking as Gaspar Noé’s evolution as a filmmaker
• Trailer