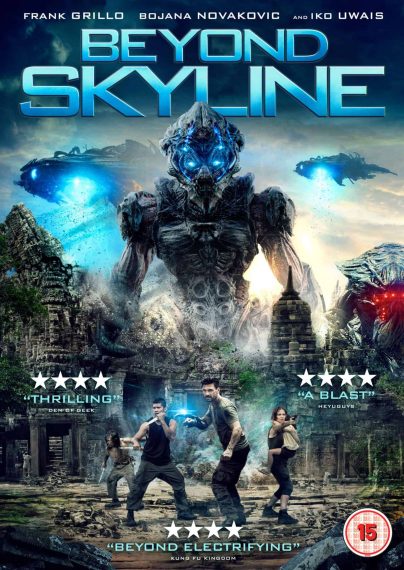 A good few years back The Brothers Strause (visual effects whizz kids) directed a little sc-fi film called Skyline that did fairly good business. Shot on a low budget it tells the tale of an alien invasion mainly seen through the eyes of a group of survivors holed up in an apartment block as the attack occurs outside. While not particularly favoured by the critical establishment the film has gained a cult following in part due to the creative alien design and impressive visual effects. One of the writers of the original, Liam O’Donnell, returns to pen the sequel and this time take up directorial reigns with The Brothers Strause on producing duty, delivering a sequel that is bigger, brasher and better.

Beyond sees LA cop Mark (Grillo) and his estranged son Trent (Weston) fending for their lives as the mysterious alien ships descend on Los Angeles sucking up humans by the thousands. Along with a selection of other plucky survivors, father and son first attempt to survive the incursion by navigating the streets of LA before then finding themselves in the bowels of an alien ship which after much fraught fighting they manage to crash in Southeast Asia. Here, they join up, after some initial resistance, with a local resistance force fronted by the tough no-nonsense Sua (Uwais) to take down the alien invaders once and for all.

Taking very much a throw-in-everything-but-the-kitchen-sink-approach to proceedings, O’Donnell and his crew up the ante in every possible way for this B-movie blast. The alien invasion goes global compared to the first film’s mainly one location setting; the creatures are bigger, badder and get much more screen time; thanks to Uwais and his team some fine martial arts action is introduced to combat the invaders; and come the finale there is even some awesome kaiju action that tops off a sequel that doesn’t know how to say no to adding more and more to its already full plate.

This both helps and hinders. There is a lot going on and a lot of character’s to juggle meaning certain sections of the film do suffer somewhat. The LA set opening nicely sets the stage but when the action switches to the intestines of the alien craft (well rendered through a combo of CGI and gooey practical effects) proceedings seem a bit rushed. Everything happens so fast on the ship, with characters fates met sooner than expected, the survivors of the first film referenced and the revelation of what the aliens are up to all flying by in a splurge of mushy alien FX and crunchy action. Before you know it, we’re in Southeast Asia. 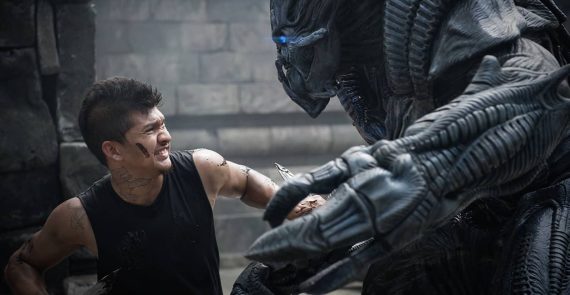 Arguably this is where the film excels. With the LA survivors teaming with a local group of fighters the pace finds its footing and the action is ramped up to feature the likes of Iko Uwais and Yayan Ruhian (from The Raid films) dishing out silat infused alien slaying action which is a sight to behold. Grillo is on fine gruff form (and seems to be the new franchise Viagra!) and the likes of Bojana Novakovic and Jacob Vargas make their characters memorable even if they’re sometimes hampered with cringy dialogue.

It threatens to buckle under its own ambition on occasion but thanks to a game cast, some fantastic visuals and action and a few unexpected narrative detours means Beyond Skyline always remains on track as a relentlessly entertaining B-movie sci-fi actioner. Fun stuff.