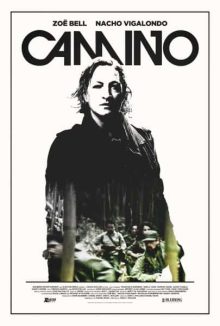 Stunt woman and all round awesome Zoe Bell gets a much deserved leading role in this punishing survival thriller. It’s a showcase for her considerable stunt and acting skills and she goes full throttle as an action heroine and as the human heart of a dark and desperate tale of survival in the jungle. She plays Avery a renowned photojournalist who is sent, despite her resistance, into the heart of the Colombian jungle to photograph a group of missionaries led by the enigmatic Guillermo (Vigalondo). Professing to be doing good and helping those in need, Avery soon discovers and captures evidence of Guillermo’s dark side and is then plunged into a desperate fight for survival as she flees through the jungle with the violent Guillermo and his followers in frantic pursuit.

Camino is a good film with a brilliant performance from its leading lady. It’s also, unfortunately, a frustrating film. On the one hand, and after a slow and creditable build up, it’s a ferocious survival thriller where our heroine must do everything she can think of to stay alive as she’s pursued through an alien environment. Becoming a solid fighter through necessity but never evolving into an over-the-top super heroine, Avery’s plight is taut, believable and full of confrontation. On the other hand, certain film-making choices hamper what could have been a satisfying tale of survival with the building momentum often lapsing into frequent bouts of inertia. This is mainly due to the wearisome need for every time a confrontation or action scene promises to erupt another pointless and seemingly never ending monologue starts up. That old bad guy adage of talking too much when they should be taking action is pushed to breaking point with pretty much all the antagonists having to wax lyrical about this and that when really the proceedings should be erupting into thrills and spills. This also means that main bad guy Guillermo, while competently played by Timecrimes and Open Windows director Vigalondo, is never as ruthless as he should be and just becomes a bit of a bore with his constant speeches and yapping. This works well for when he’s talking to his deluded followers but not so well when the chase and fight elements of the narrative should be ramping up. 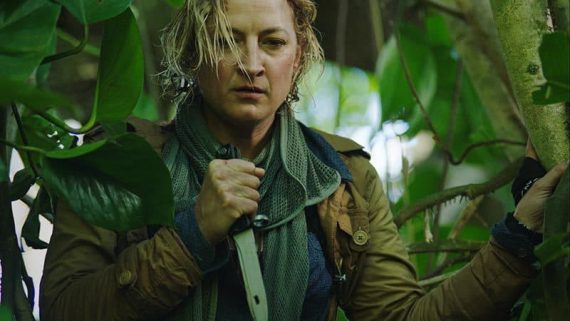 However, the maddening need for monologues by no means derails Camino. What the film nails is Bell’s believable character: she is tough, intelligent and vulnerable. While she is capable of handling herself in a fight she is by no means a super-soldier and really does have to fight for her life giving the confrontations and pursuits, when they are allowed to play out, a believable edge. The film doesn’t shy away from the brutality of Avery’s plight and a true sense of her being on her own is established well by the overwhelming jungle environment. The somewhat disorientating (but often effective) soundtrack adds to Avery’s own sense of hopelessness and her character is given convincing credibility by Bell’s committed performance. She’s fantastic here, whether having to kick ass or overcome her own doubts and fears, balancing the dramatic and the action perfectly.

Overall, Camino is a decent survival thriller that while doesn’t quite live up to its premise and frequently flip-flops between meditative drama and all out jungle exploitation, nevertheless builds to a surprisingly  dramatic conclusion and is guided by a fantastic central performance from Zoe Bell.

Camino is released from Metrodome  September 5th 2016 on various platforms.