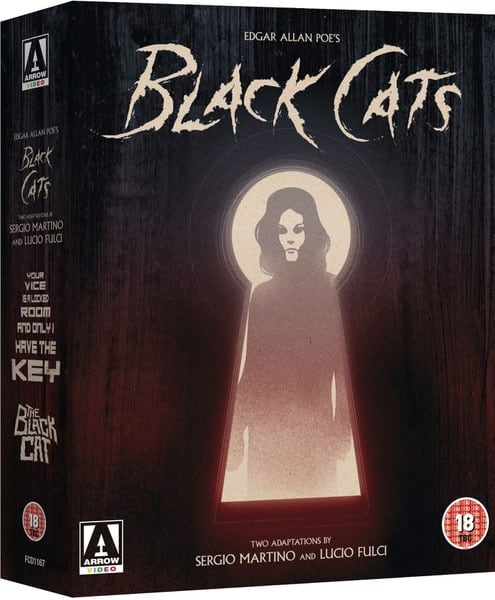 Here we have a fantastic Blu-Ray set in which you get not one, but two tails of terror based upon the classic Edgar Allan Poe tale, The Black Cat. Let’s start with perhaps the more well-known of the two,  The Black Cat, from renowned Italian director of all things gory, Lucio Fulci. It’s a classic murder tale, but with a feline twist.

The film opens on a sleepy English village with local shops, little post boxes, country cottages and a smattering of 1970’s vehicles parked here and there. The camera’s-eye-view stalks, cat-like, at a very low level along a village lane, following a man as he climbs into his car. As he pulls away he spots a black cat sitting in the car with him. He promptly appears to be hypnotised and lets go of the steering wheel, crashing the car and smashing head-first through the windscreen. The car then bursts into flames! If he wasn’t already dead, he is now! This all happens within the first 2 minutes of the film. This is going to be good!!

The death of a young couple in a boathouse store room brings Detective Inspector Gorley (David Warbeck) from the city to the village to investigate. Teaming up with an amateur photographer, Jill Trevers (Mimsy Farmer) who is visiting the village, they set about investigating the case; Jill documenting the crime scene evidence as the murders start to mount up.

A local professor, clairvoyant and recluse, Robert Miles (ably played by Patrick Magee) seems to be involved. He spends his spare time attempting to make recordings of people from beyond the grave and has the power to hypnotise. He also has a deep cat scratch on his hand, and the photographer soon notices similar cat scratch marking on bodies of victims, and cat footprints at crime scenes.

Jill takes her photographs to Robert and he confirms that it is the cat that is causing the deaths. She confronts him, accusing him of using the cat as an instrument to kill, but he refutes this saying that the cat forced him to act on suppressed feelings of hatred and that he cannot control it.

When Robert bricks-up an unconscious Jill, together with the cat, behind a wall in his cellar, it is the cat’s miaow that alerts Inspector Gorley and the police search team and implicates Robert; leaving him mumbling nonsensically about ‘the beast’ making him kill, and that he has become it’s victim by giving in to his own evil urges. The cat heads outside and again the camera returns to a cat’s-eye view as the feline saunters off into the night.

This was really a pretty good movie. The acting and scenery were both excellent, and Patrick Magee’s performance really takes the film to another level; so creepy as the elderly clairvoyant in his imposing oak-panelled manor house.

One theme within the movie that proved to be nothing more than a bit of crazy background detail was Professor Robert Miles’ interest in spirit recording. We see, in a couple of different shots, him sitting in his study, his face ashen as he listens intently to recordings of screams, of raspy voices speaking in Latin, and even to a child’s voice asking for help!. There is a chilling scene where he has set up his reel-to-reel tape recorder next to the grave of the car crash victim from the beginning of the film, and is capturing sound readings through his microphone (we don’t hear the sounds, but can see the audio meter on his tape recorder flickering). Sadly this is not really explored, elaborated on further, or worked into the central storyline – a shame as it’s pretty creepy!

Although this film is based upon the Edgar Allan Poe tale, interestingly it is the cat itself that appears to be the demonic force, rather than the man turning on the cat.

There are some interesting special features on the disc:

In the paw-prints of the black cat – a visit to some of the film’s locations. (Very interesting).

It is worth noting that Pino Donnagio’s musical score for this movie is also excellent and very atmospheric. 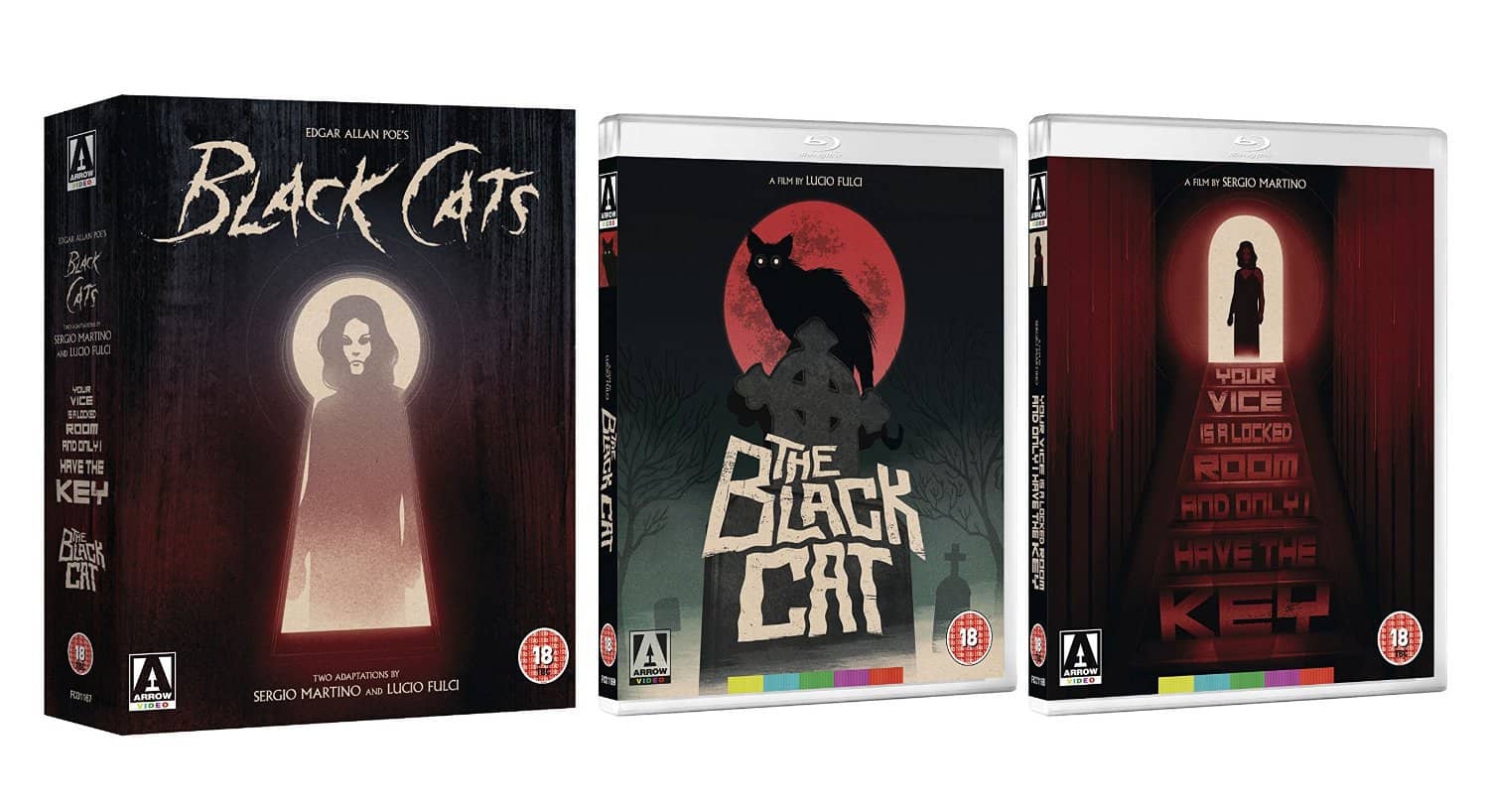 The second film here, titled either – ‘Gently before she dies’, ‘Two evil eyes’ or alternatively titled ‘Your vice is a locked room and only I have the key’, is again a great take on the Poe tale which manages to be a completely different story again, but nevertheless one where the outcome of the movie ties in with the Poe tale to create a brilliant climax.

Oliviera, the acclaimed writer and son of a recently deceased Countess has writer’s block, and lives a life of wild parties and drunken groping while his wife Irene looks on in dismay. The film opens with a lurid party scene in which, enraged by Irene’s lack of interest or participation, Oliviera tries to force-feed her alcohol, after which she storms off and he starts groping a servant girl while the 1970’s hippie throng sing a discordant song and a girl strips on a lavish banquet table…. Yep, already it’s a little weird!

A black cat comes padding into the now deserted dining room and sits on its master’s lap. Irene comes storming in wearing one of Oliviera’s dead mother’s dresses. Oliviera knocks her to the floor where he proceeds to molest her!

We learn that Oliviera is depressed at his diminishing skills as an author and has turned to drink and trying his luck with other women as a way to mask this. His poor wife seems at the end of her tether, spending a lot of time crying in her room.

A trip to the local bookshop sees Oliviera in an unpleasant altercation with the female employee. She is demanding money from him, and it appears that she was a student of his who he has had relations with. He is paying her to keep quiet and they arrange a rendezvous spot where the next cash payment is to be made to her.

The girl has her throat slashed at the rendezvous spot, and so begins a series of grisly murders. Each time Oliviera protests his innocence but is a generally unlikeable character, so we’re convinced he’s guilty. The death of a young prostitute throws a square peg into a round hole when the attacker is caught off guard and given a beating by the Madame of the brothel. Police reveal that he was a known woman-hater who had recently escaped from a home for the criminally insane. So this one isn’t Oliviera’s doing? The plot thickens.

Oliviera’s niece Floriana (Edwige Fenech) comes to stay, rejecting his pervy advances and eventually getting Irene to confide in her that Oliviera is a cruel sadist and has threatened to kill her if she ever leaves. She is his prisoner and has to do what he says and put up with how he behaves.

Flo meets a local motocross rider and they sneak off into an old house for sex. Oliviera is watching from the shadows. That night Irene hears a commotion outside and discovers that her beloved pet Doves have been killed by Oliviera’s black cat. In a rage she finds it and attacks it, stabbing it in the eye with a pair of scissors. Unbeknownst to her an old rag and bone woman is watching, horrified.

At first Flo seems repulsed by Oliviera, but ends up sleeping with him. It transpires that she has a game plan of her own – she wants her inheritance from the dead Countess. At a picnic in the mountains when Oliviera is out of earshot, Flo puts the idea into Irene’s head of escaping her life as his prisoner by killing him. 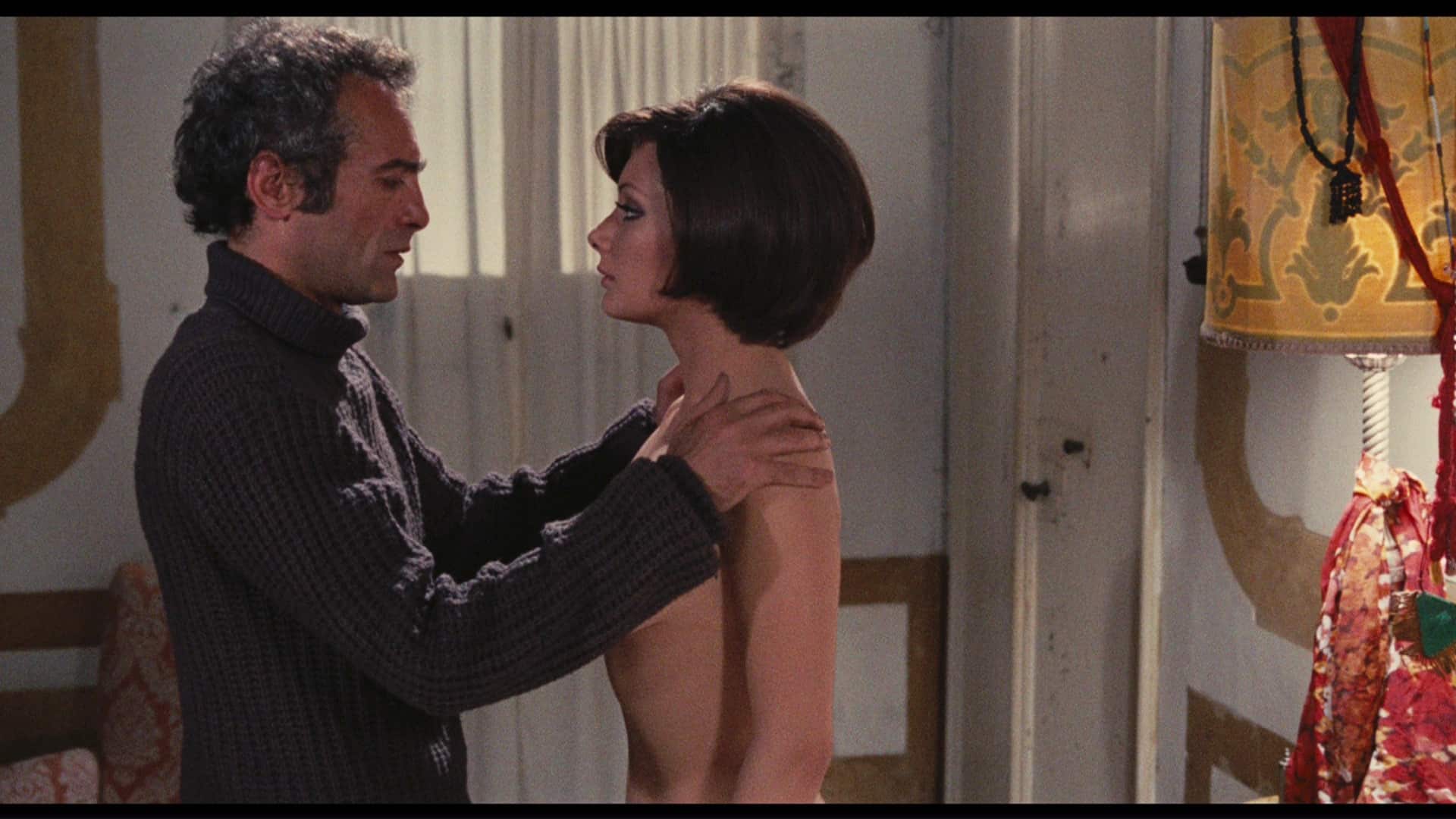 When Irene find Oliviera asleep in front of his typewriter, with “Kill her and hide her in the cellar wall” typed on the page, she stabs him in a frenzy and kills him. Catching her in the act Flo thinks that she can now blackmail Irene and takes the dead Countess jewels in return for not talking to the police. She heads off to meet for motorbike-riding lover so that they can leave together.

At this point a man who has only made one previous appearance, watching Flo’s train arrive earlier in the movie, emerges from the shadows. It transpires that Irene has planned all of this from the beginning, plotting to send her husband mad by letting him drink, murdering people herself and making him think it’s him, moving things around the house to confuse him and even killing his mother, the Countess!. All along she has not been weak and feeble but cunning and calculating.

When Flo and her lover skid on a patch of oil on a cliff top road, their motorbike crashing in a flaming fireball, Irene’s leather-clad accomplice simply arrives and collects the bag of jewels. Flo and her lover are unfortunately no match for the ruthless Irene. 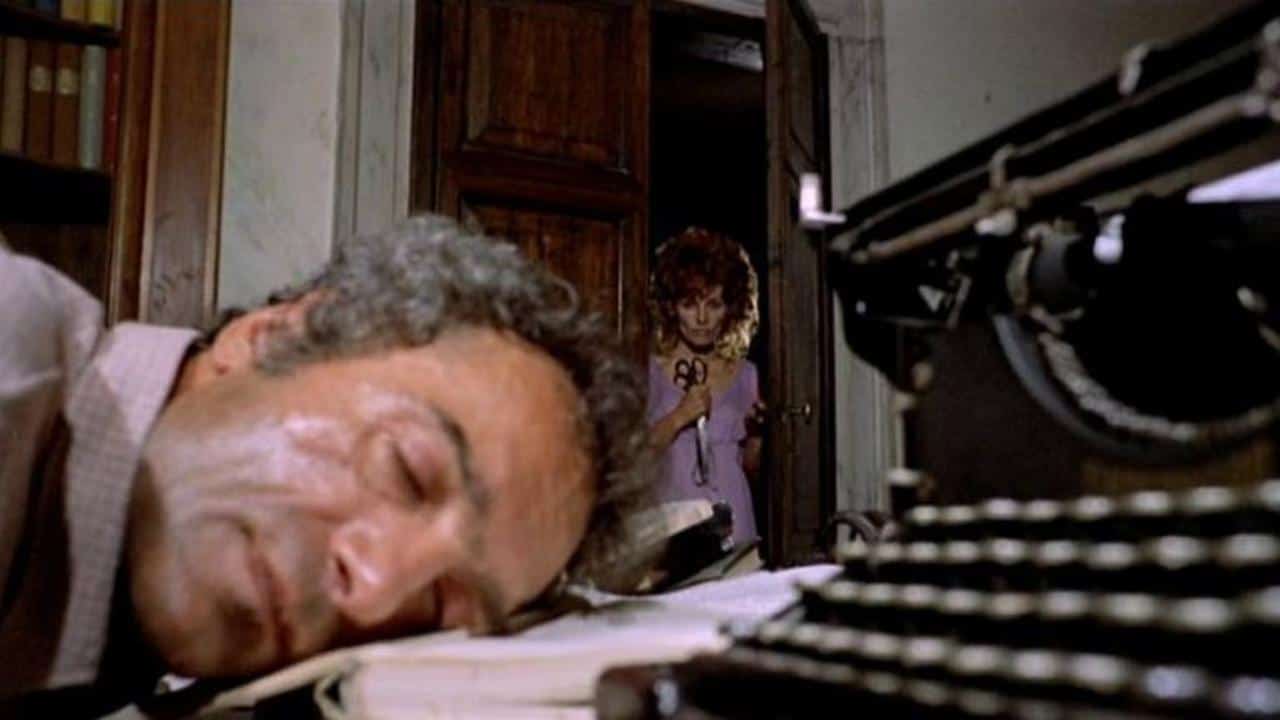 Irene and her accomplice / secret lover arrive at a cliff top where she plans to bring all of the bodies to dispose of. As he’s admiring the view she pushes him over; thus eliminating the one person with any claim to her wealth.

Back home with a swagger – the police are there. Irene struggles to stifle a laugh when they explain they are there because the old Rag and Bone lady reported ‘the tormenting of a cat’. Thoroughly at ease she lets them in. But, in a twist of fate, and like the other film here (and the Poe story) it is the Black Cat’s miaow from behind the cellar wall that alerts the Police to Oliviera and the other bodies behind the brickwork. As they break through and Oliviera’s face is revealed she starts screaming and freaking out!

Picture wise there is some grain here and there, but it’s generally very good; nice and clear and bright. The sound is also superb. It has a sensual seductive nature with gentle lighting and a subtle musical score. It’s very 1960’s in feel and more of a seductive thriller than the first movie, which is more classic horror tale.

Through the keyhole: An interview with Sergio Martino

Unveiling the vice – a making-of retrospective

Eli Roth on ‘Your Vice’

There are dvd and dual Blu Ray / DVD versions available (according to Amazon!). It is also suggested there that this is limited to 3000 copies, so get yours today!