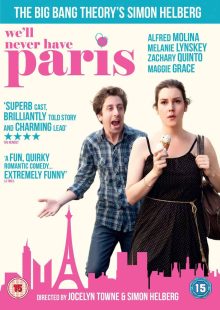 Awkward comedy and indie stylings are abound in Big Bang Theory’s Simon Helberg’s directorial debut. Sharing helming duties with real life wife Jocelyn Towne, the film is inspired by their real life relationship or rather an unfortunate episode from it. Helberg is Quinn a somewhat irritating, neurotic and prone to hypochondria New York twenty-something who when gearing up to propose to his long term girlfriend Devon (Lynsky) rather irrationally decides to break up with her when his hot blond co-worker Kelsey (Grace) all of a sudden confesses her love for him. Seeing a chance to score with a women seemingly out of his league, Quinn foolishly embarks on an affair with Kelsey, only to realise his mistake, then desperately tries to put his life back together and pursues Devon to Paris (where she has fled)  to win her back. Much Woody Allen-aping awkwardness and forced comedy ensue.

While Helberg proves to have impeccable comedy timing on the never ending sitcom, Big Bang Theory, he’s less successful here in what unfortunately ends up being a self indulgent mess that’s strains its flimsy set-up and increasingly annoying lead character to breaking point. Unfortunately, Quinn isn’t very interesting, sympathetic or, well, funny. Yeah he’s supposed to be irritating and narcissistic but after an hour is his constantly whining, self analysing and just plain insulting company, one is unlikely to care whether he reunites with his true love or not. In fact, Quinn’s whole panic, break-up and quest to reunite just isn’t that interesting and his constant over-mugging and insulting everyone and everything around him just becomes tiring: one doesn’t laugh at him for being such a self-obsessed buffoon but rather just wishes he would be quiet for two minutes. 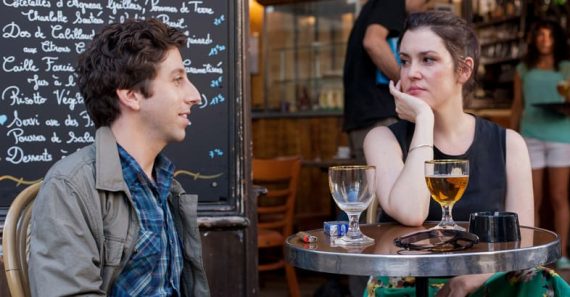 Still, while the plight of the main character isn’t that engaging the array of supporting characters and the lovely city of Paris do make proceedings more enjoyable in-between Quinn’s indulgent ramblings. The cast is sprinkled with familiar faces that often lighten the tone: Taken star Maggie Grace shows considerable comic chops, Star Trek’s Zachary Quinto has an amusing extended cameo as Quinn’s best mate, Lynsky is great as Quinn’s put-upon partner and the always reliable Alfred Molina, while in it all too briefly, is charming and amusing as Quinn’s loving father. Paris looks as lovely as ever and the choice of all French songs on the soundtrack is also a welcome treat.

While it’s a noble attempt to show how much of a dick an insecure man can be and then make one laugh at him, We’ll Never Have Paris regrettably just lays the narcissistic indulgence on too thick making it difficult to ultimately care what happens.