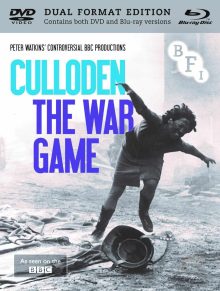 Peter Watkins is a British filmmaker that revolutionised the docudrama format in the 60’s when he wrote and directed two feature length BBC TV films, Culloden (a.k.a. The Battle of Culloden) and The War Game. The BFI have packaged these two films together and released them on dual format Blu-Ray and DVD. Below are my thoughts on each individual title and the features included in the set.

Culloden (a.k.a. The Battle of Culloden)

Through making Culloden, the then young Peter Watkins quickly became known as the golden boy of the BBC, even before the film was screened, as the first cut was so well received by his peers. With Culloden, he took a radical new approach to the historical documentary. Dramatically reconstructing the past was nothing new, but he did so whilst keeping the shooting style and presentation in line with modern documentary techniques. He took a subject from the distant past (the 1745 battle of Culloden, the last battle fought on British soil and last attempt to overthrow the king) and made it look as though TV cameras and documentary crew were there on the scene to capture it.

This approach gives a feeling of authenticity to the content, which is important as Watkins’ film seeks to crush the myth that the Great Britain we now know was forged on freedom and honour through glorious battle. Instead we are shown the stupidity and cowardice of ‘Bonnie Prince Charlie’, whose incompetence and poor choice of military advisor dealt a decisive victory to his enemy, the loyalists. After the shambolic massacre of the battle, we then witness the systematic murdering, raping and pillaging of the king’s dissenters, as the loyalist troops tear their way back to England through the Highlands. 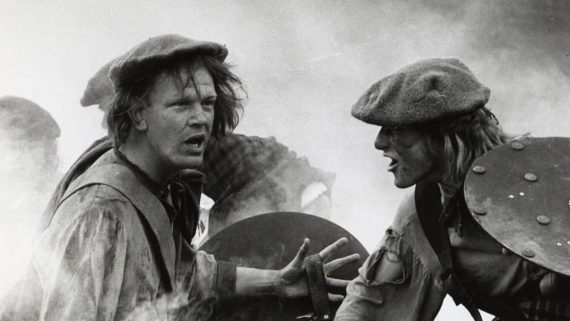 It’s a powerful film, with some intense battle scenes. Watkins’ resources were meagre (the budget being a scant £3,000) so the lack of wide shots of great armies is noticeable, but through keeping shots tight and handheld, cutting quickly, the scenes remain effective. It’s not quite up to modern war movie standards, but its raw, close-quarters approach still manages to horrify at times. A brutal execution shot from a first person perspective is particularly shocking.

Watkins uses largely non-professional local actors, reportedly to better educate them in their own history as much as to save money or add authenticity. This does provide characters that look and act like ‘real people’, although some amateur dramatic types ham up their lines from time to time.

The film has dated somewhat in its presentation as documentaries have moved on over the years, which is why I haven’t given a higher rating, but I can’t deny its importance. It was way ahead of its time and largely remains a powerful, unflinching account of a pivotal moment in British history. Through digging into the facts behind the battle and what it must have meant to the average people at the time, Watkins also made his film relevant when released in the 60’s and still now, which was quite an achievement.

Where Culloden helped make a name for Watkins at the BBC, The War Game effectively ended his career with the broadcaster. Although the film has seen wide acclaim over the years (even winning an Oscar for Best Documentary Feature in 1967), its brutal, unflinching portrayal of its subject matter proved too much for the BBC, who effectively banned it from broadcast for around 20 years (even though they themselves commissioned it). Thankfully it was allowed a cinematic release (thus the Oscar) and its reputation grew, eventually leading to a TV screening in the 80’s.

The War Game takes Culloden’s ‘authentic’ docudrama approach to examine something that could happen rather than had happened. This controversial documentary shows the audience what could conceivably happen if Britain was subject to a nuclear attack. This is no ‘Duck and Cover’ style government approved fluff designed to placate the masses during the Cold War though, The War Game is an anti-war film showing the horrifying realities of the wave of death and decay caused by a nuclear strike. 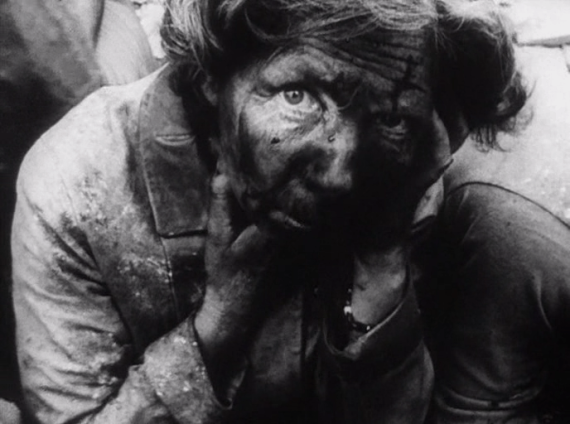 And the film truly is horrifying. All the Saw’s and Paranormal Activities in the world couldn’t hope to elicit the sort of nightmares brought on by The War Game. From the panic as people rush to the feeble ‘safety’ of their bunkers to the visceral intensity of an ensuing firestorm, the film has the power to shake you to your core. Even more disturbing than the immediate effects of the blast is the aftermath though. With so much destruction and loss of life, the lengths the survivors have to go to clean up and keep on going is grim. From the police ‘putting down’ those past medical help to executing looters, Watkins doesn’t shy away from the scarily believable possible reactions from the general public and government.

Another frightening aspect comes from a seemingly innocuous source. On top of the dramatic reconstructions, Watkins records some vox-pop style interviews with the real general public to get their opinions on how Britain should act during a nuclear attack. The chilling side comes from their universal agreement that we should retaliate with equal force, should anyone target the country with nuclear weapons. These opinions, when matched with the horrifying depictions of the results of nuclear warfare, make you realise how sickening and senseless a cycle of destruction it would create.

Once again, Watkins’ cinematic techniques are very effective, although there are dated elements here and there as well as some hammy flourishes from the amateur cast. Nevertheless, he created one of the most brutally powerful war movies ever made and one that should be mandatory viewing to everyone (not banned as the BBC saw fit), to help steer the world away from the evil of nuclear war.

Culloden & The War Game is out on March 28th on Dual Format Blu-Ray and DVD in the UK, released by the BFI. I watched the DVD version and the films both looked and sounded very good.

You get quite a few special features included in the package. Here’s the list:

– Michael Bradsell Interview (2015, 21 mins): the film editor talks about working with Peter Watkins at the BBC
– John Cook audio commentary on Culloden (2002)
– Culloden on Location (Donald Fairservice, 1964, 8 mins): colour footage of the cast and crew during the filming of Culloden, with a 2002 commentary by John Cook
– Patrick Murphy audio commentary on The War Game (2002)
– The War Game: The Controversy (2002, 19 mins): Patrick Murphy charts the production history, banning and eventual distribution of The War Game
– The War Game book: on-screen gallery of the complete 1967 book, published to accompany the film

It’s a great selection of features which provide pretty much all you need to know about the two films and Watkins in general. The Culloden commentary in particular is very thorough and illuminating. The ‘Culloden on Location’ featurette was better than I expected too, with a voiceover adding context to what we’re watching and giving an idea of the shooting techniques and conditions. ‘The War Game: The Controversy’ is also a must watch, giving the full story on the troubles Watkins had trying to release his film.

You also get the customary booklet included in the package, which contains writing about the films as well as full technical and credit information.