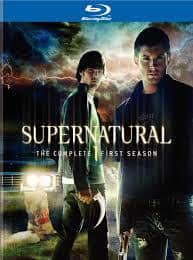 Okay this has got to be one of my favourite reviews I have done. I was lucky enough to be offered the chance to review the first nine seasons of Supernatural and I was hoping to get them all watched so I would be able to do it all as one review. Unfortunately due to time constraints I had to do the review for what I have managed to watch so far which was season one. This has actually worked out better for me as I can now give each season the attention it deserves in each review. So this is going to be review one of nine. I can’t wait.

Where to start on this superb programme? How about with the storyline. It all begins with a murder by a demon. The demon tried to steal baby Sam Winchester from his crib and when confronted by his mother he pinned her to the ceiling and engulfed her in flames. Their father races upstairs in time to grab Sam and give him to his elder brother Dean  telling him to get them both out Safely, but is unable to save their mother. This leads him to hunt the demon and raise two children. Twenty two years later Sam is at college and dean finds him to tell him that their dad is missing after going on a ‘hunting trip’. The brothers travel around the U.S.A hunting down many supernatural entities ranging from demons to vengeful spirits, whilst trying to find their father and track down the demon that killed their mother.

This is an outstanding story not only of hunting evil beings but also of two brothers trying to deal with their differences within times of great stress. The character development in this programme was magnificent and the storyline compelling to the point that I found myself watching episode after episode just to see how it would all develop.It is cleverly written and even rather funny while being serious at points. The soundtrack in it is excelent  consisting mainly of classic rock music.

This is the brainchild of Eric Kripke who is best known for this and Revolution and in my eyes this program shows his true talent. I also want to point out the amount of research he did with certain legends and stories of the occult. Also bringing this spell-binding series to life we have Jared Padelcki who also starred in the Gilmore Girls and House Of Wax, playing Sam Winchester with such vigor that you can truly feel the emotions of his character. Starring alongside him as his brother Dean Winchester we have Jensen Ackles who is best known for Dark Angel and My Bloody Valentine. He plays the badass in this show so well but also brings his fears and weaknesses without breaking the characters image. A massive congratulations goes out to the special effects team too as well as the makeup artists.

This wonderful season is available in the season 1-9 Blu Ray box set which is available now and I can’t wait to continue viewing this as well as write the next review. This is a must have solid tv show. As a little extra here is a behind the scenes photo that really makes me wish I could have interviewed these two very funny and superior actors.