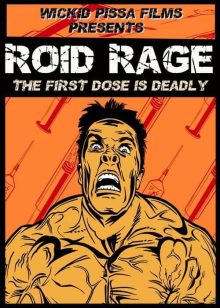 Roid Rage kicks off with the obligatory mad scientists and has a feel of J.R. Bookwalter’s The Dead Next Door. I was expecting a zombie gut muncher, but that’s not what’s on offer here; it’s more of a spine-cracker.

Billy Beck deals steroids, but makes a big boob when he decides to put in an order to good old Blighty for a designer drug containing livestock product. Who would be dumb enough to inject this stuff, you cry, well this lot!

Beck sells his drugs at Jack’s Jacked Gym, but not content with buying mad cow riddled steroids he decides to get everyone together on Depot Island for a local amateur bodybuilding show ‘The Mega Muscles Contest’, chuckle – he’s just asking for trouble.

The jolly spectators head out to the island for a day of fun, fun, fun, so now genius Beck decides to inject the contestants with the experimental drug; you couldn’t write it…oh, you did. Ripped muscles and some decidedly chubby body builders flex their stuff…and then the ketchup really hits the fan.

Mad cow and steroids, as you’ve probably already guessed, aren’t a good mix. The happy crowd are rushed by the maniac mutating body builders and soon the raspberry sauce is flying in Roid Rage.

The DEA are on the island to take Beck down, but now they are forced to team up to survive the ensuing onslaught. At this point Beck screams: ‘These are my friends…how do I kill them?’ Titter – you can’t get much lower than this guy.

There are some nice spine-cracking sound effects and the principal mutation has a nasty case of too much eye shadow and tomato ketchup ear. In my humble opinion a few more close ups of the gratuitous violence, with more blood and eye popping puss mutation would have really added to this frolic. More blood is needed when you mash someone’s skull with a tyre iron and baseball bat, but I did enjoy the attack of the tanned bikini monster.

To be fair something different has been tried here, and there’s good sound and decent enough photography, with some surprisingly good acting and an enjoyable soundtrack. All in all a good fun romp to check out on Saturday night with your mates; let rip, kick back, crack a can and take a bovine spongiform trip into insanity.

You can watch the entire film for free below: