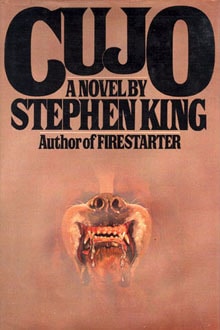 Stephen King is undoubtedly a master of horror writing (lets not get into this argument – it’s hard to maintain that level of brilliance when you’re producing them at a rate of knots – see also: Pratchett, Terry) and his imagination knows no bounds for things to creep us out and scare us into sleeping with the lights on. The horrifying and haunting Pennywise from It or the singular finger poking from the drain in The Moving Finger, all serve to scare us witless, and the limitlessness of the unknown horrors of the world is enough to keep us awake all night. Cujo doesn’t deal in this kind of horror – there is nothing supernatural about this dog, and nothing otherworldly about the circumstances of the novel and nothing anyone could have done to stop these events unfolding. This is what makes it so chilling.

The novel focuses around two families; the Cambers, Joe, Charity and Brett who Cujo lives with, and the Trentons; Vic, Donna and four year old Tad. The Trentons have a terrible old car on it’s last legs, which Vic encourages Donna to take to Joe Camber to have a look over while Vic leaves town to try and save his failing business.

It’s not been a good day for Cujo, who was bitten by a bat after getting his head stuck in a cave opening. The novel takes us into Cujo’s confused and disorientated mind, allowing us to share his rabid confusion. The Cambers Boy, Brett, is worried about his missing dog, but when Charity takes him on a trip to see her sister his worries are soon forgotten. Soon Cujo is all alone with the blinding rage and hunger the rabies builds in him.

The novel’s body count isn’t too high or too gratuitous. After picking off the neighbour and Joe Camber, Cujo seeks refuge from the burning sun in the barn. All this time, Donna and Tad have been trundling up to the Cambers house, hoping to get the car fixed. As they roll into the driveway the car cuts out and they find themselves in a dead car with no one around but Cujo. Here begins a desperate stakeout between the car and the ever-intensifying madness of Cujo, who begins to throw himself against the car to get at the people inside.

The most frightening aspect of Cujo is it’s stark reality. In the introduction to one of his short story collections, King talks about showcasing to us the thing we’re all afraid of: our own death. However, wherever and at the hands of whoever it may be, King is not afraid to offer us just one more possibility as to how we might meet our end. There is nothing supernatural about Cujo and the novel works hard to give us his muddled and confused point of view in order to confuse and challenge how we decide who the bad guy is.

The success of Cujo is the sense of dread it builds within the reader. There is a tangible inevitability to the solitary woman and her four year old son coming face to face with a rabid St Bernard and we readers, having seen how easily Cujo eviscerated two fully grown men, know very little stands between them and their death. For the meandering reader the question then arises; what would I do? Would I make a dash for the house and leave my child alone in the car? How long would I wait in the blistering heat without food before taking drastic action to save myself and my child? This quiet, intense dread fills the car, the page and, ultimately, the reader’s mind. The brief interludes into Cujo’s mind allow us to see the lack of malice and intention and as such, the lack of control over himself and the events that will unfold.

Donna meanwhile is desperately trying to figure a way out of the car to get help, but after an encounter with Cujo that leaves her with a chunk missing from her leg and stomach, she retreats back to her starving child. The novel builds a delirious tension from the moment Donna pulls up on the Cambers drive, and continues this stomach clenching intensity throughout. The convenient saviours rarely arrive in King novels, and Cujo is no different. The suspense of the novel builds to a horrifying and unsettling climax, and I found myself desperate for the ordeal to end. In horror fiction worlds saturated with ghosts and ghoulies, King delivers a slice of bare boned fear and traps us with it in a broken down car in the midday sun. For fans of horror, Cujo is a rare treat; unembellished and uncomplicated but absolutely terrifying. For those of you who are already scared of dogs it’s perhaps best left alone.