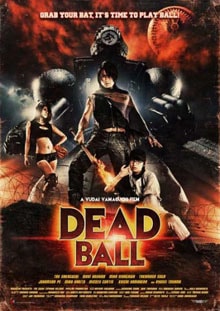 Baseball prodigy, Jubeh Yakyu (played by Yudai Yamaguchi’s regular Tak Sakaguchi) is the most feared juvenile delinquent in all of Japan. After accidentally causing the death of his father he becomes a full-time criminal until he’s arrested and sent to the Pterodactyl (!) Juvenile Reformatory. The headmistress of the bizarrely named borstal, Ishihara, is the granddaughter of a former Nazi collaborator and she runs the prison with an iron fist with the help of her sadistic assistants and guards.

Our anti-hero, Jubeh, is presented with an ultimatum by the prison authorities, that he has to join the school’s baseball team, The Gauntlets, and play in a national tournament or bear witness to the death of his cellmate, the wide-eyed and innocent Four-eyes, who is quite obviously a girl disguised as a boy, although no one seems to notice this! However, it soon becomes apparent that the reformatory governor hasn’t told them everything when they realise they’ve been set up to play Deadball, a version of baseball that frequently proves to be fatal to its participants.

Deadball is an unofficial follow-up to the director’s earlier film, Battlefield Baseball, although according to the DVD extras it’s not intended to be a sequel; it just happens to share half the same cast in similar roles as before. Sequel or not Deadball is a hard film to keep up with, as it doesn’t make much sense at the best of times, although fans of this type of film will lap up the over-the-top splatter and crazy sfx heavy set pieces, of which there are many. 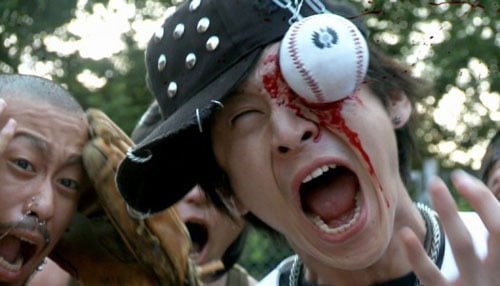 Sadly the special effects are frequently not so special with some very dodgy looking CG blood spraying merrily away in a few too many scenes. Some of the prosthetics fare better though and when the effects are actually done in-camera the film is fun to watch. Like many Japanese films of this ilk Deadball suffers from having huge ambitions, but without having the resources to make the director’s vision look particularly convincing up on the screen, which results in something that tries to look like live action Manga but instead looks, well, just a bit manky!

Highlights of the film include a funky baseball theme tune and John Carpenter like score, a very silly martial arts fight involving our hero throwing salt into his enemy’s eyes, some easy on the eye femme fatale baseball opponents and some inventive death scenes, usually involving baseballs with attachments hitting people in the face at high speeds. There’s also an amusing running gag with our hero repeatedly being handed a lit cigarette from off screen. I suspect the actor involved may have suggested this gag to give him an excuse to smoke since it would seem he’s a chain smoker off screen too!

The film is well shot and is pretty inventive, but some of the humour wears a little thin by the second half and the plot becomes really confusing come the final third of the film. Plus, for a film with the title Deadball you’d expect to see a bit more crazy sports action than you do; the Deadball match doesn’t actually start until the last 40 minutes of the film. I’m also not sure if the film needed the nazi elements in it, the headmistress was crazy enough without having that kind of background. 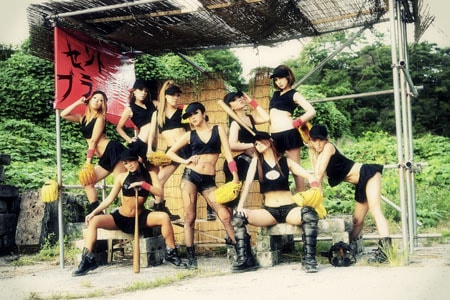 The film certainly has some memorable scenes throughout its overlong running time, including the inmates being made to eat vomit for breakfast, newly arrived inmates being fisted by the wardens looking for smuggled items, a scene, which play homage to Evil Dead II, where our hero beats up his own hand, and a scene where one of the team, known as Ratman, gets killed by a giant mousetrap! Well it is a very cheesy movie (pun intended).

Overall Deadball is an average, if rather other-the-top, Japanese comedy horror film, which features a bit too much craziness for its own good, not enough characterization, too much OTT acting and a disappointing ending.

Deadball has recently been released on DVD and Bluray by Bounty Films and there are a plethora of extras that come with the film.

There’s a brief making of documentary that confirms that it was a fun shoot and surprisingly reveals that they storyboarded almost everything. There’s a short film, which follows on from Deadball, which has some cool ideas but falls a bit flat in the end. There’s a spoof ‘welcome to the school’ welcome video as two people sit at a desk and use picture cards to illustrate what happens if inmates try to escape – it’s not pretty! There is also some footage of the director, writer and some cast members at the film’s premiere (I think) talking about their experiences, which is quite amusing.

The extras disc also includes a trailer, a cast reunion from another festival, some brief cast interviews including a rather pertinent comment from our leading man who describes the director’s work as ‘being like a collage of ideas’, which is very accurate and finally there’s probably the strangest DVD extra of all time – a mini documentary about the lead actor’s sister getting married – yes, that’s right, they basically included a wedding video in there too!