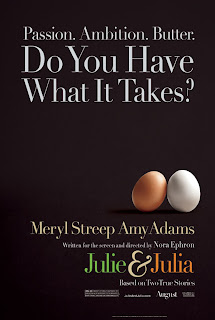 I approached this film expecting the worst. It looked and sounded like a typical ‘chick-flick’, an opinion not helped by the fact that it was written and directed by Norah Ephron, the genre’s Queen. It also claimed to be based on ‘two true stories’; one’s bad enough for me as I’m of the opinion that Hollywood tackling real life rarely succeeds in awkwardly balancing truth, drama and inoffensiveness. And finally, I turned up to see the film early on a Sunday morning with a sore and uncomfortable hangover. In fact, the only reason I was going to see the film was because I got free tickets and I kind of thought this would be an excuse to really lay into something on my newly resurrected website.

Well, I’m kind of embarrassed to say that I was proved wrong. OK, it’s not a brilliant film, but it was much better than I expected.

Julie & Julia sets the stories of two women side by side, one the trials of famous chef Julia Child (played by Meryl Streep) as she works to write and publish her phenomenally successful first cook-book, and the other the story of Julie Powell (Amy Adams), a hard-up office worker who decides to write a blog charting her mission to cook every recipe in Child’s book (a hefty 500-odd recipes) in one year. 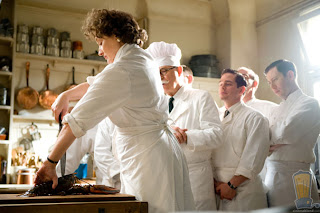 It doesn’t sound like much of a premise for a film, but somehow it works. It’s helped largely by some impressive performances. Streep is flamboyantly over the top in capturing Child’s mannerisms and personality, yet avoids caricature by using these to create an incredibly likeable and surprisingly funny character. Adams on the other hand draws a warm and believable Buy Levaquin Online Pharmacy No Prescription Needed performance that is less flashy, but helps ground the film when needed. 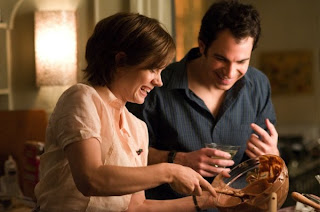 That said, the film does have it’s problems. For me, the film just didn’t have enough drama to fully engage for it’s two hour running time. It’s an incredibly light film with conflicts you rarely feel can’t be easily resolved. Everyone involved is always so nice and cheerful it often seems a little too much sometimes. Schmaltz is generally avoided as much as possible though despite the nature of the film and the sort of cringe-worthy scenes I expected never reared their ugly heads. Only one scene bothered me, a piece of character development featuring Julie’s more successful friends that is painfully obvious and clumsily handled.

All in all, Julie & Julia is very likeable and gently entertaining, but far too light to be overly memorable.