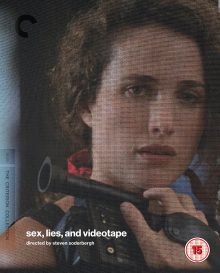 sex, lies and videotape is often referred to as important and influential. In their blurb for this new special edition, Criterion say it “changed the landscape of American film.” Released in 1989, it was the first instance of the 1980s resurgence in independent cinema to find mainstream commercial success in theatres, taking $24 million. It was also the first American film in nearly a decade to win the Palme d’Or, beating Spike Lee’s Do the Right Thing and starting a run of three consecutive US victories at Cannes. Viewed today, it is hard to square the contents of the film with its outsize past achievements. sex, lies and videotape is excellent in many ways, but its extraordinary success was as much down to context and external factors as anything within the film itself.

For his debut feature, Steven Soderbergh deliberately wrote a screenplay that could be achieved with modest reserves of finance and experience. The story is tightly focused on four characters: a repressed woman and her philandering husband, her sister, and his former college friend. At the outset, the woman (Ann, played by Andie MacDowell) is in denial both about her uncomfortable attitude to sex, and her husband’s unfaithfulness. What she doesn’t know is that her husband (John, played by Peter Gallagher) is having an affair with her free-spirited, artist sister (Cynthia, played by Laura San Giacomo). Into this powder keg environment arrives Graham (James Spader), who John hasn’t seen in years and who turns out to be exactly the spark needed to blow up everybody’s lives. Graham is a mess; disgusted by his own history of infidelity and deceit, he now lives in his car, spurns polite society and pursues the one thing that can give him sexual gratification: taping interviews with women about their sex lives, that he can then watch back alone. Intrigued by this strange new presence in their lives, the other three are drawn into a series of confrontations and discoveries. 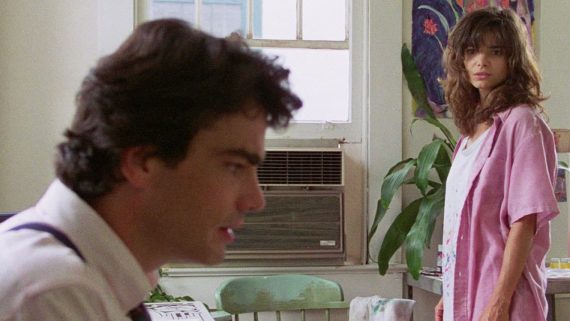 Famously, for a film about people’s sex lives, sex, lies and videotape contains no nudity, and very little graphic discussion of actual sex acts. Instead, it’s interested in the role sex plays in its characters lives, in terms of their understanding of themselves and their relationships with each other. Soderbergh has said that his inspiration for the form of the film came from the Mike Nichols classics Who’s Afraid of Virginia Woolf and Carnal Knowledge, and it certainly shares their faith in the cinematic potential of dramatically charged conversation. With the exception of a few tricky cuts and camera moves, Soderbergh is happy to let the characters take centre stage, and the results are gripping and often surprisingly funny. Here he is helped by the exceptional performances from the main quartet.

Yet for all its messy subject matter, the film has a narrative neatness that places it nearer studio filmmaking of its period than either Nichols’ films of the 1960s and 1970s, or many of the other films coming out of the independent scene in the 1980s (not least Do the Right Thing). By the end, characters have overcome problems, the worst of them have been punished, and a new couple has been created. In contrast to much of Soderbergh’s later work, sex, lies and videotape is happy to conform to audience expectation. It is in this context that its popular success makes sense. Coming at the end of a decade when studios had radically cut back on adult drama and controversial subject matter, it offered a smart, accessible, scandalous-but-not-too-scandalous update to the types of movie Hollywood had left behind in the 1970s. It was also expertly sold by rising independent distributors Harvey and Bob Weinstein, who had spent the last few years refining their understanding of how multiplex audiences could be lured into watching independent cinema. Their strategy combined prestige with titillation; in March 1989 they had released British adult drama Scandal, taking it to $8 million at the US box office. In many ways, their handling of sex, lies and videotape was a refinement of that earlier campaign. It was the right project at the right time, a fortuitous meeting of a talented, savvy filmmaker with hungry, skilled promoters.

Both the visuals and audio are exceptional. The special features detail the effort that went into the remastering process and it shows. Despite much of the action taking place in hushed, gloomy interiors, every detail is clear. With so much of the action relying on tiny gestures and changes of expression, the improved clarity really makes a difference to the overall experience.

The package of special features is extensive and very impressive, although it is for the most part tightly focused on the moment of the film’s production. There’s a nice half-hour documentary featuring new interviews with three of the four leads (Spader is missing) which emphasises what a positive and creative experience it was for all involved. Spader appears separately in a fun five-minute 1989 clip from the Today Show where he talks about what attracted him to the project, and his surprise at its (and his) success. A deleted scene featuring more of McDowell’s character with her therapist is included with optional Soderbergh commentary.

Perhaps the best two features both feature the film’s sound editor, Larry Blake. In the first, he chats with the film’s composer, Cliff Martinez about their memories of the production and its impact on their careers. Both are good company and discuss their achievements with a lot of self-deprecating humour. Blake then returns alone with a video essay detailing the fairly horrendous sound-mixing problems faced on sex, lies, caused in large part by a loud generator the crew used to power their equipment. Blake systematically demonstrates the differences between the originally recorded sound, and how it was filtered for the theatrical release, and then again for Criterion. The improvement each time is astounding and the feature is a great glimpse into a little-publicised but essential part of film production.

Soderbergh appears in a new 8-minute introduction, entertainingly discussing the film in the contexts of his career, and how it fit into Hollywood at the time. More of this would have been welcome. Elsewhere, he appears in archival material: two short interviews from 1990 and 1992, and then on an old commentary track from 1998. For the commentary track, Soderbergh brings in filmmaker Neil Labute to talk with him, and the result is an informative, wide-ranging discussion on the art of directing and the difficulties of filmmaking. At the time, Labute was making Your Friends and Neighbours and Soderbergh was about to start Out of Sight, so both men were caught at interesting crossroads in their careers. Soderbergh briefly addresses the Weinsteins’ input into the marketing on the track, and this is picked up in the final extra: a pair of trailers, one cut by Soderbergh, the other by the Weinsteins, which neatly summarises their different ideas regarding the film’s appeals.