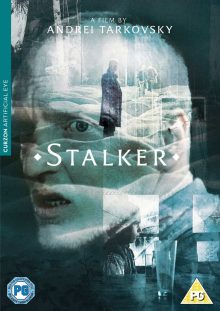 My trip through the work of art-house/world cinema heavyweight Andrei Tarkovsky continues with Stalker, from 1979. Like Solaris, this is one of his films I was simultaneously most looking forward to and most wary of. It’s highly regarded (as are all of his films) which got me interested, on top of the sci-fi focus, but it also sounded like it might be the slowest moving and most bleak title of his oeuvre. So, although I had no doubt that I wanted to watch and review the film, I was a bit hesitant to put it on once I’d received the screener. As is too often the case these days (due to having two young children) I was far too tired to take on such a heavy film and ended up watching it in two parts, but I made it through though and managed to appreciate the extraordinary work Tarkovsky had done.

Stalker is set some time in the future when a large area of the country (presumably somewhere in The Soviet Union) has been cordoned off with barbed wire and armed defences. Known only as The Zone, this area is off-limits to everyone and believed to be highly dangerous. Gifted individuals known as Stalkers have special abilities to be able to navigate it though, to take people to what is special about The Zone, The Room. The Room is believed to be a place that can make true the inner most desire of those who enter. Our protagonist is an unnamed Stalker (Aleksandr Kaydanovskiy), who has been hired to guide The Writer (Anatoliy Solonitsyn) and The Professor (Nikolay Grinko) to The Room. As they make the long, treacherous journey out of the city and across The Zone, the three of them argue about the meaning of their lives and the importance of faith, among other things, culminating in a dilemma as they reach the threshold of The Room.

And that’s it, on the surface. It’s incredibly stripped down in terms of narrative, even more than Solaris perhaps. Other than framing scenes at either end showing The Stalker with his wife and disabled child (common in those with a Stalker parent), most of the film consists of the three men slowly trudging through the remnants of their former homeland as they have philosophical debates. This may put off many, in fact it’s why I was wary of sitting through it beforehand, but, like the other Tarkovsky titles I’ve reviewed, it’s worth giving it the benefit of the doubt. 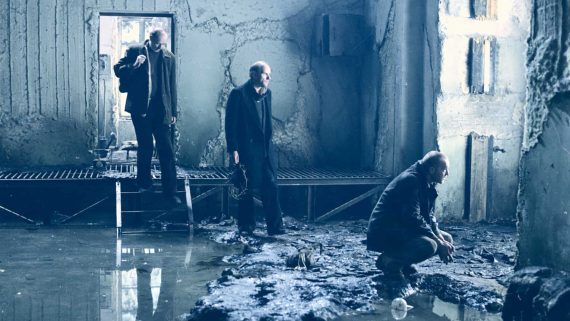 It is a slow film, I won’t deny, and isn’t an easy watch. However, there is more excitement than I expected. It’s hardly a Bourne film, but the early scenes as they try to evade the armed guards at the edge of the city do provide some thrills. Throughout the film there are a number of tense scenes in fact, as the group tread carefully through the rough terrain, constantly in fear of traps. Other than a shot of a deep watery pit, we never really see any obvious physical traps as such, but the film does a great job of creating unease through the unknown. The Writer and Professor don’t really know what to expect and The Stalker tells of how unpredictable and constantly shifting the unusual powers of the Zone are in putting them off course and in danger. So every footstep seems risky.

Don’t expect a thrill a minute though. This is slow moving and deeply philosophical but, although I’m not usually enamoured by films that are largely made up of lengthy spoken debates/monologues, I did find some of the discussions here genuinely thought-provoking. There’s a quiet, seemingly oblique revelation at the end too which opens up further avenues of discussion, on top of being transcendentally beautiful. The journey the three men take is literally difficult though, with the world around them relentlessly damp and the terrain rugged and derelict-looking. They are constantly forced to take the most difficult route possible, according to The Stalker’s ‘rules’. So the slow pace and talk-heavy story is doubly tough going to watch as our protagonists are constantly struggling. 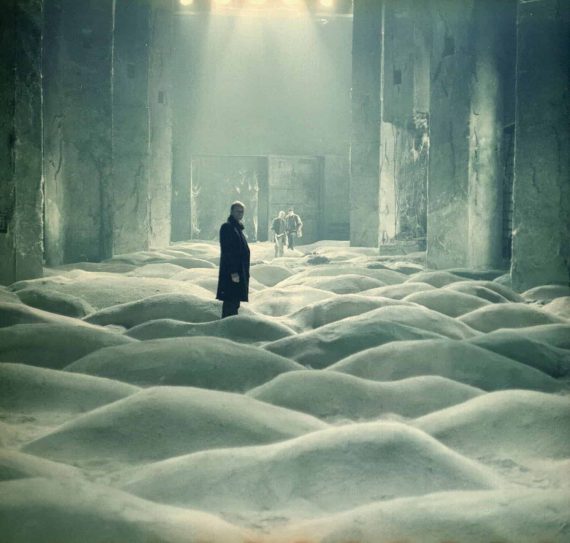 What drew me into the film though, like in all of Tarkovsky’s work, is his mastery of the cinematic medium. As with Mirror and Stalker, the film flits between monochrome and colour, keeping the scenes in the city a dark, oppressive brown and those in the Zone more natural looking (if still quite drab) colour. Throughout the film, but in the monochrome scenes in particular (largely because of their unnatural colour), each frame looks like a work of art. The mis-en-scene is meticulously controlled and the imagery frequently striking. A stand out scene is a surreal sequence where the group appear in a room filled with small sand dunes. Tarkovsky’s use of minimal sound effects and an unusual, haunting new-age-esque score are incredibly effective too.

It’s a difficult film to give a star rating to, as I did find it heavy going and a bit gruelling, plus there’s a little too much philosophical chat to digest, particularly in one sitting. However, the film is filled with extraordinary visuals and is beautifully crafted. It’s strangely intoxicating too, aided by the tension created by the fear of the unknown. It’s enigmatic, so it’s difficult to fully understand what you’re watching at times, but the central ideas are close enough to the surface to toss around in your head whilst you watch. I believe the film is supposed to be an indictment of The Soviet Union at the time, but my knowledge of the country’s history and politics is weak, so that was lost on me. The central themes of faith and the meaning of life are pretty universal though so there was plenty still to ponder. As such, I would certainly recommend the film, but don’t expect an easy ride.

Stalker is out on 22nd August on Blu-Ray and DVD in the UK, released by Curzon Artificial Eye. I saw the DVD version and, I must say, I found the picture and sound quality a bit disappointing. Hopefully the Blu-Ray version is an improvement, as the standard definition release had frequent flecks on screen and a slightly hissy soundtrack. It kind of fit the drab, dirty vision of the film, but I doubt it was as intended.

These aren’t on the DVD version though, so I can’t comment on them.