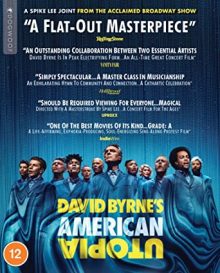 God, I miss gigs. As I write this, we’re in the middle of a global pandemic. Or maybe, to look at it more optimistically, we’re at the end of one… or it could just be just the beginning. In such uncertain times, we long for the comforts of a world we are already struggling to remember accurately. Gigs, for instance, seem like a holy grail to us music lovers and the temptation is to remember every single one we’ve been to as a positive experience. But the truth is we’ve all been to some disappointing gigs in our time. You’ve paid the money so you try to make the best of it, to stick it out to the bitter end. But only the lucky few have never experienced watching a band they love flounder on stage while hoping this is the last song, desperately holding onto that urgent piss while counter-productively quaffing the pint they bought even though they were full. And yet I feel I would enjoy even one of these nightmare evenings right now. I long for the time in years (months? decades?) to come when I can start hating such experiences again, rather than longing for their dank disappointments.

Of course, such miserable experiences are few and far between and most gigs I’ve been to over the years have been at least solidly enjoyable, many of them great. And then there are those certain evenings that turn out to be so indescribably joyous that you reel from them for days afterwards, treasuring the high-pitched ringing in your ears as a souvenir. These genuinely extraordinary gigs are perhaps as rare as the dreary ones but while the disappointments can be quickly and quietly filed away with life’s other let-downs, the transcendent experiences stay with you for a lifetime, rewriting your timeline, adjusting your future expectations and nourishing your music-loving heart. The job of a great concert film is to capture one of these experiences on film for all time. It’s no mean feat, considering that watching a gig on a screen can rarely, if ever, live up to actually being in the audience (though we’re grateful for all those live streams at the moment. Keep the music alive everyone!) and even if a filmmaker is lucky enough to be in attendance on one of those gloriously special nights, they have to be good enough at their job to make the whole thing come alive for audiences at home. Martin Scorsese did it with The Last Waltz. Jonathan Demme did it with Stop Making Sense. And now Spike Lee has done it with David Byrne’s American Utopia. 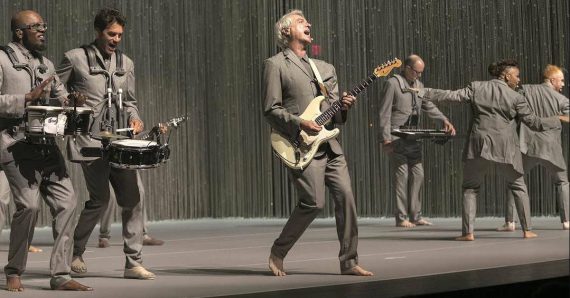 It’s no coincidence that two of the aforementioned films have a major player in common. David Byrne, former frontman of Talking Heads, is the perfect subject for the medium of the concert movie. Not only is he one of the greatest, most fascinating frontmen in musical history, but his precise, innovative and invigorating approach to the staging of his music in the live forum comes as close as you can get to that elusive formula for guaranteed satisfaction. In Stop Making Sense, the greatest concert film of all, Byrne’s concepts make the film come to life like narrative cinema, with a slowly growing number of people on stage, dramatic lighting, unexpected props and iconic costume changes. In American Utopia, Byrne takes a more stripped back approach, utilising a smaller space and a band who are all onstage for most of the performance, yet it is no less ambitious in its conception. No-one is rooted to the spot by drums or keyboards. The whole ensemble are constantly on their feet, always moving, instruments strapped on like front-facing proton packs. The musicians seem to have been chosen for both their musical prowess and their magnetic presences, the latter particularly evident in Tendayi Kuumba and Chris Giarmo, whose primary function is dancing. They move fluidly and with elegant synchronicity throughout, providing an arresting contrast with the angular shapes thrown by Byrne himself.

In many ways, Byrne has grown as a performer since Stop Making Sense. OK, so he probably still doesn’t fit into that suit, but a different kind of growth has taken place. While Stop Making Sense mostly consisted of an ongoing flow of music punctuated by a few shy asides, in American Utopia Byrne is more talkative but never tedious, explaining concepts, origins of ideas and personal political viewpoints engagingly and entertainingly. And yet he loses none of his distinctive personal charm. There is an immediate perversity, for instance, in opening the set with the closing track of his latest album, also called American Utopia. That record, his first completely solo album in fourteen years, is a perfect jumping-off point for this project, recalling as it does the upbeat rhythms, obtuse lyrics and paradoxical accessibility of the Talking Heads songs that brought Byrne to prominence in the first place. In particular, the single ‘Everybody’s Coming to my House’ goes for the same skewed party atmosphere as Talking Heads classic ‘Burning Down the House’, albeit with an incongruous sense of anxiety acknowledged by Byrne in his introduction to the song. And if ‘Everyday is a Miracle’ perhaps pushes the quirkiness to the extreme with lyrics about chickens, elephants and donkey dicks, no-one told the rousing chorus that this probably wasn’t a classic track in the making. 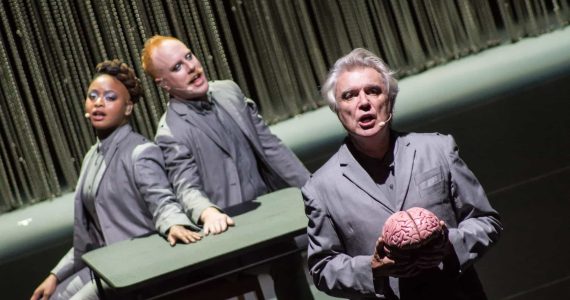 Half of the American Utopia album is accounted for here (and I highly recommend seeking out the other half for yourself), as well as a sprinkling of tracks from Byrne’s other solo albums, but Byrne has always been a performer who recognises the value of entertainment and giving an audience what they want, and so the hits keep coming throughout the set. When I say “hits”, by this audiences’ reckoning (and I include myself in that), a hit includes any track at all by Talking Heads. Byrne starts trotting them out almost immediately and the audience reaction to the first one, Talking Heads ‘77’s nerdily harmonious ‘Don’t Worry About the Government’, confirms their devoted allegiance. In some cases the bar has been set too high by previous performances for the new ones to clear. It’s always a welcome experience to hear one of my favourite Talking Heads song, ‘Naive Melody (This Must Be the Place)’, but American Utopia’s version, though still excellent, can’t quite match up to Stop Making Sense’s image of Byrne crooning it to a lamp. But other classic tracks such as ‘Slippery People’ and ‘Blind’ really come alive here through the dedicated, joyous performances and mesmerising choreography. And ‘I Zimbra’ has never sounded better, all driving percussion and forceful chanting.

It’s clear that when the actual proper hits arrive they need to be something special and that has been fully accounted for. Not every one of Talking Heads’ biggest songs is here. The mordant black humour of ‘Psycho Killer’ would have clashed awkwardly with the joyous atmosphere of the performance but its hard to imagine more broadly appealing pop gems like ‘And She Was’ and ‘Wild, Wild Life’ having worked here either. But of course ‘Burning Down the House’ is in place and there can’t have been a single person, in the venue or at home, who wasn’t certain that ‘Once in a Lifetime’ was going to arrive at some point. It does, and surprisingly early on, in a brilliant interpretation that recalls some of the iconic shape-throwing of the original video. ‘Road to Nowhere’, meanwhile, is saved for a triumphant finale in which Bryne and the band march off the stage and through the audience. These are the sort of reliably show-stopping moments that act as more than mere scaffolding. The energy they ignite does not die down as lesser-known songs emerge and this audience is ravenous for anything they are offered. It’s the complete opposite of those disappointing gigs we’ve started to forget exist. This is the sort of performance in which you hope against hope that the next song will not be the last. So it’s hard to imagine anyone but the grossest dullard sticking in a copy of American Utopia and just skipping to the Talking Heads material. And there is much to be missed by those who would commit such a sin. There’s a great rendition of the number 1 hit ‘Lazy’, the collaboration Byrne recorded with X-Press 2, and an irresistibly frenetic jaunt through ‘Toe Jam’, his collaboration with Norman Cook and Dizzee Rascal (neither of whom is present, or indeed needed). And there’s a powerful cover of Janelle Monae’s ‘Hell You Talmbout’, in which the names of African Americans murdered by law enforcement officers are called out and hollered back by the audience. Byrne acknowledges the potentially-problematic nature of an old white man performing this song but Monae’s response to his request, that the song is for everyone, typifies the inclusivity of American Utopia’s aims. 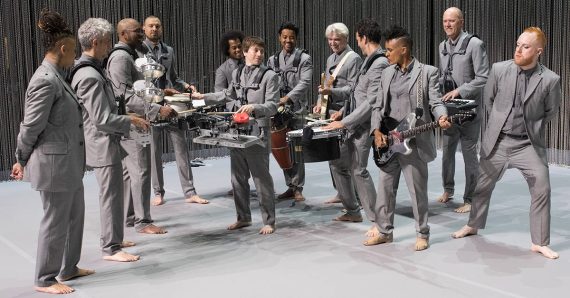 The latter performance was no doubt particularly close to director Spike Lee’s heart but it is not the primary reason for his involvement. Lee is a multi-faceted talent and the diversity of tones and styles evident in his narrative films alone mark him out as an endlessly interesting director. Like Scorsese and Demme however, Lee also has an impressive selection of films in mediums that are too often pushed aside. It’s mind-boggling how many great documentaries are consigned to subsections by online cataloguers with a penchant for narrative cinema, and concert films often get caught up in this narrow-minded miscategorisation. But Lee demonstrates his keen directorial instincts as brilliantly as ever in American Utopia, shooting the busy stage from many angles (including Busby Berkeley-like overhead shots) and managing to capture the performance in a way that emphasises its physicality and makes it infectious. A good concert film makes you wish you were there. A great one makes you feel as if you were. American Utopia has the power, energy, wit and unifying passion to drive audiences to their feet and have them dancing in cinema aisles, like they once did for Stop Making Sense all those years ago. Same as it ever was. It’s exactly the film we all need after the year we’ve had. There be no holding in of piss during this encore. Who needs that crutch of a stomach full of alcohol when you’ve got a heart full of joy.

David Byrne’s American Utopia is released on Digital Download on 14 December 2020 and on DVD and Blu-ray on Dogwoof on 11 January 2021.