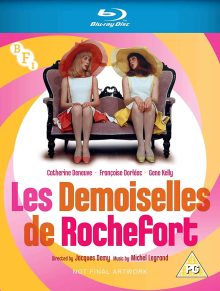 The BFI are currently running a special film musicals season across the UK. In their words: “BFI Musicals! The Greatest Show On Screen celebrates the joyful, emotional, shared experience of watching film musicals; with the biggest stars, the most iconic scenes and the best-loved song and dance numbers back on the big screen. Running 14 Oct 2019 – Jan 2020, it incorporates a season at BFI Southbank, BFI UK-wide re-releases of classic musicals, hundreds of screenings and events at venues across the UK, DVD/Blu-ray releases and films to watch on BFI Player.” Flix in the Stix, the touring cinema service I run, are putting on some special screenings of Grease as part of this, alongside live music performances (sorry for the shameless plug!), but I thought I’d also get involved by reviewing a couple of the new Blu-ray releases. I covered Milos Forman’s Hair a couple of weeks ago and now I’m going to look at Jacques Demy’s Les Demoiselles de Rochefort (a.k.a. The Young Girls of Rochefort).

The film concerns the longing for love shared by a group of people all convening around the seaside town of Rochefort. Most notably we have the titular twins Delphine and Solange, who are played by real-life sisters Catherine Deneuve and Françoise Dorléac (the latter of which tragically died before the film was released). They’re both fed up of life in Rochefort and plan to move to Paris to meet their perfect man and start a new life there. Maxence, a sailor/artist stationed in the town longs to meet his ‘ideal woman’ too and has already painted her from his imagination. The painting bears a striking resemblance to Delphine but neither are aware of each other, even though her mother (Danielle Darrieux) regularly serves Maxence at her cafe. Several other ‘ideal’ couples who are yet to meet are presented to the audience as the story goes on and the film teases us as we long for them to meet before the credits roll. 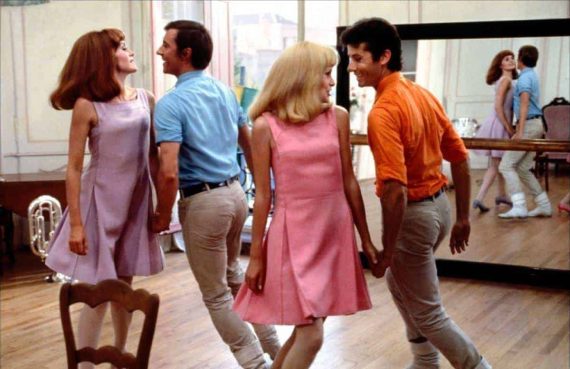 Indeed, although the film is very light and fluffy in essence, it does a great job of keeping you thoroughly engaged through bringing the several couples tantalisingly close together throughout. The audience is always kept one step ahead of the characters, allowing for a reasonable amount of tension, and there’s a steady trickle of new pairings introduced as it goes on too. This large cast of characters, each with their own stories, allows for a film that brims with life.

What really hooks you in though is the style. Demy’s previous film, Les Parapluies de Cherbourg (The Umbrellas of Cherbourg, 1964), was also a musical and a box office success, even faring well overseas. Due to this, he was offered quite a large budget (for a French film at least) to direct his follow up, even shooting an English language version at the same time (doing extra takes to accommodate). Demy made the most of this by really going to town on the colour-co-ordinated production design and expensive camera rigs, whilst still shooting on real locations to give the film a hint of naturalism among the fantastical visuals. 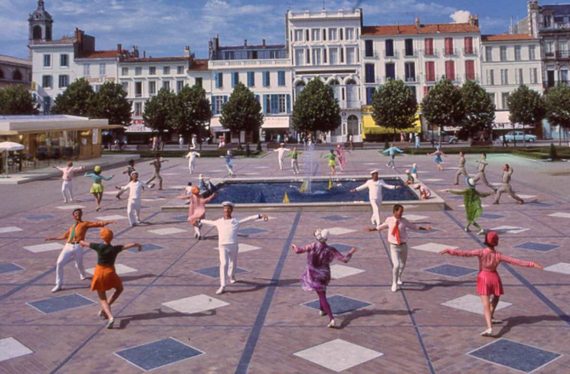 This extra effort pays off in spades too. It puts many Hollywood musicals to shame with the bold, bright colours of its costumes and set-dressings. The camerawork is wonderful too, with a lot of hugely impressive long-takes on display, often using cranes in a style indebted to Max Ophüls. As such, the film is an absolute visual treat from start to finish.

The music is fantastic too, with the great Michel Legrand providing the score alongside Demy’s lyrics. The orchestration is as rich and lively as the cinematography and contains a nice mix of jazzy numbers, ballads and classically-inspired passages. The music nicely interweaves the characters too, sharing tunes and motifs between those we long to see together or who have other connections.

At the time of release, some criticised the dancing (choreographed by Norman Maen) for not matching up to the Hollywood musicals the film is paying tribute to, but I thought it was full of life and had an infectious quality to it. I also loved how the background extras are choreographed in most shots too, not always in spectacular fashion but aiding the magical music-infused world being created. The great Gene Kelly plays a ‘middle-sized’ role too and choreographed his own sequences, which are the standouts in terms of dancing. He’s as light on his feet and mesmerising as always. He was asked to choreograph the whole film but unfortunately didn’t have time. 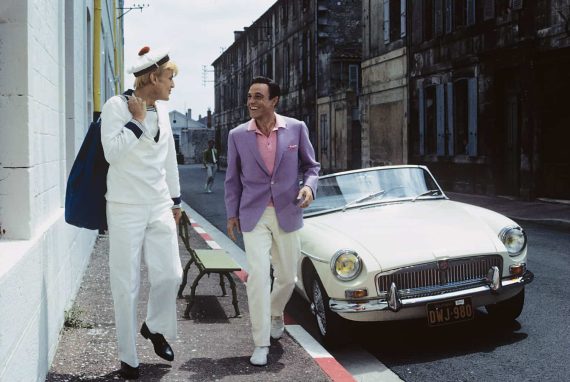 Overall, Les Demoiselles de Rochefort is a joyous, unashamedly romantic Gallic ode to the Technicolour Hollywood musical and a cinematic marvel. It’s an absolute pleasure to watch from start to finish and made me desperate to hunt down Umbrellas of Cherbourg, which I must admit I’ve never seen.

Les Demoiselles de Rochefort is out now on Blu-Ray in the UK, released by the BFI. The transfer is stunning. The colours look gorgeous in high def and the picture is clean and clear. The audio comes through beautifully too, with an option of a 5.1 mix as well as stereo.

There are also some great extra features included on the disc:

It’s a wonderful collection of material. Agnès Varda’s documentary is the standout. It’s made up of a nice mix of quite intimate footage she shot at the time (she was married to Demy so got great access) as well as interviews and footage from the film’s 25th anniversary. A great deal of the interviews are with locals who acted as extras or were involved in other minor ways, not just your usual star back-slapping. This allows for a glimpse into how the film’s production changed the local area that hadn’t experienced anything like it before.

The three feature-length Guardian interviews/lectures, which run over the film like commentaries, are excellent too, providing in-depth conversations with Demy, Legrand and Kelly. They’re not exclusively about Rochefort but each contributor’s career is strong enough to make for fascinating listening nevertheless. The Deneuve interview is only short but has enough substance to feel worthwhile.

David Jenkins’ commentary and Geoff Andrew’s audiovisual essay are also both very good, providing analysis and potted histories of the making of the film.

Overall then, a very strong package that comes highly recommended.