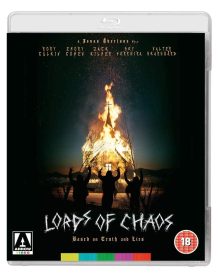 Back in the mid-eighties a teenage Oystien Aarseth (aka Euronymous) formed a new heavy metal band called Mayhem. Like a fair number of his friends Oystien was a fan of the satanic variety of metal played by the likes of Venom and Bathory. This kind of heavy metal music became known as Black Metal. Mayhem quickly became the first Norwegian Black Metal band when they released their 1984 demo Pure Fucking Armageddon. The story that Lords of Chaos tries to tell is what happened when a small group of metal-heads started taking their image and so-called ‘evil music’ a bit too seriously, resulting in things getting, err, very out of hand!

Euronymous (played here brilliantly by Rory Culkin), wanting to escape his boring, middle-class life, brings together the band Mayhem, including lead singer Dead (Jack Kilmer), who likes nothing better than examining road-kill and slashing his wrists, as you do! Sadly, just as the band appears to be getting somewhere Dead kills himself by slashing his wrists, and throat, then taking a shotgun to his head, all with predictably messy results. One has to morbidly admire Dead’s thoroughness though!

Wanting to preserve his own brand of ‘pure’ Black Metal, Euronymous opens up a small record shop in Oslo, named Helvete (Norwegian for Hell). Not only does the teenager do that, he also sets up his own record label to help similar music acts he admires. Along comes Christian ‘Varg’ Vikernes who infiltrates the band after blowing Oystien away with a weird demo piece, and then precedes to play a dangerous game of ‘who can be most evil’ one-up-man-ship, beginning with various church burnings and culminating in pre-meditated murder.

Akerlund’s film begins with the disclaimer: “Based on truth, lies and what actually happened” for a good reason, in that there was so much disinformation published in the wake of the strange goings on in Norway, revolving around the Black Metal music scene, that it must have been hard for Akerland to work out what really happened despite him doing copious amounts of research for a number of years. 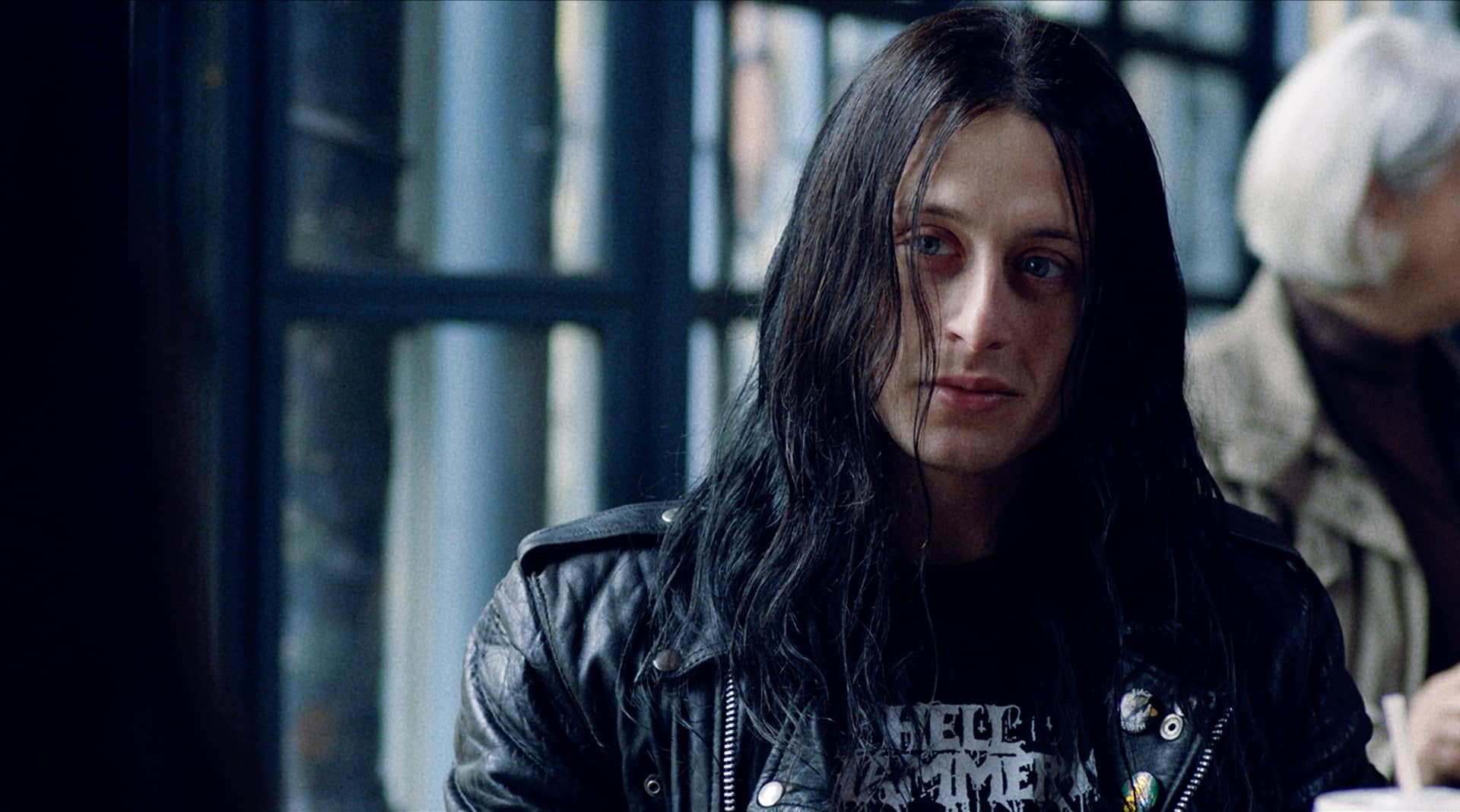 I’m not going to go into any more details regarding the story itself since if you don’t know what happened it is best that I say nothing more so you can come at it with fresh eyes. And, for those who think they know what happened, then you may have to think again after seeing Lords of Chaos, which was named after the book of the same name.

Lords of Chaos isn’t really a film about Black Metal per se, but more about male ego, competitive natures getting out-of-hand, and obsessive mental disorders. All the performances are good, but the three leads must take a deeper bow since they are all quite amazing. Director Akerlund also captures the feel of living through the 80s metal music scene (I know, I was there), both its ugly side, and its fun and funny side. And, despite featuring some of the most shocking murder sequences I’ve ever seen in a film, Lords of Chaos still manages to provide us with some lighter and often quite hilarious scenes, probably the funniest of which being when two of the key characters are interviewed by separate journalists for very different reasons. All I can say is that Spinal Tap has nothing on these guys!

Even if you’re not a fan of extreme heavy metal (and I count myself as one of those people) there’s still much to be appreciated from watching this well-made dramatization of real-life events that are still shocking to this very day. 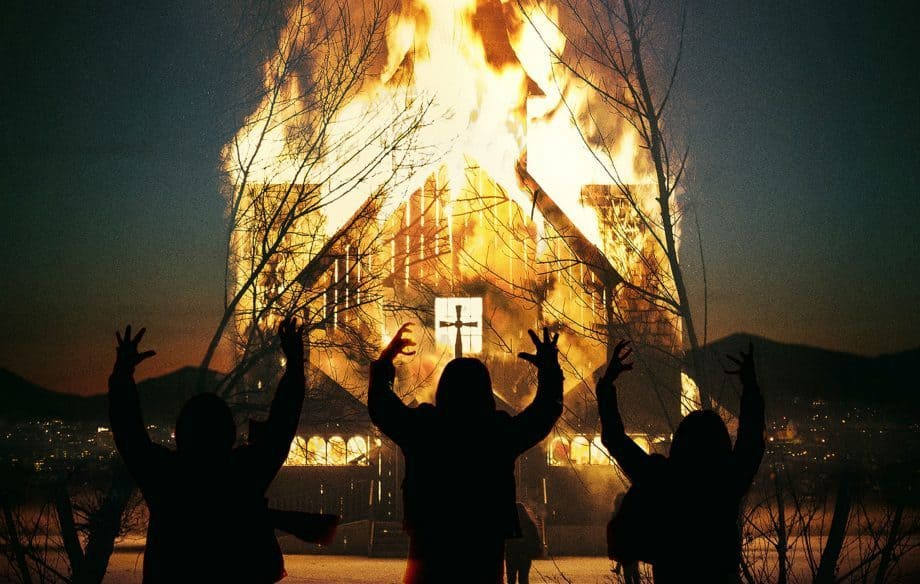 Arrow Video is distributing Lords of Chaos on Blu-Ray and on DVD. As with most of Arrow Video’s releases there are a plethora of extras to accompany the film. These include:

Blood Fire Death (22 mins) – an interview with writer and director Jonas Akerlund who talks about his history in the metal scene, his research into the case, and drops in a few interesting anecdotes regarding the making of the film. For example, parts of the model churches were built from left-over Blade Runner sets.

From the Dark Past (14.5 mins) – an interview with journalist and author Jason Arnopp, who plays himself in the film as an editor at Kerrang! magazine. He talks about how he first got into metal music by using the band Europe as a ‘gateway drug’ to the harder stuff! Talking of Europe, Jason explains that one of the band’s earlier tracks, ‘Seven Doors Hotel’ is actually a song about the Lucio Fulci film The Beyond… (https://www.youtube.com/watch?v=CP3W3QmCQeU)

Son of Satan (13 mins) – an interview with Arion Csihar, who plays his actual father, Attila Csihar in the film. He reveals that he’s first heard of the director through his Rammstein music videos, and that his dad never pushed him into music despite himself being metal ‘royalty’.

A Dangerous Meeting (11.5 secs) – an interview with Sam Coleman who plays Metalion in the film. He explains how he fell in love with Mayhem’s music during the shoot, despite previously being more of a jazz and pop kind of guy!

Carnage (13 mins) – an interview with special effects artist David Martin, who talks about his career up till now, and how he and his team achieved some of the grisly effects for the film. Apparently they used real pig’s heads in the film which caused some extras to heave their guts up…

Thurston Moore introduces Lord of Chaos at the Rio Cinema in London in 2018 (11 mins) – This starts out with some interesting back story to the film, but then Thurston starts reading out a lengthy passage of a related book by band member Necrobutcher and it becomes snooze time!

Outtakes (10 mins) – 15 expanded scenes. Worth a look, but one can see why they were dropped. There’s some goofing around too with props breaking.

Image gallery – 28 shots from the film including 3 posters

Original trailers & teasers – nearly ten minutes worth of promotional material, including some sequences that are not in the actual film, but are still kind of fun. 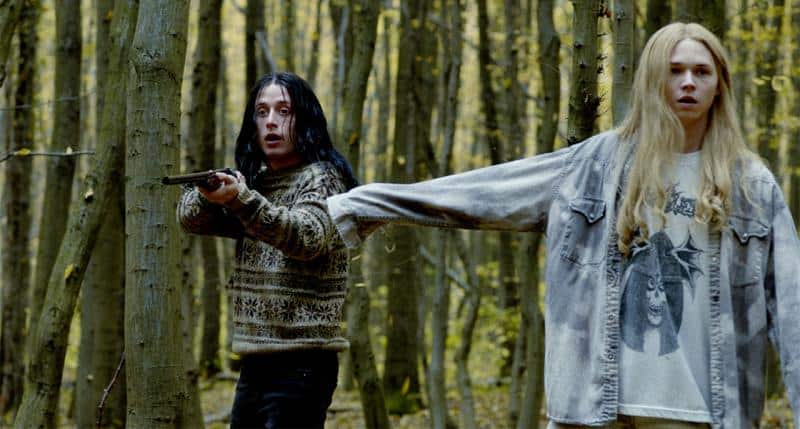