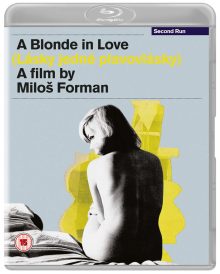 In his later years, Milos Forman was best known as a director of American Oscar-friendly prestige dramas with titles like One Flew Over a Cuckoo’s Nest and Amadeus to his name. However, his early work as one of the key figures of the Czech New Wave is rather different and by all accounts even better (Cuckoo’s Nest possibly withstanding – I adore that film). I’ve been slowly opening my eyes to his Czechoslovakian films over the past few years and Forman hasn’t let me down yet. Both The Firemen’s Ball and Black Peter left a big impression on me, so I jumped at the chance of reviewing the director’s second fiction feature film, A Blonde in Love (a.k.a. Lásky jedné plavovlásky or Loves of a Blonde) which is being released on Blu-Ray by Second Run.

The film focuses on the titular woman, Andula (Hana Brejchová), who begins the film showing off her engagement ring to a friend who lives with her in the women’s hostel in which she resides during her employment at a local factory. We eventually learn that Andula’s fiancé has briefly disappeared though without letting her know where he went and doesn’t seem as desirable as she first thought. She later meets the pianist Milda (Vladimír Pucholt), who she sneaks off with at a formal dance whilst a group of middle-aged soldiers vie for her attention and that of her friends. Milda is a little unusual but Andula falls for his quirky smooth-talking charms and the pair make love that evening. Soon after, Andula calls off her prior engagement, causing a scene at the hostel and those in charge hear of this and chide the women for their loose behaviour. Feeling frustrated, Andula heads to Milda’s house to presumably forge a ‘respectable’ relationship with him but he’s out, leaving her with his parents (Milada Jezková and Josef Sebánek) who are troubled by this late-night impromptu visit. Later, Milda returns and Andula gets a rude awakening about his character and intentions. 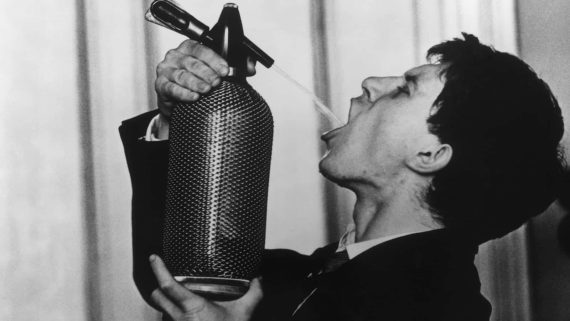 Like a lot of Czech New Wave films (Case For a Rookie Hangman certainly springs to mind, which I reviewed recently), A Blonde in Love revels in presenting awkward social situations and milking them for uncomfortable comedy and social commentary. In fact, in terms of plot, A Blonde in Love is very slight, with my synopsis above summing up the majority of scenes in the film. It spends much of its running time allowing a small handful of these sequences to play out slowly and organically as the awkwardness and mishaps build.

The key scenes that make up a good deal of the film are the dance where the couple meet and the final act at Milda’s house. These are both uproariously funny in the kind of squirm-inducing way series such as The Office and I’m Alan Partridge have operated in more recent years. Watching the middle-aged army reserves try to woo the group of teenage girls across the dancehall is a sheer joy to behold and Milda’s parents are two of the most wonderfully funny characters I’ve seen in a film for a long time.

This is not a simple bawdy farce though. Forman has crafted an excellent film from this seemingly slight and straight-forward comedy-drama. For one, he manages to elicit a fantastic naturalism from the performances and shoots in such a way that it often seems like a documentary. This is particularly evident in the dance sequences which feel awkwardly believable and feature charming asides in some of the seemingly accidentally captured glances and interactions between often uncredited side-players in the scene. Forman used a mixture of professional and non-professional actors, which created an effective blend. In an interview included on the disc, Forman makes a nice point about how the non-professionals had a great natural sense of their characters, whilst the professionals were much better with timing and other technical matters, so when working together they complemented each other perfectly. 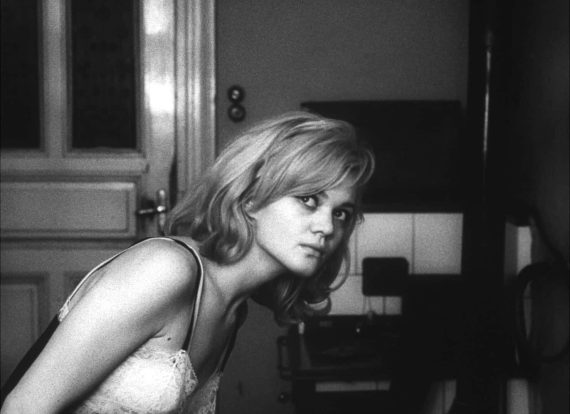 There’s more to the film than meets the eye too. The treatment of Andula can be seen as a sharp commentary on totalitarian control as well as an indictment of traditional values of ‘love’ and marriage as well as the lack of respect given to women in Czechoslovakia at the time. Although Andula falls a little too easily for these hopeless men, she doesn’t have much choice and most of the males surrounding her and her friends are forceful and manipulative. The ‘authorities’ around her also try to force all the girls into following procedure and meeting respectable men at the events they arrange, forging solid marriages so they can leave their work at the factory and become upstanding housewife citizens.

So A Blonde in Love has a lot to say under the surface whilst remaining wonderfully human and very funny, which make it a near-perfect film. It might not seem all that special at first glance, but give it time and watch carefully and you’ll realise it’s almost imperceptibly brilliant. Therefore it comes thoroughly and highly recommended.

A Blonde in Love is out now on Blu-Ray in the UK, released by Second Run (they released it on DVD back in 2011 too). I watched the Blu-Ray version and it looks and sounds fantastic.

– A Blonde in Love presented from a brand new 4K restoration of the film from original materials by the Czech National Film Archive.
- Life As It Is: Miloš Forman on his Czech films – Part 2: the second part of an archival film-by-film interview with Forman, newly edited for this release with never-before-seen footage.
– An original Projection Booth commentary recorded especially for this release with Mike White, Samm Deighan and Kevin Heffernan
– Deleted scene
– Trailer
- Booklet featuring an essay on the film by film historian Michael Brooke
– Region free Blu-ray (A/B/C)
– Original soundtrack in 2.0 Dual Mono 24-bit LPCM audio
– World premiere on Blu-ray

It’s not a huge number of features on paper but what is here is excellent and fairly substantial. Forman’s interview has plenty of fun anecdotes. A nice one talks about when he first met Vladimír Pucholt who was young and poor at the time and brought loads of explosives on the train to make firecrackers as gifts for the rest of the cast and crew. He talks about The Firemen’s Ball more than A Blonde in Love, but it’s still a fascinating look at his early years. There are some fascinating stories of his life around the time of the Prague Spring too.

The commentary is possibly the strongest feature though. The Projection Booth team do a fine job of deconstructing and analysing the film as well as discussing a little of the history behind the making of the film and methods used. The group have a wonderful rapport which means the analytical nature of their discussion remains enjoyable and never dry.

The deleted scene is interesting, showing a little more of Milda’s sneaky and unsavoury side earlier in the film. It makes their sexual encounter a little rapey though, so I think the film benefits from its removal.

Second Run’s booklets are always excellent too and this is no exception.

* Please note, the stills used in this review are not indicative of the picture quality of the Blu-ray.