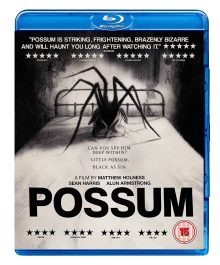 Possum is the debut feature film from Matthew Holness, best known as the co-creator and star of TV series Garth Marenghi’s Darkplace. It is a bleak and brooding oddity which delivers overbearing degrees of atmosphere, resisting the urge to resort to cliched scares or gore. The cast is mainly just two actors –Sean Harris as Philip, a disgraced children’s entertainer running away from some unknown scandal, and Alun Armstrong as Maurice, the grotesque stepfather whose presence looms large over the life of his stepson.

Philip, a deeply emotionally scarred individual, makes a return to the rundown remains of his childhood home, carrying a big, brown leather bag. However, he is haunted by the contents of the bag, a spider-bodied, human-headed monstrosity of a puppet he calls Possum. He tries many times to destroy Possum, but always finds himself back in possession of the hideous puppet. Back in his former home Philip rediscovers the book in which he created Possum’s dark backstory as a boy (very much resembling the pop-up book from The Babadook), and he confronts another spectre from his childhood, his stepfather Maurice.

Holness coaxes truly remarkable performances from his two leads. Sean Harris is perfectly cast as the nervy, psychologically damaged puppeteer – all broken and twisted posture with a haunting dead eye stare which eerily resembles Ian Curtis, the doomed lead singer of 70s post-punk band Joy Division (who Harris played for one of his earliest roles in 24 Hour Party People). The way that Harris interacts with the bag that contains Possum is incredible, making the bag and the puppet inside seem like a living and breathing co-star. 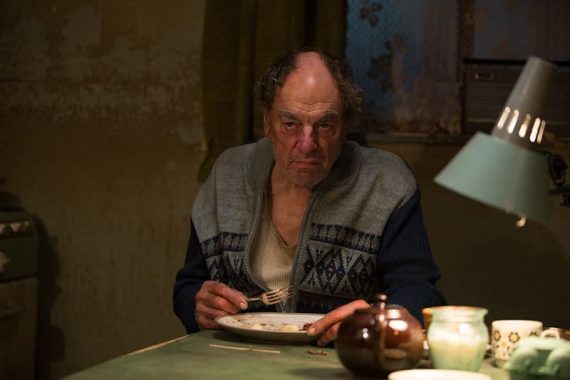 Alun Armstrong is appropriately seedy has Maurice, filthy clothes, greasy hair and smoking roll ups and all the time controlling Philip, as if he was a puppet himself. He spends his time in the squalid kitchen throwing contempt at Philip, gleefully reminding him of his traumatic childhood and offering him treats from his sweetie jar, which is far more sordid feeling than it should be.

As the film progressed, I started to question whether the film takes place entirely in Philip’s subconscious. Although he is a grown man, it seems as if we are in the 1970s – when Philip was a child and he witnessed the traumatic death of his parents in a house fire. It would also explain his inability to rid himself of Possum. Holness wisely refuses to give easy answers, so the viewer is able to create their own theories.

In true classic monster movie style, it takes time before we are introduced to Possum, although we do get small glimpses – when it’s finally revealed it does not disappoint. All long spider legs and eerie human head, it resembles one of the hideous toy hybrids that Sid creates in Toy Story. The work put into the design and construction of the puppet is phenomenal – so much so, that you begin to question whether it is an actual living creature. Over time you start to realise that the puppet’s face is modelled on Phillip’s, hinting that Possum is a darker part of his psyche.

Director of Photography, Kit Fraser, uses 35mm stock to give the film a faded 1970s look. The chosen colour palette is equally gloomy – black balloons, sooty illustrations, drab browns and putrid greens. The chosen East Anglian locations are wonderfully grim and post-apocalyptic. We are treated to disused railway lines, vast boggy marshes, crumbling bridges and rundown military buildings. Even the active railway station Philip arrives at is eerily empty and looks like it hasn’t been decorated in 50 years. 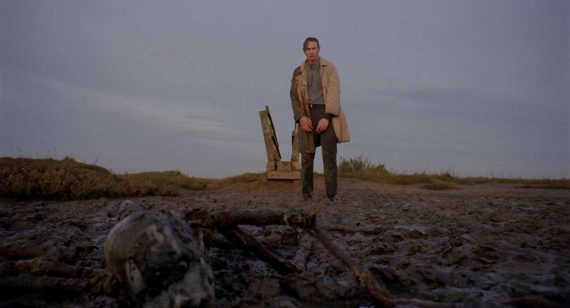 Complementing the visuals, is the deeply unsettling and mournful score by the BBC Radiophonic Workshop. I was unaware that they still existed and I’m glad that they are – the score perfectly pays tribute to the classic themes and motifs they created in 60s and 70s for many ground-breaking TV series.

Speaking of his vison for the film, Holness says, “For the film I chose to concentrate more fully on the story’s true ‘monster’, a real-life horror more frightening than any supernatural presence. My desire was to make a modern ‘silent’ horror, with little dialogue or connection with the outer world. This is, after all, a film about silence. Philip’s isolation and abandonment. His loneliness. His terror of speaking out”. Possum is a very cerebral horror film. It is a studied exploration of adult themes told through the medium of classic psychological horror. Matthew Holness’ debut is full of metaphor that goes beyond the horrifying and surreal images and stays with the viewer long after it ends.

Possum is released on Blu-ray and DVD by Bulldog Distribution and includes the following extras:
• Audio commentary with director Matthew Holness and cinematographer Kit Fraser
• Artwork Gallery by artist Joe Avery
• ‘A Gun For George’ 2011 short film by Matthew Holness