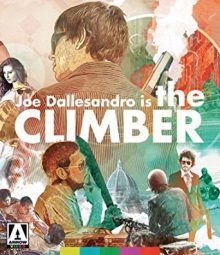 Superior slice of Italian crime that saw one time Andy Warhol collaborator, Joe Dallesandro, up sticks to Italy to try his hand at tough guy leading man status. And he gives it a good go in this tale of a two-bit criminal rising the ranks of the Italian crime world, muscling in on every piece of the crime action going, all the while plotting his revenge on another seedy gang boss who betrayed him some years earlier. A sort of precursor to De Palma’s genre defining Scarface (the two sharing a similar small time hood rising the ranks of crime and power plot) Pasquale Squitieri’s picture may be slightly dated but still hits hard and manages to squeeze in some artful touches along with all the swagger and shoot-em up action.

Ripe for re-discovery, The Climber may have a narrative that at first seems uninspired (having been re-hashed ad-infinitum over the years across countless other crime pictures) but give this slice of Italian cool a chance as it’s some gangster-ing good times. Nicely shot in real locations in and around Naples and Rome, the flick has that gritty 70s look which lends itself well to the crime trappings. Squitieri’s taut  direction (he made a series of these crime pictures throughout the 70s) conveys a real sense of Dallesandro’s hood having to claw his way to success, his initial plans to strike rich and powerful faltering and often setting him further back in his quest. Grubby violence erupts when things don’t go to plan and every character is pretty much unlikable, repellent or damaged in some way making the viewer dwell in the dark criminal underworld as much as the characters do.

However, Squitieri never glamorizes the criminal life but rather seems to have an understanding of it which gives the film its gritty edge. In fact, he still makes us care for the characters as Dallesandro has oodles of cool charisma and one feels his character is simply in this life as it’s all he knows. Not that it justifies his violent actions. Stefania Casini (Suspiria, 1900) also elevates the damaged gangster moll role above mere window dressing and shares good chemistry with Dallesandro (the two actually involved with one another at the time).  Come the second half, action and violence erupt at regular intervals and while the stunts are suitably dangerous and the fire-fights full of bloody squibs, Squitieri infuses these scenes with distinctive stylistic flourishes (the slow motion start to a motorcycle race, the one take bar fight with a group of American sailors) that will satisfy cinephiles beyond the simple carnage.

Not always an easy watch due to some startling violence and a pace that meanders rather than throttles through the life of a criminal, The Climber is nevertheless a worthy piece of Italian crime fiction that can stand side by side the recognised genre greats of the time such as High Crime or Live Like a Cop, Die Like a Man. It’s also a great introduction to the works of Pasquale Squitieri and the Italian era of Joe Dallesandro’s career. And it’s got a thumping soundtrack to boot.

The Climber is released in the UK on Blu-Ray on the 15th May 2017 from Arrow Films. As well being a brand new 4K restoration of the film, along with reversible cover art, the main extra is a fantastic  30 minute doc with star Joe Dallesandro talking about the making of the picture and his time making films in Italy. Good stuff.