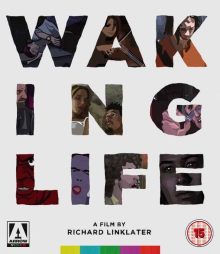 Released back in 2001, Waking Life saw indie darling Richard Linklater experiment with using cutting edge digital rotoscoping animation to bring his meandering, talk-heavy style of drama to new life. Rotoscoping (creating animation by tracing over film footage) had been used for years since the early days of animation, but this was the first time anyone had used digital rotoscoping to produce a full feature film. The software used was developed by Bob Sabiston, an animator and computer scientist veteran of the MIT Media Lab, who used it originally to make his award-winning short film “Snack and Drink”.

Waking Life follows an unnamed character (played by Wiley Wiggins) as he drifts through his shifting dreams. Along the way he meets a wide variety of characters who each give their differing theories and philosophies about life and consciousness. And that’s pretty much it. The film is largely just a series of monologues/lectures/discussions with our protagonist not really interacting with the speakers until the final third where the topics lean more heavily towards dreams and reality, and he asks them about his predicament of being trapped in this dream in such a lucid state.

On paper then, this is a film I should hate. I’ve talked in previous reviews about my distaste for films where characters spout philosophy and the experience becomes a lecture rather than an engaging narrative. I think I prefer philosophies to be explained visually or metaphorically (or maybe I’m just stupid), but I find it tedious to listen to an intellectual spouting theories at me. Roughly knowing what to expect from Waking Life before going in to it (this was my first watch), I was fully expecting to hate it, but I’m a big fan of some of Linklater’s work and I’m also a huge animation fan, so I thought I should give it a try. 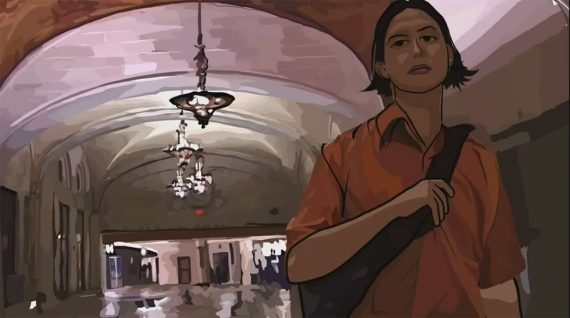 Well, I’m happy to say, something really drew me in to Waking Life. I’m not sure why, as my worst fears about the film’s content were technically true, but I found myself hypnotised by the experience. I think the style was a big help. A variety of animators were brought in to work on a scene or two each, giving the film an ever shifting look, tied together by the unusual rotoscoping technique making use of a consistent shooting style. Speaking of which, the film’s source material was shot handheld, very roughly on early digital video cameras, utilising natural light for the most part. Looking at the raw footage on the disc’s supplementary material reveals a pretty ropey looking film, but the final result after animation is stunning. Combining the handheld camera and lifelike animation aesthetic with a fairly rough and simplistic art style creates a bizarre yet beautiful look and feel. It looks like nothing else I’ve ever seen, so I found the film endlessly fascinating to look at. The music is excellent too and suits the dream state of the film perfectly.

The content of the scenes is often very interesting too. With such a barrage of varying ideas and theories, it can get overwhelming and some sections went over my head or didn’t engage me enough to keep me listening. However, if one doesn’t grab your interest, there’s always a totally new one around the corner and enough scenes got my brain whirring to make for an enjoyably mind-expanding experience. The final third in particular got very interesting as the film becomes more self-reflexive and the protagonist questions what is happening to him (some suggestions are that he is in fact dead and living in the final minutes of his brain activity after his body has stopped working).

Yes, it feels like the ultimate stoner film at times with its trippy style and endless philosophising, and, I won’t lie, I couldn’t always follow everything being said, but the film is wonderfully unique and endlessly fascinating, if only through its unusual visual style. I found it curiously spellbinding, which, coming from someone usually put off by such an aimlessly rambling think-piece, I think says a lot.

Waking Life is out now on dual format Blu-Ray and DVD in the UK, released by Arrow Video. I saw the Blu-Ray version and, as is to be expected from the label, the picture and audio quality is fantastic.

You get a tonne of special features. Here’s the full list:

The commentaries are very good and compliment each other nicely as the Linklater, Sabiston, Wiggins & Pallotta track talks more about the content and writing, whereas the animator one is more technical.

I haven’t had chance to properly watch all the shorts yet, but I skimmed through and you can see a similar interesting style in use, so fans of the film’s look will be interested in working through these.

The making of is disappointingly short, but the animation tutorial, although very simply presented in almost one long shot, is detailed and fascinating for anyone with experience in animation or film post-production. The pre-animation footage is interesting to see too, as you get an idea of the rough, low-tech early digital style they used as a reference for the animators.