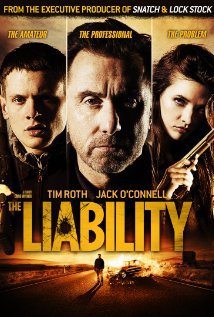 I didn’t quite know what to expect upon inserting the dvd into the player. The synopsis from Metrodome painted this as a serious gangster thriller, which really appealed to me; dark, gritty, very british and devoid of Hollywood glitz. However, something I’d glanced at online described it as a comical affair, so I was now thinking of another Snatch or Lock Stock perhaps?

Thankfully the team behind this haven’t just re-hashed either of those (excellent) cockney gangster comedies, but have instead created a sharp observation-based thriller about a young lad’s involvement in the shady underworld of the hired contract killer, at his corrupt stepfather’s behest, with a few darkly comical laughs thrown in.

Jack O’Connell is believable enough as Adam, the lazy layabout stepson who, after writing off his stepfather’s beloved car, is made to repay his debt by becoming a driver / assistant to Tim Roth’s aging hitman, Roy.

Stubbornly set in his ways and hardened by years of brutal killings, something about Adam’s youthful naivety and cheeky charm unlocks Roy’s inner self, and there’s some great interplay between the two characters as they learn more about each other during their road trip. The sullen, sexy Talulah Riley adds a bit of comic book sex appeal to proceedings as ‘The Girl’; her smouldering, smoking, impossibly slim, gangster chic form almost belonging in another movie, perhaps Sin City or Kill Bill? She would certainly be more suited being silhouetted against a brick wall covered in gore, while calmly putting her sword away and lighting up a cigarette.

In this movie her visual look doesn’t match her very one dimensional character, so she seems wasted. Adam’s mother may as well not feature in the movie at all, as hers is perhaps the most waste-of-screentime I’ve seen in years. Not only is she completely pushed into the background but serves no purpose at all – so feeble a character as to be non-existent.

The film itself does feature some great moments. Peter Mullan is suitably brutal as the stepfather; the scene in which Adam realises the extent of his dodgy business is pretty grim. Roy’s oddball eccentricity is wonderfully at odds with his otherwise very straight acting character; allowing himself a havana cigar while listening to a cassette of matching music on the way to each job.

The scenes are well shot, from the creepy, crystal clear woodland expanses to midnight roads over which smoking industrial chimneys tower, to the pre-showdown scene at the isolated pump room full of menacing valves, pistons and high gangways where we anticipate a gory torture sequence that doesn’t materialise.

The soundtrack verges from heavy rock to haunting cello pieces with a fluidity that marries up to the visuals nicely. I did find myself thinking that I haven’t seen anything quite like this before. Despite its relatively slow pace it does have a cool real-time feel and enough chemistry between Roy and Adam to hold things together. The ‘hits’ themselves are different to the usual stealth-like sniper-action more common in this sort of movie, and the frequency with which Roy pulls out his gun on everyone and anyone in a couple of scenes is directly at odds with our perception of the slick unseen hit man he’s supposed to portray.

Unfortunately, towards the end it start to feel rushed and the eventual climax leaves unanswered questions, or at least a craving for more detail. Roy is a trained killer, so why does he fail to kill Adam? Roy’s hit and run at the hands of Talulah’s character is ludicrous; the impact of the car would be immense and certainly bring about death, if not at least several broken limbs. Why don’t we see the stepfather’s lock-up after the first scenes of the movie? Is the girl’s sister actually dead? Does she seem to care or is she just too cool? Where does she go in the pump room scene?

My overall verdict is that The Liability is worth a watch and there are some great moments, especially the interplay between the two main characters. BUT, right at the point Roy tries to kill Adam it feels like another director has taken over. (It’s a real real shame because it’s also at this point that it feels it could start to get really good!). There is a high irritation factor when, once we find out that the Dad has kidnapped the girl’s sister as part of his sex trafficking ring, it then takes an age for this to really come out in the story, and even then it’s not dealt with properly! Who wants to see Peter gunned down on his lavish drive far too easily with a few quick shots, when a gruesome showdown in his sex torture dungeon would have made us feel he’d had his just desserts!