Jim Whalley has written his thoughts below on Date Night, which Dazz Camponi reviewed previously. 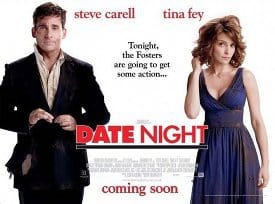 Is Shawn Levy a human being? Yes, he has a number of usually human features like fingers and a face. But consider for a moment an all too plausible alternative: that he may, in fact, be some new kind of deadly insect. An insect that feeds on comic talent and shits out money. Using admittedly amusing concepts as bait, Levyfly quickly cocoons its prey in oversized, special-effects-filled products from which no good can possibly escape. Once ensnared, comedians are sedated by the promise of box office riches, quickly becoming listless and receptive to Levyfly’s inane creative suggestions. Recovery can take years. Some never recover at all.

Following in the doomed footsteps of Steve Martin (The Pink Panther) and Ben Stiller (Night at the Museum) are the current stars of NBC’s Thursday night schedule, Steve Carell and Tina Fey, with Date Night. The teaming of Carell and Fey, both gifted, creative comics with a knack for capturing middle-class frustrations, should be a cause for celebration, but it is pretty much the film’s only achievement. Having united them, Levyfly then squanders their combined abilities with alarming proficiency. This is all the more upsetting because Carell and Fay’s television commitments limit their availability for film. Fay in particular is a rare big-screen presence who must be kicking herself for so utterly wasting her time away from writing, producing, and staring in 30 Rock. 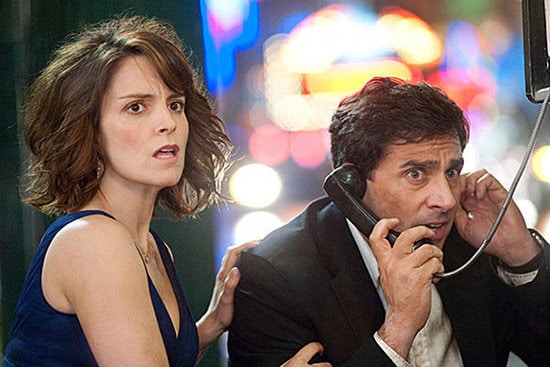 The first problem is the plot, of which there is far too much. Carell and Fey play the Fosters, a suburban couple panicking about the toll of careers and kids on their marriage. To perk things up they venture into New York, steal someone else’s table reservation at a fashionable restaurant, and are accidentally mistaken for blackmailers. The blackmail involves bent cops and the mob and takes absolutely ages to explain. More importantly, it isn’t funny. Carell and Fey try to inject some life into the pages and pages of exposition they’re forced to recite, but this usually just results in them shouting at one another.

Other stars in cameo roles fare no better. Mark Ruffalo and Kristen Wiig are given nothing to do as another couple whose marital problems start the Fosters’ worrying. Mark Whalberg plays a muscled security expert requiring all the range of his old underwear ads. Perhaps the best evidence of Date Night’s artistic anaemia is the choice of actor to play the mob boss: Ray Liotta. Ray Liotta? Who (or what) other than Levyfly would have the imagination to stray that far from type? Only James Franco and Mila Kunis manage anything interesting. As the real blackmailers they get to act out love so passionate that they each have a big tattoo of the other’s face.

Apart from them, the other reason to see Date Night is for a masterclass on how not to shoot in New York on a budget. Shutting down Manhattan streets is expensive and difficult. But if you elect not to, try to avoid using takes where passersby can actually be seen stopping to take pictures of your stars. Similarly, if you’ve only got one road on which to stage a lengthy car chase, don’t keep using the same camera positions interspersed with hundreds of shots of people screaming. Levyfly is happy doing both these things. It must be squashed at the first possible opportunity.