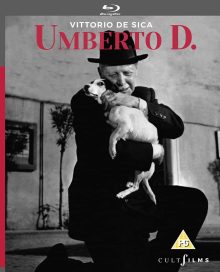 Umberto D. begins and ends with a long shot. First, of a column of protesters marching towards us – and then of an old man as he walks away, kicking a pine cone for his dog to chase.

What’s shown between is an unflattering close-up of post-war Italy.

No better way to expose the ‘dog-eat-dog’ nature of that society than by twisting the lens in on the fate of a single animal: Umberto D. Ferrarri.

Umberto, played by the non-professional actor Carlo Battisti, has been a public servant for more than 30 years.

He joins a protest demanding a modest increase in the state pension. But this single act of defiance sees him literally driven away, tail between legs.

His inner life is then stripped bare – just like the room he has lodged in for 20 years, before he is finally unhoused.

His estrangement passes slowly from the literal to the symbolic – for, as the poet put it, “humankind cannot bear very much reality”. 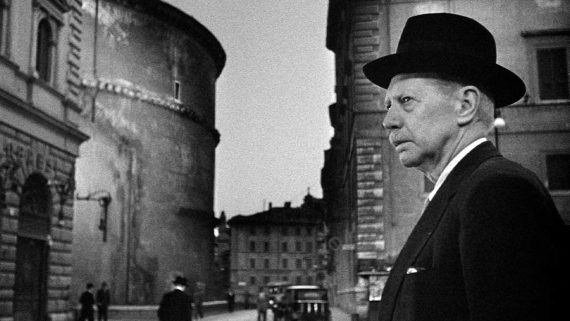 With no one to help, he is left to wander the streets like a dog. His own dog, Flike, had earlier wound up in the municipal compound, where each day counts down to state-sponsored oblivion.

And this is where we are struck by the forked lightning that we find in the stories of Heinrich von Kleist or the films of David Lynch.

For Flike is an emanation of Umberto. Loyal and obedient, playful and friendly – yet treated by society as the lowest thing that needs casting out or ‘bringing in’ as soon as it starts to beg, or bite.

By protecting the weak pulse of boundless love against the slow process of brutalisation, each is able to rescue the other from certain death.

The pine cone they kick and chase with rediscovered relish at the end is an ancient Roman symbol of regeneration.

After all of the dying back in harsh conditions, something suddenly stirs again, as the old pair gambol together in what I want to call winter light.

Umberto D. was reissued by CultFilms on Blu-ray on April 24th, 2017.
Special Features Include: