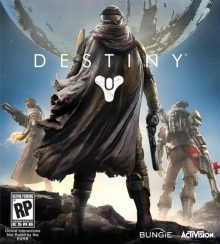 Billed as the most expensive game in history, it’s time to see what Bungie did next.

Go and tell your mum, gran, aunt, whoever, that games aren’t just for spotty kids in their bedroom, no they’re big business. Well that’s what we keep being told. In the same way that a film is ‘good’ because it made a pile of cash, so it seems that games are now in that realm. Don’t kid yourself that a game’s success is gauged on its quality, no siree it’s all about the money. Show me the money, as someone probably once said.

That’s where Destiny comes in, it took five years and more money than many nations have, to make. Will it make this money back? Yes of course it will. Does that mean that it is worth it? Don’t be silly that’s not what it’s about.

Destiny is made by Bungie, the people behind Halo, and published by Activision, the people who bring you the annual Call of Duty shooting fest, so it won’t fail. Now this may all sound rather negative and that I have an axe that’s got a bit blunt, well to be honest I have got a bit disillusioned with the so-called AAA games and want something a bit more to help relieve me of my hard earned cash and my limited gaming time.

Bear we me, if you haven’t gone somewhere else already. Destiny is a futuristic FPS (stick with what you know eh Bungie) partly set on Earth. You won’t be at all surprised to hear that this future Earth is ruins (aren’t they always?) because future humans shacked up with a big orb thing called the Traveller who helped them live longer and colonise our planetary cousins and have lovely, jolly, golden time. 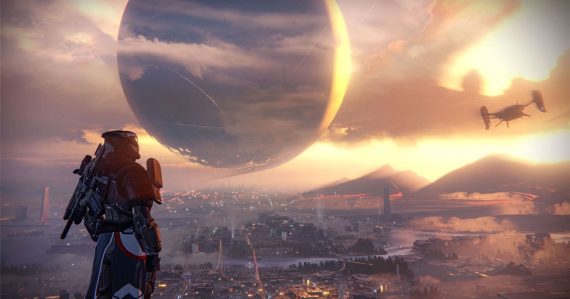 However, the Traveller has been around a bit you see and over its time in space it managed to make an enemy called The Darkness. As far as I can tell this isn’t the same Darkness who screeched about a believing in a thing called love, no this one is really dangerous. Therefore, cut to now and things are not looking at all rosey for our poor descendants.

This is where you come in (of course) to fight against The Darkness and some rather COVENANT (Halo baddies) looking nasties called The Fallen (is that a band too?)

Now I’m sure you’re thinking the same as me, this is all a little familiar to well just about every other futuristic shooter, so what’s new? Well the gameplay is as slick as you would expect from Bungie, there are tons of weapons and everything looks beautiful. The water looks very realistic, as do the clouds and the sunsets. Really, I felt like getting out my easel and doing a quick watercolour they looked so nice. OK so I made that bit up, but you get my drift.

What’s new with Destiny is that you are always online. You can’t play it if you’re not. This is because every mission can be played co-operatively. In the really hard ones, I think, co-op should be mandatory! On top of this, as you wander around what looks like a single player mission you will see other people doing exactly the same as you. They too will be going from game checkpoint to checkpoint doing the same things as you.

This new mechanic can be helpful if you both need to get through a clutch of nasties, but at other times a bit weird. In one of the early missions I swear I had to queue up to scan the same transmitter as two other players who were doing the same mission as me.

Then, as you roam the wilderness around you, it does ruin the atmos somewhat when you see some fool basically jumping up and down as though they have a lobster clamped on to their groin and they’re trying to shift it. Why do so many gamers seem to think jumping around like a madman on a pogo stick will make other players want play with them? It’s as if they have just found the jump key and just can’t stop themselves from pressing it! ‘I can jump, look at me, weeeee!’

And for all the millions that were spent on the game it still falls into some lame game traps that I would have thought all that money would have helped them to avoid.

The first is: beast with slavering jaws, pincer sharp arms and clearly rabid rage runs at you so that you shoot it. It dies and is replaced by the bullets you needed for your sniper rifle. Handy I agree, but it’s as if they’re some sort of irate delivery person. Not exactly the sort of realism I was hoping for. 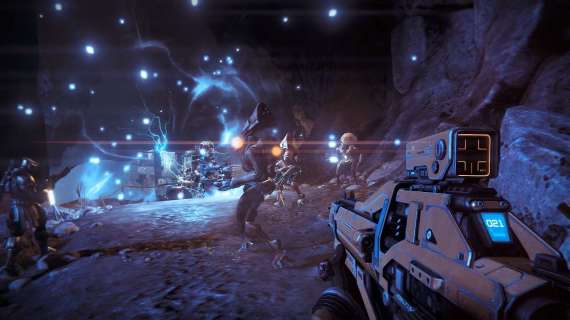 Another issue is when you are using your helpful sidekick, Ghost (a floating mechanical eye with R2-D2 style technology skills), is scanning some old Russian tech. He says it going to take a while, cue increasingly difficult waves of various nasties. When will Ghost, voiced by, Peter Tyrion Lannister Dinklage, be done? When you’ve killed all the baddies of course! Any chance you could finish any quicker? Nope. Oh.

Being made by Bungie you do have regenerative health, the company thought of it for Halo. And in most cases when you die you respawn a few seconds after your death and don’t miss much. However, there are places where this otherwise reliable respawn technology doesn’t seem to work very well. Poor signal probably. What this means is that if you die there, mid-section, you have to go all the way back to the start again! See what they did there?

So you’ve died countless times and you need a break, well Bungie clearly thinks that such people are whimps because the game doesn’t have a pause function. Pop to the loo or make yourself a drink and you’ll come back to find yourself dead, nearly dead or at least under attack of some kind.

On the whole I was disappointed that Bungie didn’t do more with its follow up project to Halo. It was always going to be a success, so why not try something a bit different? So much of Destiny just looks too similar to the Halos from character models, baddies, weapons and so on. I kept on expecting to see not only Grunts, Elites etc but also MC himself walk onscreen and say hi!

In order for gaming to progress, I think, that studios really need to start to at least try to do something different if games are truly going to be a big part of society and not just the domain of those who love nothing better that shooting aliens and pwning others online.