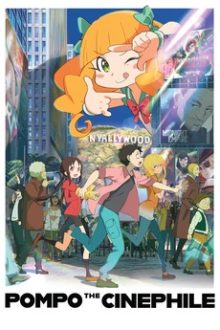 As both an animation enthusiast and a cinephile myself, Pompo the Cinephile sounded like it would be right up my street. The tale of a seemingly perpetually-pre-pubescent movie mogul who turns to a promising novice to direct her pet-project screenplay, Pompo the Cinephile is clearly a film made by people with a great passion for the craft of filmmaking. I would attribute this mainly to writer/director Takayuki Hirao but, as this film is at great pains to continually remind us, films are a collaborative process made by many people. Pompo the Cinephile is also an adaptation of a Manga by Shogo Sugitani which I haven’t read, so I have no idea whether the director “found himself in the film” as the director in this film is encouraged to do. Given its earnest sincerity and undeniable passion, I’d say he did.

Unfortunately, as is often the case in the more overwrought variety of anime, Pompo the Cinephile’s passion is also its downfall. There’s a determination to inspire and move here that is so apparent as to destroy any chance of that happening naturally. What’s more, while Pompo the Cinephile’s obvious dedication to the creative process could prove infectious, it is scuppered by some of the dunderheaded pronouncements it makes. In particular, there is a declaration that only pained outsiders can make worthwhile art, against which there is no pushback. It’s the sort of half-baked hokum you believe with all your heart when you’re in sixth form. Believe me, I haven’t grown cynical in middle age! I still hold onto many of the romantic ideals of my youth. But this viewpoint seems particularly narcissistic, a mantra made for outsiders to rebrand themselves as chosen ones. 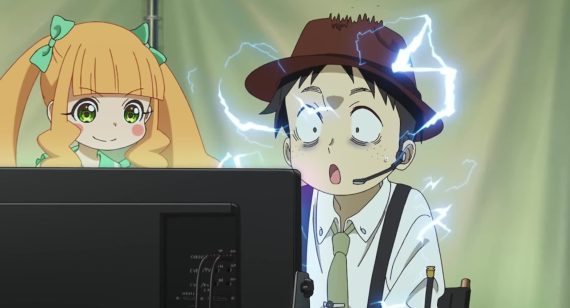 It’s a shame Pompo the Cinephile gets so bogged down in pseudo-philosophical claptrap because its admittedly simplified depiction of the creative process can be infectious. Scenes of Gene the director learning his craft, putting his stamp on the film with inspired decisions but also listening to the input of his crew to work up new scenes on the fly, are appealingly joyous and seeing Gene tackle the editing process is a welcome acknowledgement of this crucial part of filmmaking, that the editing studio is where you “find the film.” But again, Pompo the Cinephile shoots itself in the foot as Gene lets the process obsess him, to the detriment of his health, ultimately discharging himself from hospital in order to finish the editing. This plays into a dangerous notion that such reckless disregard for your own well-being is somehow heroic, a necessary sacrifice for your art. And in the meantime, Gene talks about how letting someone else edit his film would mean it was no longer “his”. What happened to film being a collaborative process? Isn’t this insulting to all the amazing editors who get so little credit anyway? By this stage, Pompo the Cinephile doesn’t seem to know quite what philosophy it’s espousing anymore.

There’s a subplot in Pompo the Cinephile involving a young banker who has fallen into his role through family ties but no longer sees his ill-fitting career as a symbol of success. On the cusp of quitting, he suddenly realises he can use his position to help finance Gene’s struggling film. The scene in which he attempts to convince a boardroom of suits to back him is the moment I fully lost patience with Pompo the Cinephile. It contains an utterly ludicrous twist and endless teary-eyed shots of the passionate young man struggling against the big money people. It’s just too dumbed-down to truly inspire or move. 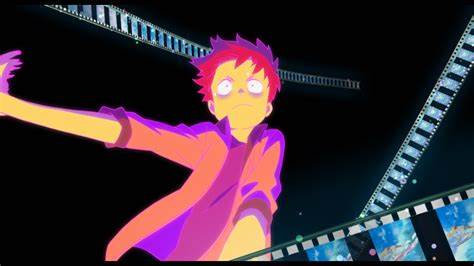 Pompo the Cinephile’s animation has been celebrated as beautiful by many critics but I think they’re largely talking about the artwork. The designs are often striking but the animation itself is minimal and the characters inexpressive. Pompo herself, whom the film wisely uses sparingly while never undermining her rightful place as the true lead character, is the only creation here who really comes to life. Director Gene is an intense bore, his face frozen in a dark eyed death mask so we never forget that he has that misery that apparently all creatives need to be any good. Rising star Nathalie is that stereotypical wide-eyed (in both senses) Anime girl who has no character beyond her niceness, nervousness and tentatively fetishised cuteness. The boldly drawn Martin Braddock, an ageing star who wants to connect with every woman on social media, is good for a few laughs but Pompo the Cinephile only really comes to life when its titular heroine is on screen. 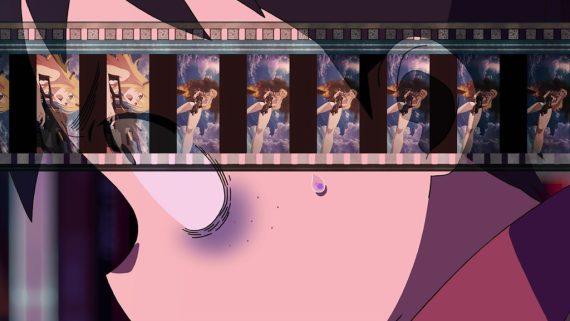 Pompo the Cinephile is the first production from new animation studio CLAP and, while I didn’t get on with it at all, I’m still interested to see more from this studio in future. There’s a frantic energy here which offsets the more static moments, with surreal and symbolic sequences depicting inner feelings or creative epiphanies through different art and animation styles. Pompo the Cinephile is a film passionately dedicated to the creative process and in these moments it really shows. If only its overall view of that process weren’t so vapid.

Pompo the Cinephile will be shown at selected cinemas in Japanese with English subtitles from Wednesday 29th June 2022, and with an English-language dub from Thursday 30th June 2022.