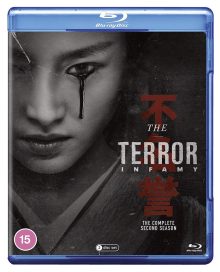 For many people, Chernobyl was the defining television event of 2019. Yet for me (and meaning absolutely no disrespect to Craig Mazin’s masterful series) the show that stole my heart and soul that year was the other Jared Harris historical drama infused with tragedy and horror. The Terror, named after one of the pair of ships that carried the ill fated Franklin Expedition on their quest to discover the Northwest Passage in 1845, was a rare television event. Stately, horrific, tragic, filled with a cast of beautifully rounded and realised characters that both honoured and expanded upon their real life counterparts, for me, it was quite simply one of the best TV shows of the last 20 years.

Ahem. So, enough rhapsodising about The Terror Season One. What we are here to talk about is The Terror Season Two (this time given the additional title of Infamy). Unusually for a TV series (maybe only American Horror Story and True Detective play a similar trick?) this new season of The Terror only continues the essence of the original series. Beyond the fusion of a real historical setting and a supernatural entity, it has absolutely nothing else to do with the continuing adventures of Messers Crozier, Goodsir and Hickey (ah, Mr. Hickey). Instead, what we are presented with is an entirely new story, setting and group of characters. Without the warm sense of the familiar, or the established framework of a continuing narrative, The Terror Season 2 certainly has a large mountain to climb…so how exactly does it fare next to its illustrious forbearer? 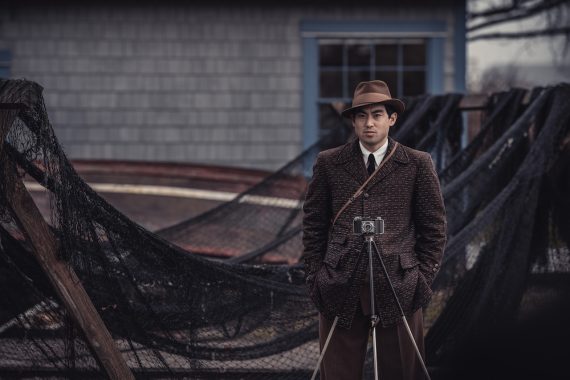 Like Season One, Infamy has chosen an underrepresented historical event as the background against which to explore both the darker side of human nature as well as a brand new supernatural threat. Set a world away from the cold Arctic wastes of the elusive North West Passage, Infamy has relocated itself to 1940s America on the eve of Pearl Harbour. Here, we are introduced to the Nakayama family. Chester (Derek Mio) a second generation Japanese American, helps his father Henry (Shingo Usam) out on his fishing boat on South California’s Terminal Island. Chester has dreams of doing something bigger with his life – a dream that may be jeopardised, however, by the fact that he has got Luz (Christina Rodlo) his Mexican American girlfriend, pregnant. After attempting an abortion, strange deaths begin to occur…yet before Chester can ascertain what may be going on, the Japanese attack Pearl Harbour. Soon, the Nakayamas, along with thousands of other Japanese citizens, find themselves imprisoned in Internment Camps by the US Government. Yet the “bakemono” (or folkloric spectre) unleashed on Terminal Island has followed them, causing unimaginable terror and threatening to bring a dark past to light… 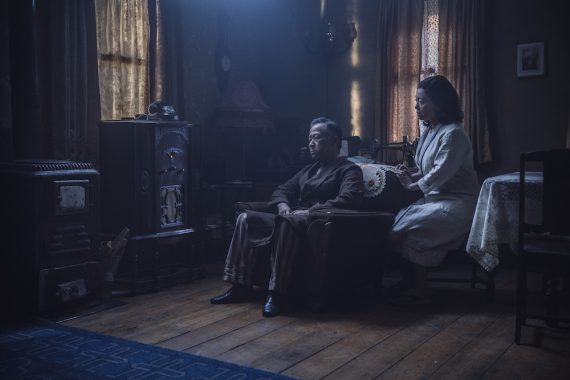 Despite surface differences, both series do share a common theme – that of being trapped in a hostile environment while being haunted by a malevolent spirit. In this regard, Season Two of The Terror presents us with something far more corporeal than the enigmatic spirit that haunted the first series, as we see Inuit superstitions swapped for Japanese ones. Fans of Japanese horror cinema, as well as Japanese folklore and mythology, will find lots to love here. Referencing everything from classics such as Kwaidan and Onibaba to the J-Horror boom of the Nineties and Noughties, Infamy boasts a tragic and cruel spirit at its heart, fuelled by volatile mixture of hate, remorse and jealously. Offering up a far more tangible and at times even temporal antagonist, the bakemono that terrorises Chester and his loved ones is formidably powerful, at times coming across more like a single minded terminator than your typical ghostly entity.

This proves to be one of Season Two’s flaws. By presenting the spirit in so bold and unsubtle a light, Infamy robs it of one of the key building blocks of fear – that sense of mystery and the unknown. By the time the final episodes role around, the bakemono, resorting to a by now rather tired and familiar shtick, becomes predictable and even a little dull. Horror fans will certainly enjoy the ride but there is no doubt that it is one they have gone on many times before. 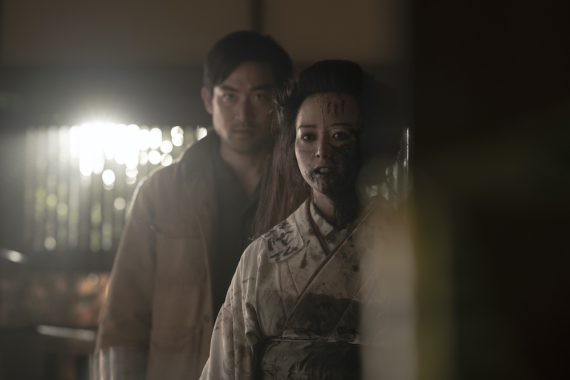 More successful is the show’s historical setting. The US government’s cruel and xenophobic treatment of its Japanese citizens feels like it has been carefully airbrushed out of history – very rarely do we hear it mentioned, let alone depicted on a mainstream television show.

Here Infamy pulls no punches, presenting the US Government as an enigmatic villain arguably as cruel as the bakemono itself. An early shot makes you catch your breath. As the Nakayamas arrive at their new ‘home’, the camera cranes up to reveal the Internment Camp, the iconography and imagery of which are inescapably linked to a different government from World War Two. As the camera continues to rise, the soundtrack softly muted, a flag suddenly unfurls in the corner of the screen. You are almost expecting to see a Swastika, but what is caught desolately flapping in the wind is the Stars and Stripes. The inference is both striking and powerful. 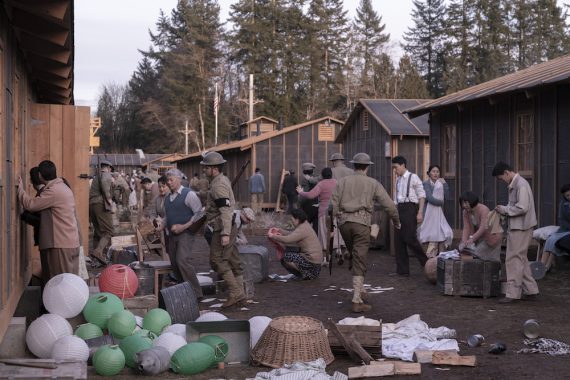 As the series continues, this sort of criticism might fade into the background occasionally but it never really lets up. It is one of the Season’s strongest elements and the show runners should be applauded for the bold stance they take in shedding a harsh and critical light on this less than favourable moment of US history.

Infamy finds other moments to show bold flashes of originality. There are several striking sequences set in a perfect ‘afterlife’ that feel particularly chilling and inventive, successfully combining a generic paradise that could equally be a vision of hell. These moments are rare, however. Beyond the historical setting and a few flashes of inspiration, Infamy stays in familiar and overtly comfortable ground. 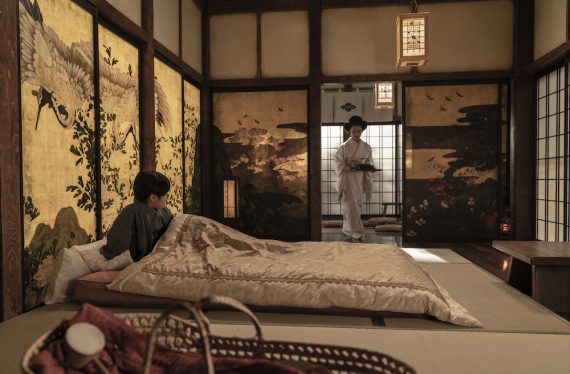 All of which leads us to Season Two’s biggest flaw; unlike Season One, the historical setting and the supernatural story never truly complement each other. Strip away the time period and the particulars it brings and Infamy’s ghost story could have been set at any time – even today. There is nothing intrinsic to the plot that significantly ties it to the historical moment. Quite often the show feels conflicted between trying to tell its historical story as well as its supernatural one. The two never quite add up and unlike like the first series, never gel into one natural whole.  Thankfully, Infamy manages to pull everything together for an emotional finale. It hits all the right notes, tying up the story in a powerfully satisfying manner, while ensuring that the themes of love and family are carefully explored without ever tripping over into trite sentimentality.

So, despite some flaws, Infamy still manages to just about hold its own, helped along the way by a strong and interesting ensemble. Christina Roldlo stands out as Luz, powerfully capturing her character’s sense of duty, love and vulnerability. Shingo Usami also delivers the goods, delivering a wonderfully layered and complex performance as Chester’s father. The biggest name here, George Takei (who also doubled as historical consultant on the show, after actually being interred at one of the US Japanese camps when he was a child) is happy to take a small but effective background role. In fact, the only slight stumbling block can be found with Derek Mio, who, shouldering the key emotional journey of the show, occasionally struggles to convince quite as much as his fellow cast members. 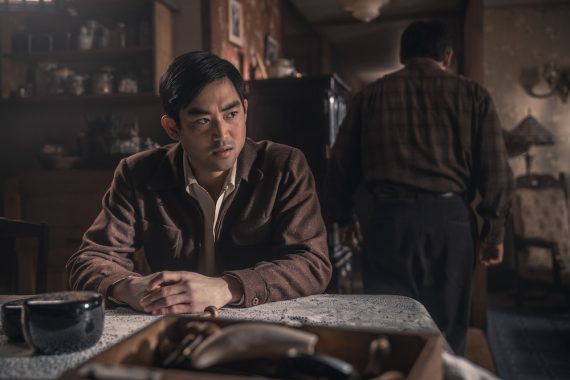 The Terror Season Two is ultimately a different beast from its predecessor. While the former was enigmatic and mysterious, this season paints its story in far bolder, less subtle colours. While some may prefer this, I feel that something has been lost along the way. With a less cohesive blending of setting and story, it never manages to live up to its predecessor’s cold, existential brilliance.

Yet, taken as an individual story, Infamy is far from a failure. Ennobled by a vital political critique and some chilling flashes of originality, this is a gripping, consistently entertaining and surprisingly emotional tale that bodes well for a third season, if we are lucky enough to get one.

The Terror: Infamy is released on Blu Ray, DVD and Digital on the 23 May. I watched most of the series via streaming but watched the last few episodes on the Blu Ray. As to be expected, there was a significant jump in picture quality, with resolution, contrast and bit rate all seeing significant improvements. Combined with both a PCM 2.0 stereo track or a DTS 5.1 track, and it is clear that the Blu Ray is the definitive way to watch this new season.

There are two very brief extras on the disc – A Look at the Series and A Look at the Characters. Each is only 4 minutes long and don’t really go into any sort of depth. They are fairly interesting but it is doubtful you’ll return to these very standard EPKs more than once.