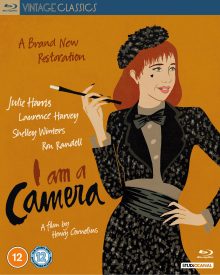 Christopher Isherwood’s 1939 semi-autobiographical novel Goodbye to Berlin (later published in his Berlin Stories collection) has certainly proved to be incredibly fertile when it comes to adaptations. No doubt you have heard of 1972’s Cabaret, the most famous interpretation of Isherwood’s work, which won a boatload of Oscars and ensured that its star Liza Minnelli ascended to the same stratosphere as her Mother.

Cabaret is still making waves today. A new West End show staring Eddie Redmayne and Jessie Buckley has gardened positive notices, the success of which perhaps prompted StudioCanal to dig in their vaults and unleash onto Blu Ray the other cinematic adaptation of Isherwood’s Weimar Republic tale. 1955’s I am a Camera, starring Julie Harris and Laurence Harvey, was itself based on a Broadway show adapted from Isherwood’s work by John Van Durten. The play was a success, so it was inevitable that a film would soon follow. Stepping into the director’s chair was Ealing alumnus Henry Cornelius, who up to this point had deftly managed to balance both comedy and drama throughout his career, directing the 1949 classic Passport to Pimlico as well as writing the screenplay for the darker Ealing fable It Always Rains on Sunday.

For those familiar with Cabaret, you will certainly be surprised by I am a Camera – and not just because that this is resolutely not a musical. The plot remains fairly identical. Set in the early 1930s (in the dying days of the Weimar Republic and a  year or so before the Nazis came to power) the film sees Christopher arrive in Berlin in order to develop himself as a writer. Taken to a cabaret nightclub by his friend Fritz, he meets Sally Bowles, a voracious and impulsive singer and performer with aspirations to become an actress on the big screen. After Sally is spurned by a fickle lover, she ends up sharing Christopher’s flat. A close relationship soon develops, one which will change their lives forever. Perhaps the most notable aspect of I am a Camera, certainly in regard to its more famous stablemate, is its tone. If Cabaret is a musical drama, then I am a Camera feels, first and foremost, like a comedy. And not just a light, frothy one either. There are moments and set pieces that feel like they belong to a Thirties screwball, with broad, almost outlandish moments that could have come out of a Fred and Ginger movie or a deleted scene from Bringing Up Baby. This doesn’t de-rail the film at all. Both Cornelius and screenwriter John Collier deftly manage to keep the comedy strong and amusing throughout, ensuring that I am a Camera is consistently fun and entertaining.

Much of the credit for this has to go to Julie Harris, deploying a completely different persona here compared to films such as The Haunting. She more than holds her own in her interpretation of Sally Bowles, capturing the lost child in the character far more adroitly than Minnelli did. While Bowles’ impetuousness and impulsiveness can make the character occasionally unlikable, Harris delivers a engagingly sympathetic and endearing performance that stridently keeps the film upright during its weaker moments – even if it echoes too strongly of theatricality at certain points. Laurence Harvey fares less well. He never truly convinces as the bookish Christopher and he feels less natural delivering the broad comedy compared to his his more spirited co-star. Anton Differing, playing Christopher’s best friend Fritz, adds depth and pathos to his character with a limited amount of screen time, something that Shelley Winters, playing Fritz’s lover, struggles to do with quite the same impact. Despite its light tone, I am a Camera does’t shy away from the darkness that bubbles underneath the surface of the story. The Nazi rise to power is largely ignored until the final half hour, but the film does find some chilling moments as German characters coldly begin to blame the Jewish population for Germany’s misfortunes.

An abject sense of poverty is also prevalent throughout the film. Christopher truly feels like a struggling writer, continually counting his pennies and at one point looking on in horror as Sally burns through his rent money in a matter of minutes. According to Isherwood, this depicts the reality of early 30s Germany far more successfully than Cabaret. Yet the heart of each of these films, and of the literary story itself, is the relationship between Sally and Christopher. Due to the time in which it was made, Christopher’s homosexuality is far more subtle in I am a Camera, blurred to the point where it is almost non-existent. Yet the platonic relationship that is the result sill feels quietly tragic. Both of these characters, with dreams of being famous and successful, are living in a fantasy, ignoring the future and the pitfalls that lie ahead. The metaphor for the situation in Germany may not be subtle but it remains powerful.

Yet it is in attempting to establish the emotional connection between the two leads which sees I am a Camera ultimately stumble. A chemistry never authentically develops, leaving the heart of the film rather hollow and ensuring that the ending feels unsatisfying and rather cheap (in the film’s defence, a sizeable amount of darker material, along with  a late plot twist, had to be significantly revised in order for the film to be released at all – even then it still earned itself an X Certificate).

There is no doubt that I am a Camera is an interesting, alternative take on Christopher Isherwood’s seminal literary work. Julie Harris offers another side to Sally Bowles that can stand tall next to Liza Minnelli’s iconic performance, while the film sheds light on aspects of the story that Cabaret either brushed over or ignored. Yet compared to Bob Fosse’s masterpiece, it feels too light and insubstantial, the relationship at the film’s heart never scoring an emotional impact. I am a Camera remains an interesting and thoroughly entertaining watch, but I feel that Cabaret will always remain the definitive adaptation of Isherwood’s tale of two lonely souls meeting and connecting on the cusp of one of the darkest times in modern history.

I am a Camera will be released on Blu Ray, DVD and Digital on 23rd May. I am a Camera has been newly restored (although Studio Canal don’t go in specifics). Needless to say, the picture quality shown on the Blu Ray is very pleasing. It may not exhibit the same pin sharp quality of some of the other films in the Vintage Classics range, but overall the presentation is typically satisfying, with decent contrast, greyscale and no egregious encoding errors.

There are two key extras on the disc. The first is a fantastic and informative biographical overview of Christopher Isherwood presented by his biographer, covering the background to the story upon which the film is based, the real life characters who appear in the film, as well as some background info on how the actual stage play and film came to be. Succinct yet incredibly informative, this serves to be a perfect accompaniment to the film.

The other extra is an an interesting 10 minute critical appraisal of I am a Camera by film critic Anna Smith. Smith offers a warm appreciation of the film, as well as offering interesting insights (such as the suggestion that the film heavily influenced Breakfast at Tiffanys).

The disc is rounded out with a stills gallery and a trailer.