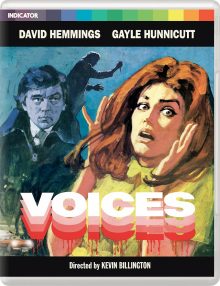 The most shocking moment in Voices, a little seen British horror from the 1970s, occurs about twenty minutes in. Our two main characters, who have decided to take a short break after a personal tragedy, arrive at a creepy old  stately home, shrouded in thick mist on the edge of a lake. They walk up the front steps, push open the front door and…

…it is not a ghost, apparition or demonic entity that suddenly causes your breath to catch in your throat. Instead, it is the sudden switch from rich, cinematic film stock to videotape that shocks you to your bones. Outside of the house, we were in a film. As soon as we cut inside, we find ourselves in an episode of TV (and a markedly cheap one at that). What the hell is going on? 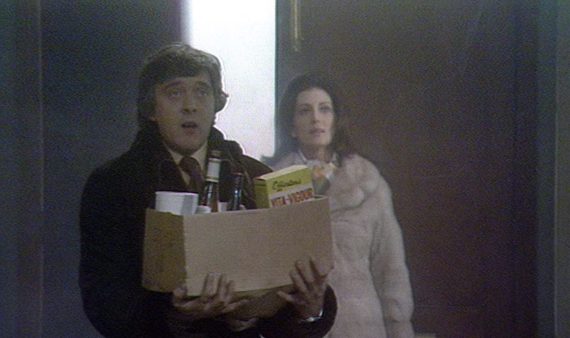 Voices is based on a one act play by Richard Lortz, which had been staged a few times in the theatre, as well as being aired on both radio and television before this cinematic adaption rolled around in 1973. Starring 1960s icon David Hemmings, alongside his real life wife at the time, the American actress Gayle Hunnicutt (who clearly enjoyed appearing in horror films during the early seventies, also starring in both Eye of the Cat and Legend of Hell House) the film tells the tale of Robert and Claire, a married couple who are recovering after the death of their son. With Claire’s mental health suffering, Robert decides to take her away for the weekend to her Aunt’s old house in the countryside, where he hopes the change of scenery will do her some good. Yet soon after they arrive, Claire begins to hear strange voices echoing inside the house. Is this yet another symptom of Claire’s mental trauma, or is there another, more sinister explanation?

Voices begins incredibly well. In a tense, expertly staged opening that strongly recalls a certain film called Don’t Look Now (which actually opened several months after Voices, so any plagiarism complaints can be left at the door) director Kevin Billington mischievously plays with his audience, quietly dragging out tension and suspense in a scenario that feels like every parent’s worst nightmare. After this harrowing prologue, Billington continues to wring a powerful sense of unease out of the material, utilising something as simple as a ringing phone to unnervingly powerful effect. 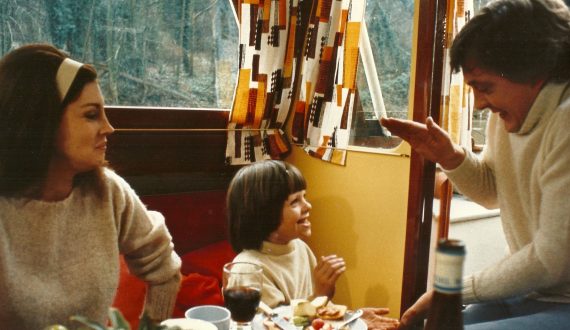 Considering that Billington clearly had the chops to make a great horror, it is such a shame that everything goes off the rails as soon as Robert and Claire arrive at the countryside house. The disorientating and inexplicable shift to the film being shot on video tape is not really the problem here. In fact, it would have been perfectly forgivable if the rest of Voices had continued in the taut, traumatic manner of its opening…yet unfortunately, that isn’t the case.

Make no mistake, the next sixty five minutes are essentially a filmed play, with Roger and Claire confined to the stately home’s fairly large entrance hall (which seems to double as a living area, complete with sofas and a fireplace) until the film’s final minutes. Again, this might have been more acceptable if these scenes exhibited anything approaching some kind of atmosphere, but appallingly bright, bland studio lighting and dull camera work kills anything approaching a tense or unnerving tone absolutely dead. This would be bad for most films but for a movie claiming to be a horror, where atmosphere is so intrinsic and crucial, it borders on the unforgivable. At times, it is almost laughable, as David Hemmings wanders around lighting oil lamps and chandeliers on a set already so bright you feel a doctor could quite happily perform open heart surgery there without too many problems. The fact that veteran DOP Geoffrey Unsworth shot this makes it even more frustrating and perplexing. 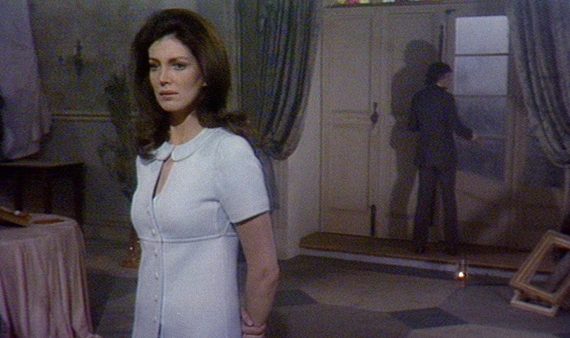 This uninspired blandness even stains the moments that have the potential to be scary. As Kim Newman and Barry Forshaw point out in their commentary, it is as if Billington either can’t be bothered or simply doesn’t care, capturing ghostly apparitions so dully, you’ll likely find more creative spark watching the evening news.

This disorientating shift from atmospheric cinema to the bland confines of a TV studio (and the set feels very much like a TV studio, never a real location) is reflected in Hemmings and Hunnicutt’s performances, which switch, as suddenly as the cameras, into theatre mode. This, along with Billington’s refusal to shoot his ghost story like, you know, a ghost story, might have been tolerable if the the actual play written by Richard Lortz was engaging. There are interesting themes to be explored here, such as grief, guilt and mental illness, but any potential sparks of interest are killed by a leaden pace and clunky, wooden dialogue. The fact that Hemmings’ character feels like the kind of husband the word ‘mansplaining’ was invented for certainly doesn’t help matters. 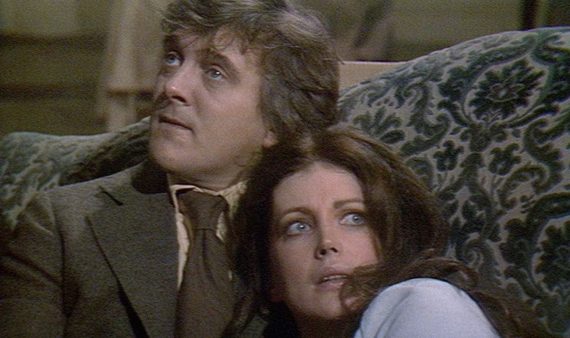 Voices does manage to pull itself back from the brink of disaster in its final moments, which sees Billington switch back to film for an ending that strongly recalls a certain horror from the early 2000s (which I won’t name for fear of giving anything away). Apart from the opening, it is only in these final few minuets that the film achieves anything close to a haunting atmosphere.

Voices, then, is a bit of a bizarre oddity. Bookended by two atmospheric sections captured on film, the main portion of the movie, shot on video, is a bland, dully written slog. It does have its merits in that it attempts a rather unique experiment in combining theatre and film; it is just a shame that that experiment is so unsuccessful. For avid collectors of 70s horror or British cinema, Voices is worth checking out as an interesting historical curio. Anyone looking to buy Voices expecting a decent horror or ghost story, however, will likely be sorely disappointed.

Voices will be released by Indicator on Blu Ray on the 21st February. Powerhouse Films have restored the film in 4K and the film elements that bookend Voices look fantastic. Obviously, the video portion of the film exhibits a significant downgrade in quality, but that is only to be expected considering the switch in medium. The same can be said for the audio, which feels slightly more compressed and stilted during the video portion – but still perfectly legible. Overall, I have no doubt that this is most likely the best Voices has looked and sounded since its original cinema release in the 70s.

There are a few extras on the disc, which can be seen below:

The audio commentary is the most substantial extra here. Kim Newman and Barry Forshaw offer a lively and entertaining discussion of the film, discussing its both its background and the careers of the key personnel involved. They also happily discuss what they liked about Voices (paying particular attention to some original moments) and break down what they thought didn’t work. Towards the end, they get into a really interesting discussion about ghost stories and their continued relevance today. Altogether, this is a great listen.

Next up are three short video pieces. The first, Wide Boys, is hosted by film historian Vic Pratt, who provides a 18 minute history of Hemdale, David Hemmings and John Daly’s production company (which made some pretty iconic films, including Platoon, The Terminator, The Amazing Mr Blunden and The Last Emperor). This is a very interesting history of a film company I’m sure many of you would have heard of but not many would know the background too. Definitely worth a watch. Next up, film maker Peter Crane discusses his friendship with Hemmings, offering an interesting if brief insight into the actor. Lastly, Voices from the Past is a very brief look at the restoration process behind the film. I actually found this to be too brief and would have loved to have had an extended look at the work involved!

The disc is rounded out with an image gallery containing several production stills and photos of Voices’ press book, as well as one of Indicator’s usual high quality booklets. This contains a short critical appreciation, a collection of interesting interview snippets with with both Hemmings and Hunnicutt, an insightful look at how the play was adapted into a script and finally a collection of contemporary reviews (of which very few were favourable).