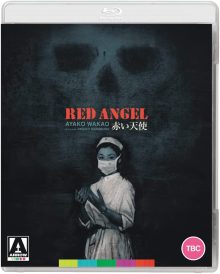 Arrow continue to celebrate the work of Yasuzô Masumura, a director respected in Japan but little known in the West, by releasing his 1966 wartime drama Red Angel (a.k.a. Akai tenshi) on Blu-ray. The film marked the 15th of 20 collaborations between Masumura and the actress Ayako Wakao, who proved to be his muse for a good portion of his career. A number of the director’s most beloved films came from this relationship, including Irezumi, which was released in the same year as Red Angel.

Having loved Irezumi and been impressed with Blind Beast too, I was eager to dig further into Masumura’s filmography, so requested a screener for Red Angel. My thoughts on the film and disc follow.

Red Angel sees Wakao play Sakura Nishi, a young nurse who’s tending to wounded and sick soldiers during the Second Sino-Japanese War. At her first posting, she’s raped by a patient called Sakamoto (Jôtarô Senba). She reports him the next day and the soldier, who, like many on the ward, is dragging out his hospital stay to keep from seeing more combat, is sent back out to the front lines.

Nishi, herself, is later sent to work on the front lines, in a field hospital. Working on floods of injured soldiers, most of which are beyond much help, other than pain relief and amputation to avoid gangrene, she soon comes across Sakamoto again. The soldier has been seriously wounded and is unlikely to survive but, worried that his death is some sort of fate for what he did to her or that she was responsible for having him sent back to fight, Nishi begs Dr. Okabe (Shinsuke Ashida) to give Sakamoto a blood transfusion.

With blood in short supply, only wounded senior officers are usually allowed to be given such treatment and Sakamoto’s chances of survival would still be slim anyway, so Okabe initially refuses to perform the transfusion. However, after further pleading from Nishi, he agrees, on the condition that the nurse comes to his quarters later that night.

Nishi agrees to these terms but is surprised to find that Okabe only wants to talk and drink expensive wine with her. It later turns out that the doctor is impotent but the pair form a close relationship among the trauma of the war surrounding them.

As with the other Masumura films I’ve reviewed, I didn’t quite know what to expect from Red Angel. I’d read it was about a wartime nurse, so I presumed it wouldn’t be a barrel of laughs, but nothing quite prepared me for how shocking the film would be.

Whereas most war films portray ‘war as hell’ through violent action sequences in the field of combat that, let’s be honest, are often more exciting than disturbing, Red Angel stays largely in the hospitals, displaying the horrific aftermath of battles. One of the contributors on the disc’s extra features dubs the film “M*A*S*H without the jokes” and that’s actually quite accurate, though it doesn’t prepare you for the grim experience of Red Angel.

Masumura explores the idea that warfare is a dehumanising experience. As Okabe puts it early on in the film, “soldiers aren’t human beings. They’re objects… just weapons”. The camera lingers on fields full of bodies either dead or soon to be and buckets of severed limbs, as well as symbolic shots like piles of dog tags being collected from the corpses.

The surgery scenes are particularly disturbing too. Whilst Masumura often prefers long takes, these grisly sequences are expertly edited with fairly quick shots that show just enough to unsettle without graphically showing saws cutting through flesh. The deeply unsettling sound design is also crucial to the impact of these scenes.

It’s not all about gore and wartime casualties though. The main theme of the film is that of the link between sex and death. The three men Nishi has sex with, consensual or otherwise, all die tragically and her role in this, specifically her sexuality, is explored in each case.

Within this theme, the film could be considered particularly brave at the time in openly discussing the use of “comfort women” on the front lines as well as the issue of warfare preventing men from releasing their sexual urges. This latter aspect is most notably explored in a side-plot that sees Nishi take pity on a double amputee. He is unable to pleasure himself to suppress his libido and it’s causing him pain and mental torment, so Nishi agrees to secretly perform sexual favours for him.

Such scenes could be seen as exploitative but it’s a fair point to make, even if some might find it uncomfortable.

With such subject matter, the film is obviously not an easy watch, but Masumura and his editor, Tatsuji Nakashizu, keep the film taut and lean, rattling through its short running time. This helps keep you hooked despite the heavy, deeply troubling on-screen activity.

The film looks striking too, with each wide frame carefully composed, without losing any sense of naturalism, and high-contrast low-key lighting giving a distinctly noir-ish look to proceedings.

There’s a hint of patriotism towards the end and, as David Desser argues in his commentary, we don’t see the horrors afflicted on the Chinese by the Japanese. The film very much makes the Japanese out to be the victims. At the same time though, the film doesn’t openly point to the Chinese as enemies as such, only damning the act of war itself. Particularly through Okabe’s philosophical monologues, Red Angel takes an unvarnished, cynical view of war, rather than one taking any national or political sides.

Overall, the film is one of the most powerful war movies I’ve ever seen. It’s unflinching at every turn and relentlessly grim from start to finish. As such, it’s far from easy viewing but Masumura’s expert direction and an interesting perspective on the role of sex during wartime keep you transfixed. As an anti-war film, it’s far more effective than most of its melodramatic, action-heavy American counterparts. There’s little tugging of heartstrings here. You won’t be reaching for the tissues. Instead, you’ll find yourself almost numb from grief and misery. That might not sound like a strong selling point, but this exceptional film deserves to be seen, even if it’s a tough watch.

Red Angel is out on 17th January on Blu-ray, released by Arrow Video. The picture quality is decent. The contrast is very high, which might be how it was originally intended to look, but I found the whites a fraction burnt out in places and the blacks a little too heavy, reducing detail in the darker scenes (of which there are many). It’s otherwise a pretty stable and pleasing image though. Screengrabs have been used throughout this review for examples. Audio is solid too.

David Desser’s commentary is excellent. Incredibly well researched, it’s rich with insight into the period of Japanese history being depicted as well as providing a deep analysis of the film.

Jonathan Rosenbaum’s essay makes a good comparison between the film and the work of Sam Fuller as well as examining what he thinks is special about Red Angel, whilst acknowledging its faults.

Tony Rayns provides background to the film, how it came about and how it might be seen within Masumura’s filmography.