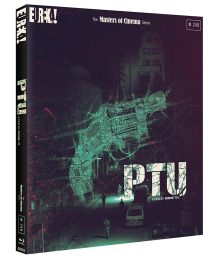 Genre can be a funny thing. On the one hand generic tropes and conventions can be a blessing, not only by helping to take the sting out of cinematic decision making but where the familiar or expected can turn out to be a comfort. Yet genre can equally be a hindrance. Stick too close to what is typically expected and you can be left with a film that feels dull, predictable and unoriginal. On the flip side of that are the films that you expect to be one thing and then turn out to be something completely different. They establish standard generic tropes and then run away with them in completely unexpected directions. These films can be unmitigated, over ambitious disasters or (thankfully far more often) they can turn out to be fresh and unique cinematic gems. PTU, one of June’s new releases from Eureka, thankfully turns out to be one of the latter.

PTU’s set up is simple yet intriguing, taking an initial plot point from Akira Kurosawa’s Stray Dog. After a nighttime confrontation with some Triads in Hong Kong, Sergeant Lo (Suet Lam) loses his gun. Fearing that it has fallen into criminal hands, Sergeant Mike (Simon Yam) the hard edged leader of the PTU (Police Tactical Unit) decides to help Lo recover the lost weapon. Yet what starts off as simple soon grows more complicated, as Lo and Mike navigate between two rival Triad gangs involved in a turf war as well as investigations by both Vice and Homicide squads, who are engaged in their own rivalries and battles. With only one night to find the gun, will Lo and Mike be able to locate and recover it before daybreak?

From the sounds of the story, I was expecting PTU to be something akin to a Far Eastern version of a Michael Mann film. It certainly has all the right ingredients and tells its story with a similar sense of intricately crafted cinematic scale that marks out Mann’s best work, yet this 2003 film from prolific Hong Kong director Johnnie To turns out to be something rather different than what its component parts might suggest.

For anyone expecting a pacy, edge of your seat Hollywood thriller (like I was) then get ready to be pleasantly surprised. For much of its running time, PTU is slow and measured, taking its time building up tone and atmosphere. A key sequence towards the middle of the film, for example, finds members of the PTU carefully ascending a stairwell in a dangerous building. Johnnie To extends and draws this sequence out far longer than you might expect, letting the 80s esq soundtrack to swell and grow as each team member glacially ascends the dark and moody building. Another sequence set at an arcade takes deliberate pleasure in watching Sergeant Mike interrogating two Triad members with torturous results. This is a film where atmosphere and detail take precedent. You being to feel less the influence of Michael Mann and more that of the detached, unhurried cool of Jean-Pierre Melville.

The unusual atmosphere established by the pacing is only further embellished by the world in which PTU takes place. Set during one night in Hong Kong (one of the busiest cities in the world) it soon strikes you that something seems to be amiss…then you realise that in the world of PTU, Hong Kong is entirely deserted. Long, dark stretches of urban streets, lit only by pulsing neon or artfully placed street lights, help to convey a languid, almost ghostly atmosphere. The only people who appear on the streets are members of the film’s various police departments and Triad gangs, with the result that the vast, deserted city begins to feel oddly intimate. Coupled with the deliberate pacing and carefully considered, theatrical lighting of the cities’ streets, PTU occasionally feels like it is taking place in its own unique, intimate universe, in touch with reality but laced with a dream-like incongruousness.

PTU is frequently described as a noir, and while the plot certainly contains nourish elements, I felt that the film far more resembled a modern day take on a Western. Johnnie To shoots Hong Kong like Leone captured his version of the Wild West, with lots of beautiful, deep focus wide shots coupled with graceful camera dollies and movements. Towards the climatic ending, To then pays homage to Sam Peckinpah as all the disparate plot stands and characters come together for a fateful finale.

It is perhaps best to state here that this is the first Johnnie To film that I have seen. Being completely unfamiliar with the director’s work, I had no idea what to expect. To say that I was pleasantly surprised would be an understatement. Right from the start, PTU exudes a visceral cinematic atmosphere that establishes it not only as a film in love with the work of previous cinematic masters (Leone, Kurosawa) but one that finds its own unique cinematic voice that is frequently thrilling to watch.

Yet for all its technical brilliance, PTU doesn’t end up being a perfect film. The deliberately slow pace occasionally hampers as much as it elevates, which sees the middle of the film sagging as interest wanes. And while the atmosphere is undeniably unique, I did at times find myself wishing for some more thrilling or exciting moments.

Yet these small flaws do not seriously detract from what is an undeniably impressive piece of film making. PTU contains great performances (you’ll be surprised to lean that Suet Lam, who plays Sergeant Lo, isn’t even a professional actor!) a unique atmosphere and more great shots than you could shake a stick at. The plot and dialogue may not break any new ground or have much substance, but as Frank Djeng brilliantly puts it in his commentary, ‘the style is the substance’. He couldn’t be more right. The film has certainly piqued my interest to explore more of Johnnie To’s work, as PTU is a slick, beautifully cinematic and unique take on an action crime saga that will linger in the memory long after the final gunshots have faded into silence.

PTU is released on Blu Ray by Eureka on their Masters of Cinema label on the 21st June. The picture quality on the disk is wonderful. This being a film that is entirely set at night, there was potential for crushing and bad macro-blocking in the encoding, but thankfully Eureka have knocked it out of the park with this release. Contrast is incredibly strong throughout and the film maintains a stunning amount of detail and stability in the darker areas of the picture. Those lucky enough to have an OLED will be drooling over all the inky blacks. The sound too is great, with the original Cantonese language track coming in both a punchy DTS 5.1 track and an LCPM 2.0 track. A dubbed English track is also included. Fantastic all round.

The following extras are included on the disc:

Audio Commentary: Frank Djeng provides the audio commentary for PTU (you might be familiar with him from Eureka’s previous Johnnie To release, Throw Down) and he proves to be a veritable machine gun of information. Djeng is a fast speaker and he moves swiftly from subject to subject, covering a wealth of information, from the film’s geographical inconsistencies to the filmic references to Kurosawa. A great listen both for fans of the film and Johnnie To’s work.

Interviews: There are two sets of interviews on the disc. The first two, with director Johnnie To and Simon Yam, are sourced from the DVD era and are of standard 4:3 SD quality. They both prove to be interesting watches however. A second, better quality set of longer interviews are also included, again with To and Yam as well as Maggie Siu, who plays one of the PTU officers in the film. These additional interviews thankfully don’t re-cover too much ground from the first set or from the commentary. Simon Yam goes off on a bit of a tangent at times but overall these are great additions to the disc and really help to provide an insight into Johnnie To’s aims and ambitions for PTU.

The disc is rounded out with a trailer. The first 2000 copies of PTU also come with a slipcover and with a booklet containing an essay by writer and journalist David West. The essay provides great background info to the film as well as a wonderful analysis. If you’re a fan of PTU, don’t miss out – snap up an edition fast!