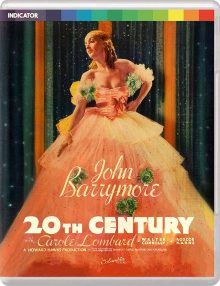 Columbia’s ever-frugal Harry Cohn liked to buy successful Broadway plays to adapt into films, as they were usually a safe bet due to the built-in audience appeal. So, when Howard Hawks, who had just torn up his contract with MGM, approached Cohn with a proposal that Twentieth Century be his next project, the mogul swiftly agreed. The film was based on a play by Ben Hecht and Charles MacArthur (authors of ‘The Front Page’), who in turn had based that on the unproduced play ‘Napoleon of Broadway’ by Charles Bruce Millholland. Hawks jumped swiftly into production and though the film wasn’t a huge success, it marked a number of important turning points for those involved and Hollywood in general.

For one, Twentieth Century, along with the much more successful It Happened One Night (which came out two months earlier), launched the screwball comedy genre. The latter may have been released first, but Twentieth Century has more of the energy and anarchy that typified the style. The film also set both Hawks and star Carole Lombard on the road to becoming the king and queen of screwball.

Lombard took it one step further than this. After struggling to make a name for herself for more than a decade, including a major setback when she was scarred in a car accident, Twentieth Century helped Lombard find a niche in comedy and led to her becoming Hollywood’s highest-paid star by 1937. Tragically, she died only 5 years later in a plane crash, but at least she finally gained the mega-stardom she deserved and worked so hard for. 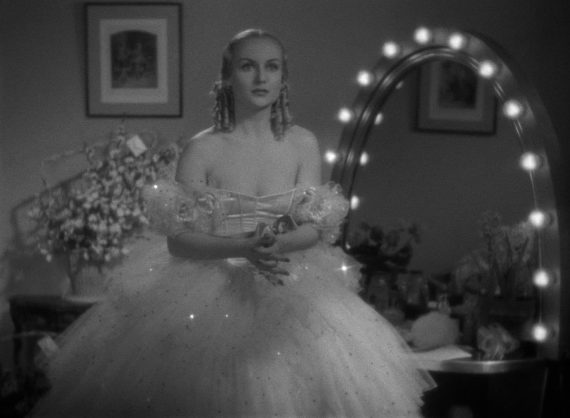 Keen to remind us all of the joys and importance of Twentieth Century, Indicator are releasing the film in another one of their carefully polished and compiled Blu-ray packages. I got my hands on a copy to see how it held up.

Twentieth Century opens with Mildred Plotka’s (Lombard) first on-stage rehearsal for the eccentric Broadway impresario Oscar Jaffe (John Barrymore). He came across this lingerie model one day and believed she had a talent for the theatre. So, forcing a name change on her to Lily Garland, Jaffe put the young woman in the lead role of his next play. However, rehearsals are not going well. Plotka/Garland seems to have no talent for acting, coming across as stilted and lifeless.

After a lengthy and torturous day of complex and ever-shifting direction though, culminating in using a pin-stab to the posterior to elicit a scream, something in Garland clicks. Her performance is heralded as a revelation and she stars in hit after hit for Jaffe, on top of forging a romantic relationship with him.

However, all is not well off-stage. Garland, now filled with confidence and bravado, is fed up with the way Jaffe controls and monitors her every move, as well as taking credit for all of her success. The final straw comes when he has a private detective follow her, leading Garland to walk out on Jaffe and go it alone in Hollywood. 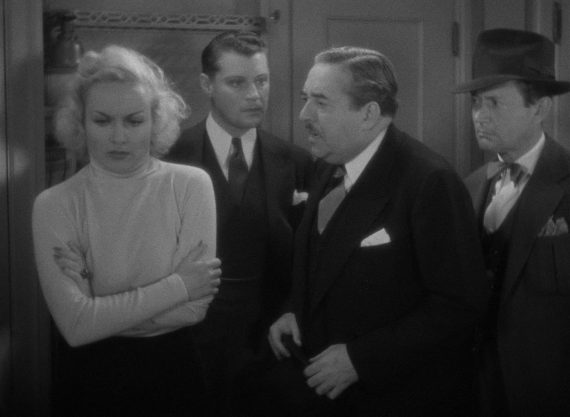 Jump forward another year or two and Garland is a huge star, whilst Jaffe’s subsequent productions have all flopped. With a threat of bankruptcy, Jaffe is desperate and spies a chance at redemption when he discovers Garland is on the same ‘Twentieth Century Limited’ train as him, headed for New York. So, the conniving impresario hatches a scheme to try and win her back.

Like all the best screwball comedies of the era, particularly those directed by Hawks, Twentieth Century is a fast-talking, raucous ride from start to finish. Despite centring around two pretty unlikeable and devious characters, it remains incredibly funny and eminently watchable. It’s filled with witty zingers and numerous jabs at the theatre, including some knowing jokes aimed at leading man John Barrymore, who was a notable stage actor as well as a big film star.

Speaking of whom, Barrymore is a sheer delight in the film. He was a bigger star than Lombard back then, so gets more screen time and makes the most of it. Reportedly, Hawks sold the film to the actor by saying “It’s the story of the greatest ham in the world, and God knows you fit that.” Barrymore doesn’t disappoint in this respect, hamming it up to the extreme, perfectly sending up the stereotypically flamboyant and passionate prominent figures of Broadway. 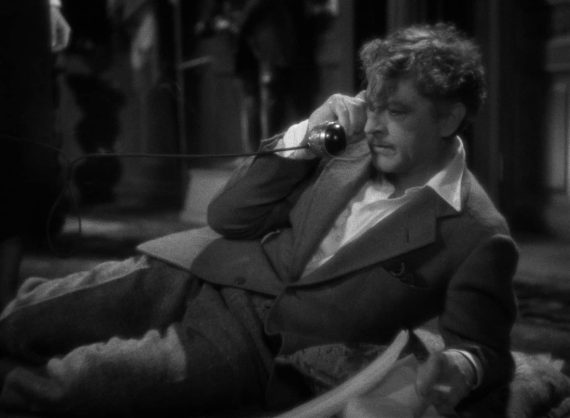 Lombard more than holds her own against Barrymore though. She gets to display more range too as, in the opening scenes, she’s a fairly meek nobody and has to act like a bad actor, before developing through the rest of the film to become just as egotistical and demanding as her male counterpart.

The first act, in which Jaffe coaxes the performance out of Garland, feels very genuine too. It says a lot about the art of direction and performance. Reportedly, Lombard was having real problems with her performance on the first day of the shoot and Barrymore was growing concerned, letting Hawks know about it. Here is how the director describes what happened next in an interview with Peter Bogdanovich in 1962;

“I said to her, ‘Come on, let’s take a walk,’ and we went outside, and I asked her how much money she was getting for the picture. She told me and I said, ‘What would you say if I told you that you’d earned your whole salary this morning and didn’t have to act any more?’ And she was stunned. So I said, ‘Now forget about the scene; what would you do if someone said such and such to you?’ And she said, ‘I’d kick him in the stomach.’ And I said, ‘Well, he said something like that to you, why don’t you kick him?’ And she said, ‘Are you kidding?’ And I said, ‘No.’ So we went back on the set, and I gave her some time to think it over, and then we tried that scene, and we did one take, and that was it. And, afterwards, Barrymore said, ‘That was fabulous!’ And she burst into tears and ran off the set. She never began a picture that she didn’t send me a telegram saying, ‘I’m gonna start kicking him.’” 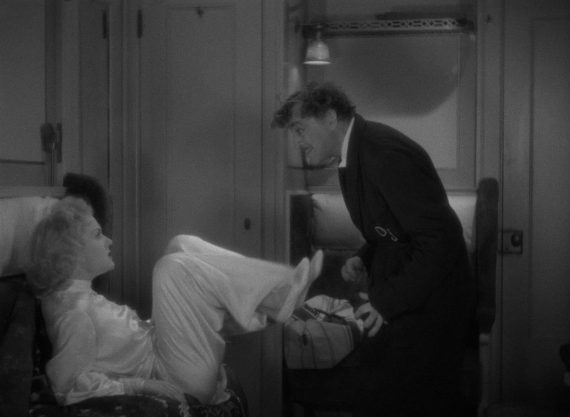 Despite all the talent going into the production (I’ve not even mentioned the cast of wonderful character actors filling the rest of the roles), I don’t feel it quite reaches the heights of some of the very best screwball comedies. Its fast pace and loud nature get a bit much after a while, so the film felt a touch overlong. The story isn’t as intricate, tightly woven or as clever as in some other classics of the genre either, which might be largely why I felt it lost a little steam as it went on.

However, Twentieth Century still remains a winning example of the joys of Golden Age Hollywood. It helped pave the way for many more comedy classics from Hawks and showcase some hugely enjoyable, larger-than-life performances. It’s perhaps too fast-paced for its own good, exhausting the audience before it’s done, but the film is still a hell of a lot of fun. 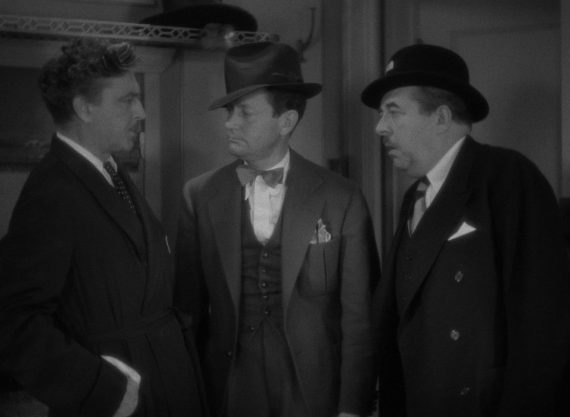 Twentieth Century is out on 22nd March on Blu-Ray in the UK, released by Indicator. The picture quality is great for a film of its era. There is no notable damage and there’s a fair amount of detail and dynamic range for such an old film, as well as a natural-looking grain. It’s not as sharp as some later pictures, but it looks great, all things considered. The stills used in this review are screengrabs to give you an idea of what it looks like, though it looks better in motion. Audio is solid too. Again, you can’t expect ultra-pristine clarity from this early period in sound cinema, but it’s as good as it’s ever likely to sound.

There are also plenty of special features included in the Limited Edition package:

Farran Smith Nehme’s commentary is enjoyable and very informative. She has a lot of interesting facts and stories about those involved in the film.

Bogdanovich’s piece is short but sweet, listing the reasons why he loves the film and why it’s important.

The piece on Lombard provides a fascinating overview of the actress’ life and career.

The radio adaptation is good too, offering a different spin on the material with an alternative cast. Welles is a great choice for Jaffe though he doesn’t quite have Barrymore’s energy.

The Super 8 version has curiosity value but is perhaps not a vital part of the set.

As usual, the booklet is excellent. It contains an illuminating essay on the film, an entertaining interview with Hawks and plenty of archive reviews.

So, another fine package from Indicator. Recommended.