The Gates of Video Hell is a feature I came up with 5 years ago but haven’t kept up with where I watch films I’ve found on VHS in charity shops or car boot sales that have never been made available on DVD or Blu-Ray in the UK. Rather than rate them out of 5 stars as usual, I’ve decided to deliver their fate instead. My judgement comes in the form of one of the following 3 decisions: 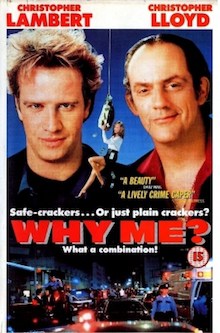 Why Me? is a comedy crime caper based on a book from the John Dortmunder series by Donald E. Westlake. It opens with a supposedly cursed and priceless ruby called the Byzantine Fire arriving on loan to the US from Turkey. At the handover ceremony, however, it’s stolen by terrorists from the Armenian Liberation Party. They hide it in a jewellery store, but the legendary safecracker Gus Cardinale (Christopher Lambert) and his partner-in-crime Bruno Daley (Christopher Lloyd) steal it that same night, during what they thought was a standard jewellery store heist.

Bruno assumes the ring is fake and chucks it in the bin whilst heading off to sell the diamonds he nabbed. However, when the news breaks out and he realises what he’s got his hands on, he lands himself in a whole heap of trouble. 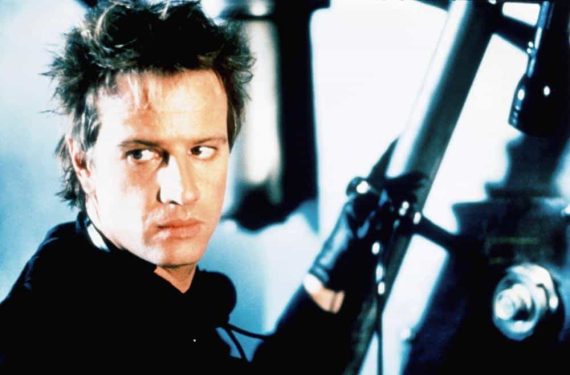 Not only are the Armenians after him, but the police and CIA are hot on his heals (knowing he’s a famous safecracker), as are the Turks who want their treasure safe and the local crime boss, Tiny (John Hancock), wants to find the ruby too, as all the cops sniffing around are bad for business. Gus, Bruno and Gus’ long-suffering girlfriend June (Kim Greist), who also happens to be Bruno’s daughter, do their best to stay ahead of their crowd of enemies.

I enjoyed this a lot. I’ve got a real soft spot for these wacky crime capers with overly complicated plots and healthy dollops of humour to remind you not to take the chaos too seriously.

It’s fairly conventional at heart, hardly breaking new ground in the caper genre, and the one thing it’s lacking that I usually enjoy in similar films is the truly ingenious plan. Most of Gus’ techniques are pretty dumb, to be honest. 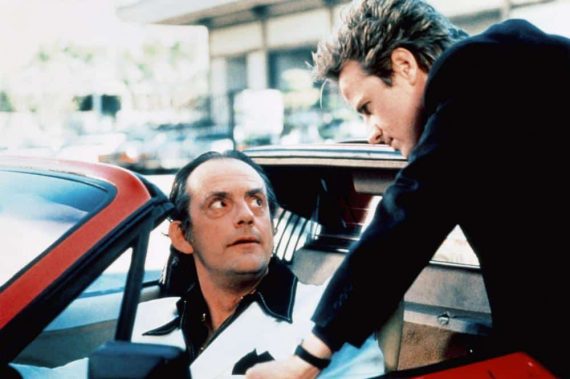 However, one of the film’s main saving graces is that it’s genuinely funny. The script (written by Jurassic Park scribe David Koepp alongside Westlake) is full of playful banter and wisecracks. Some of the humour is pretty wacky and gets quite dark at times. In particular, there’s a crazy terrorist that keeps cropping up, threatening Gus, saying she’ll kill members of her own family if he doesn’t deliver the ruby. In the wrong hands, this could have been quite disturbing (albeit nonsensical), but it’s played wildly over-the-top so adds to the zany charm of the film.

Most impressive though is the cast. Lambert is solid as the straight-man, Greist has the oomph to raise herself out of a typical love interest role and Lloyd is his usual wild self (though the role is a little underwritten), but it’s the supporting cast that truly shines. Most impressive is J.T. Walsh as the foul-mouthed head of police. Straight from his expletive-laden introduction at a press conference, he blows everyone else off the screen. He’s got a fairly chunky role and knocks every scene he’s in out of the park. 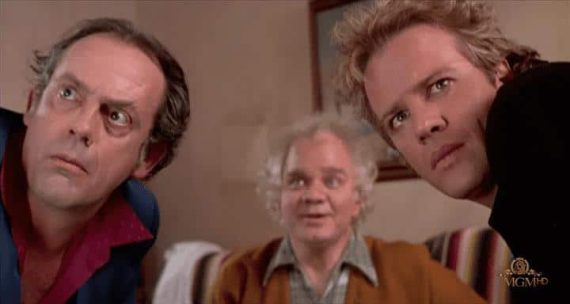 There’s a handful of great character actors cropping up elsewhere too, such as Michael J. Pollard, John Hancock and Tony Plana and they all deliver their usual schtick with great aplomb.

So, it may be a typical 80/90s high concept crime-comedy but it’s a lot of fun. Aided by an excellent supporting cast it’s a retro blast that’s worthy of rediscovery.

None, unfortunately. It was a sell-through copy.