The Gates of Video Hell is a feature that Dave came up with 5 years ago to give a shout out to films from the Golden Era of VHS (I still miss it!) and unearth some forgotten gems. A few us are jumping on the bandwagon (mainly because some of us still actually have VHS collections!!!) and bring lost classics, crazy titles and just plain odd films to the masses. Dave’s rating system is as below but I may rate them just as any other film as I appreciate VHS as much as anything from Criterion, Eureka, BFI, Arrow, Artifical Eye and all that shizz! : 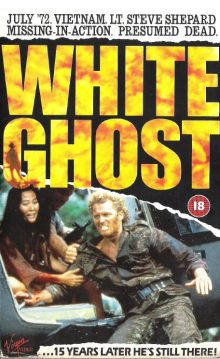 Back in the 80s the first two Rambo films pretty much created a sub-genre of jungle set action films often set around the theme of either rescuing POWs or a military unit hunting down a one-man-army. And of the hundreds of cheap-jack imitations that clogged up video shelves back in the day (ah halcyon days!) White Ghost is one of the better and an absolute doozy.

Combining both the POW and one-man-army slant, White Ghost sees MIA solder Steve Shepherd (Katt) eeking out a Tarzan-like existence (complete with long hair and little clothing!) in the jungles of Vietnam. He and his squeeze Thi (Chao) attempt to live as normally as they can while still eluding the Vietnamese army. Nicknamed the White Ghost due to his expertise at eluding capture and using the jungle to his advantage, word of Shepherd still being alive reaches the US who send in a crack team of black op soldiers to bring him back. However, said team is lead by the insane Walker (Crawford) who has beef with Shepherd and has no intention of bringing him back. Cue Shepherd using his jungle skills to thwart the US soldiers, and the Vietnamese army, in typical 80s hyper violent fashion. 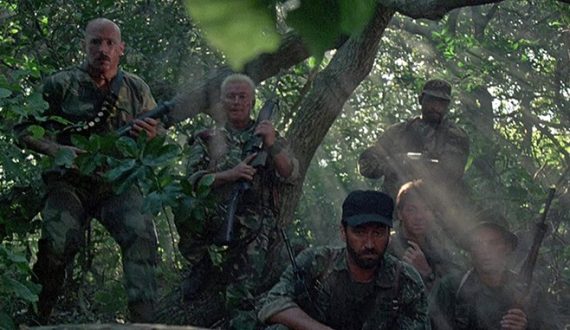 Directed by long-time stunt ace BJ Davis, produced by one time mini-mogul Wayne Crawford (Jake Speed, Night of the Comet) and written by future Fast & Furious franchise starter Gary Scott Thompson, White Ghost is a little better put together than a lot of trashy 80s Rambo wannabes. Sure, it still brings the craziness, the ultra-violence and heaps of action but there is skill behind and in front of the camera. William Katt (House) plays the almost silent hero well (despite a dodgy haircut!) giving him a little more depth than your usual 80s muscle bound action hero. Rosalind Chao (What Dreams May Come, The Joy Luck Club) is great as the hero’s suffering partner but gets in on the action come the finale and Wayne Crawford all but steals the film as the utterly demented Walker determined to hunt down Shepherd at any cost. He’s an absolute hoot. 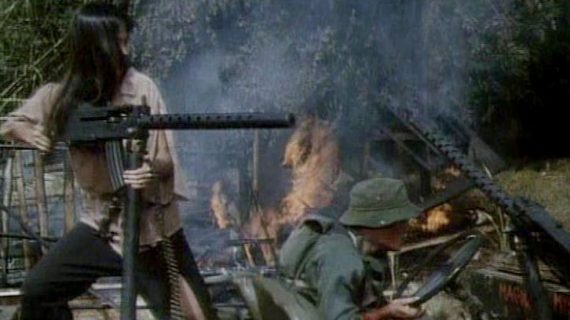 The jungle setting and action also give White Ghost cred with plenty of machine gun strafing, jungle huts blowing up, knife fights and crazy jungle booby traps to sate the most hardened 80s action fan. The film also has a surprisingly gory streak to it with some rather nasty torture scenes and most of the expendable cast meeting graphic deaths. This gives the flick a slightly edgier exploitation feel, making it a wholly satisfying jungle actioner with plenty of “oh shit!” moments! It may be a little dated, unsophisticated and 80s action stalwart Reb Brown (Robowar, Strike Commando) only gets one scene where he fires two machine guns while gurning loudly (shame!) but for jungle set 80s actioners/Rambo clones, White Ghost is one of the best.

Judgement: While I fired up a trusty VHS copy turns out this has actually had a DVD and Blu Ray in several territories (including a bink and you’d have missed it UK DVD release!) and you can watch it on Amazon Prime. Oops!

So, I’m giving it 4/5 as it’s some crazy action awesomeness and I would sayResurrect on Blu-Ray in the UK with interviews from the cast, as it would be great to hear about the making of the flick.