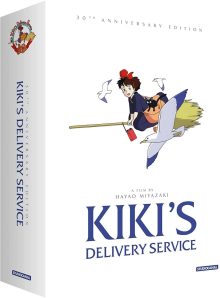 Following on from the success of Nausicaä of the Valley of the Wind writer/director Hayao Miyazaki founded the now much-loved Studio Ghibli alongside fellow anime writer/director Isao Takahata and producer Toshio Suzuki. The first three films made by the studio (Laputa: Castle in the Sky, Grave of the Fireflies and My Neighbour Totoro) were, and still are, highly regarded but only did fairly well at the Japanese box-office, compared to the successes they’d enjoy in the years to follow. Part of the reason My Neighbour Totoro wasn’t the smash hit you might think (given the popularity of the character now in Japan) was that it was actually released in theatres in a double bill with the harrowing and less child-friendly Grave of the Fireflies.

However, the studio’s follow-up Kiki’s Delivery Service, once again directed by Miyazaki, was the highest-grossing film of 1989 in Japan. From then on, Studio Ghibli would dominate the Japanese box office and over time it would become well known around the world. It’s a brand synonymous with quality that stands tall alongside Disney and Pixar in the world of animation (Disney distribute Ghibli films in certain territories so there’s crossover of course).

However, even though Kiki’s Delivery Service was a financial turning point in the studio’s history, I don’t usually think of it as one of the studio’s greats. This might be due to my preference towards the ‘epic adventure’ side of its output though (e.g. Nausicaä, Princess Mononoke and Laputa) as I imagine a great many people would disagree. With Studiocanal releasing a wonderful 30th Anniversary Collector’s Edition repackaging of Kiki on dual format Blu-ray and DVD, I figured it was high time I re-appraised the film. On top of my tastes having matured and mellowed over the years, I’ve fathered two daughters since last watching it and I thought they would enjoy it a great deal. So I popped it on (with the English dub – sacrilege!) to see what they and I now thought about it.

Kiki’s Delivery Service tells the story of young Kiki (Minami Takayama or Kirsten Dunst in the English dub) who’s just turned 13. She’s no ordinary girl though, she’s a witch, and, according to tradition, young witches must leave home for a year when they’re 13 to complete their training to become a fully-fledged witch. So she heads out of her countryside home on a broomstick, with her black cat Jiji (Rei Sakuma or Phil Hartman – believed to be his last recorded vocal performance before his tragic death) in tow, and ends up in Koriko, a beautiful city by the ocean. Kiki is out of her depth there at first but helps the pregnant bakery owner Osono (Keiko Toda or Tress MacNeille) who lets her stay in her spare attic room. There she sets up her own business, delivering packages for people in the area. This goes quite well, though she runs into trouble now and again and still struggles to fit in. In particular, she doesn’t quite know what to do about Tombo (Kappei Yamaguchi or Matthew Lawrence), a teenage boy who takes a shine to her due to her flying ability (he’s an aviation nut) and doggedly pursues her.

These troubles and uncertainties lead to Kiki losing her powers, so Ursula (Minami Takayama again or Janeane Garofalo) tries to help her find herself and become the fully-fledged witch she longs to be.

As is probably clear in my synopsis, Kiki’s Delivery Service is very much a coming-of-age film, exploring the difficulties faced by a young girl on the cusp of becoming an adult. Miyazaki, who also wrote the film, only had sons, so was a bit wary about making a film about an adolescent girl. He ended up basing it on stories told by associate producer (and co-founder of Studio Ghibli) Toshio Suzuki about his daughter. 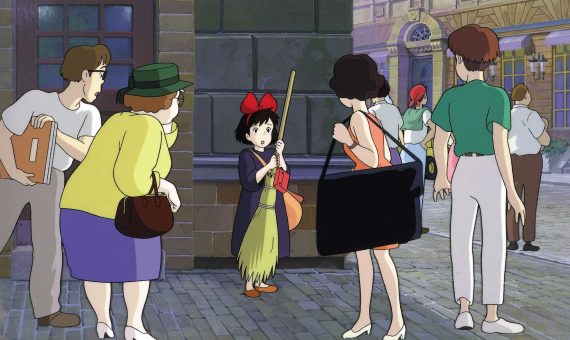 It’s a relatively low-key and warm-hearted spin on this theme too. A lot of coming-of-age films focus on sexual awaking and generally finding an interest in the opposite sex but, although there’s a hint of romance between Kiki and Tombo, instead Miyazaki wanted to make a movie about the self-doubt teenagers feel at that point in their lives. It’s handled very effectively too, offering a clear theme but with enough depth and sensitivity so as not to feel blunt.

The film is also refreshingly gentle, without the need for the constant action or hijinks you get in most animated family films. There a few mild thrills here and there, particularly in the satisfyingly dramatic finale, but for the most part things flow along quite peacefully. It’s perhaps a touch too long and leisurely paced for some children. Both my two young daughters (aged 3 and 6) got a bit fidgety, with the youngest, in particular, losing interest a bit as it went on. However, ever since watching the film a week ago they’ve been pretending to be Kiki (partnering up with other film and TV characters, most often the pink Power Ranger!) ‘flying’ around the house with our sweeping brush. So it certainly struck a chord and my eldest definitely enjoyed it. 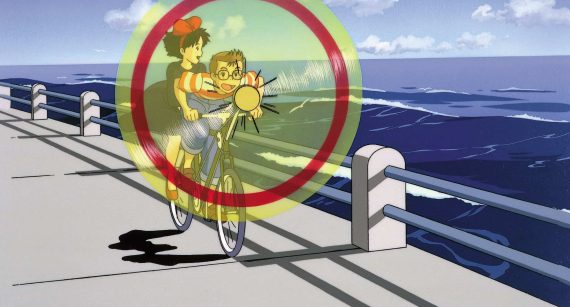 The magical side of the film is quite toned down too, compared to most stories about witches and wizards. Other than flying and being able to talk to Jiji, Kiki doesn’t do anything else particularly magic. Those expecting some sort of Harry Potter-esque adventure might be disappointed but I loved the way being a witch wasn’t made out to be a big deal. In fact, the other characters just accept it without question. Witches seem to be a common thing in the world and most towns and cities have one ‘witch in residence’. This sidelining of the fantastical elements means the core coming-of-age story is placed front and centre and you can focus on the protagonist rather than get distracted with tricks and spectacle.

As is to be expected from Ghibli, the film is beautifully made from a technical perspective. The character designs are common to most of Miyazaki’s work, but the animation and expression are exquisite and the backgrounds are elegantly painted with a keen eye for detail. The artistry and animation particularly shine in the flying sequences. When Kiki takes to the skies, the audience is brought up there with her. Alongside the sense of movement, perfectly capturing the effects of the wind, you’re treated to some beautiful views of the scenery. Blown up on a projector screen and remastered here for Blu-ray, these scenes are simply breathtaking.

So, Kiki’s Delivery Service’s more gentle approach might be the reason it hasn’t always been my favourite Ghibli film, but it’s hard not to fall in love with its beauty and sense of quiet wonder. It certainly gives a sweetly magical spin to the classic coming of age story and it still comes as highly recommended as all of Miyazaki’s films. 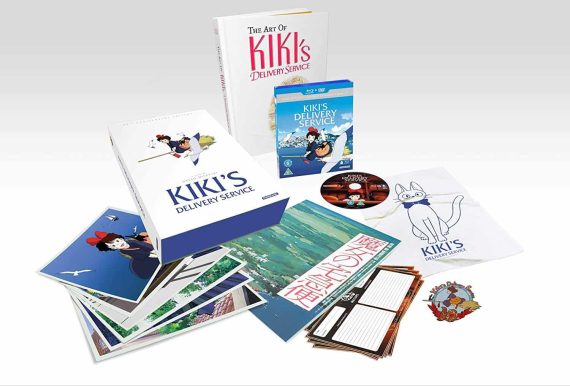 Kiki’s Delivery Service is being re-released by Studiocanal in a dual-format Blu-ray and DVD 30th Anniversary Edition on 16th December. The picture and audio quality are top-notch, and you get a choice of either watching in the original Japanese language or the English dub. As far as I’m aware the discs are the same as previously released, although you get plenty of goodies included in the package to make it worthwhile.

I didn’t receive any of the physical goodies from the Collector’s Edition, but from the description and images I’ve seen, it sounds to be a wonderful collector’s item. My kids were excited when I read out the contents to them.

As for the special features on the disc, which I did receive, they’re a little disappointing. The location featurette is the longest piece here (close to half an hour) and it has its moments but feels tenuously linked to the film until quite late on. About two-thirds of the way through we learn Miyazaki took much of his inspiration for the city of Koriko from the city of Visby in Sweden he visited when location scouting for a Pippi Longstocking adaptation. The featurette gets more interesting from then on but it’s a case of too little too late.

The piece on the English dub is OK but fairly lightweight. The other featurettes are very good, featuring interviews with Miyazaki and Toshio Suzuki, but they’re disappointingly short.

The storyboards are an impressive addition and will be of interest to budding artists and animators, though I doubt many average viewers will sit through the whole thing.

Fans of the film will probably be happy with all the physical extras you get though, with the 208-page book making up for a lack of any lengthy ‘making of’ documentaries. So it’ll still be well worth popping on your Christmas list.