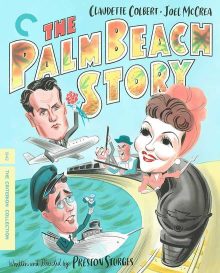 After finding great success on Broadway, Preston Sturges was approached by Paramount Studios. He worked as a Hollywood screenwriter throughout the 1930s but grew tired of the way directors would handle his material. So, in 1939 he sold the rights to his script for The Great McGinty for only $1 (later raised to $10 for legal reasons) on the agreement that he could direct the film. Paramount agreed, which helped paved the way for other writer-directors, such as Billy Wilder and John Huston, to make similar deals. The Great McGinty went on to be the first of an extraordinary run of classic films in only 5 years, which also included Christmas in July, The Lady Eve, Sullivan’s Travels, The Palm Beach Story, The Miracle of Morgan’s Creek and Hail the Conquering Hero. Although his later work often ran foul of the studios who interfered after his box office returns floundered, the quality of those aforementioned titles was strong enough to cement Sturges’ name in cinematic history as one of the great writer-directors of romantic and screwball comedies, alongside big names such as Ernst Lubitsch and Howard Hawks.

The Criterion Collection have added one of these films to their illustrious collection in the UK, with The Palm Beach Story getting their special treatment this November. I love a good screwball comedy and adore Sullivan’s Travels (embarrassingly the only Sturges film I’d seen prior to this) so thought I’d give it a look.

After a madcap and puzzling opening credits sequence in which Tom (Joel McCrea) and Gerri (Claudette Colbert) Jeffers are married, The Palm Beach Story flashes forward several years to find them broke and considering divorce. It’s a fairly amicable idea though, in Gerri’s mind at least, as she believes they’ll be better off if they acted like siblings and she used her sex appeal to snag a rich new husband, then got him to pay for Tom’s crazy inventions (primarily his wire-mesh airfield designed to hang above a city to save space). This way they’d both be getting what they need (she has expensive tastes in clothes and jewellery) so would be happy, even if they’re not legally together anymore. 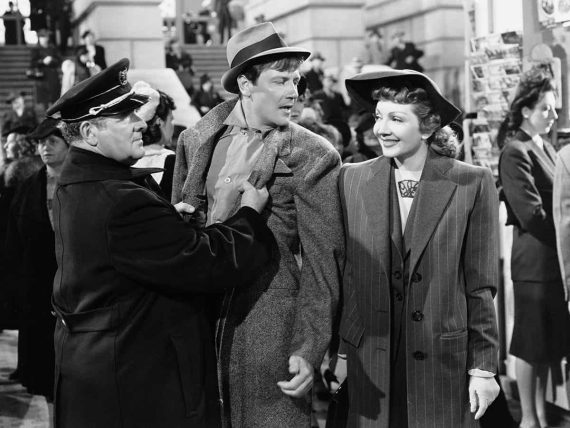 Tom isn’t quite as keen on this idea, so tries his best to stop Gerri leaving when she heads off to Palm Beach to get a quickie divorce. He fails and she sweet-talks her way onboard a train headed for Florida. There she meets the immensely rich J.D. Hackensacker III (Rudy Vallee), who takes a shine to her and invites her to complete her journey to Palm Beach on his yacht. Gerri sees this as a chance to act out her great plan, so strings him along, whilst Tom catches a plane to try to get her back before it’s too late.

Unlike the carefully constructed romantic comedies of writers like Billy Wilder and Ernst Lubitsch, The Palm Beach Story, like much of Sturges’ work, is wild and chaotic. Characters and scenes are thrown in with complete disregard as to how they fit into the ‘bigger picture’. Even the strange events of the opening credits (which see a tied up Claudette Colbert trapped in a cupboard whilst another Claudette Colbert rushes off to get married) are never fully explained.

This might often be seen as a criticism for a film, but Sturges gets away with it. In fact, it’s one of the things that makes his films so enjoyable. He adds elements that may be superfluous in terms of plot but are indispensable as entertainment. He has a great eye and ear for quirky characters in particular. From the wildly drunk and careless members of the Ale and Quail Club (complete with howling hounds) to the overly-generous and deaf-as-a-post Wienie King (Robert Dudley), to the unintelligible lapdog Toto (Sig Arno), the film is stuffed to the gills with memorable side characters. Spending more time on them than is necessary for the plot, purely because the characters are fun to watch, is a technique the Coen brothers have also effectively employed for much of their career. They’re clearly fans of the director, as they named their O Brother, Where Art Thou? after the film-within-a-film in Sturges’ Sullivan’s Travels. 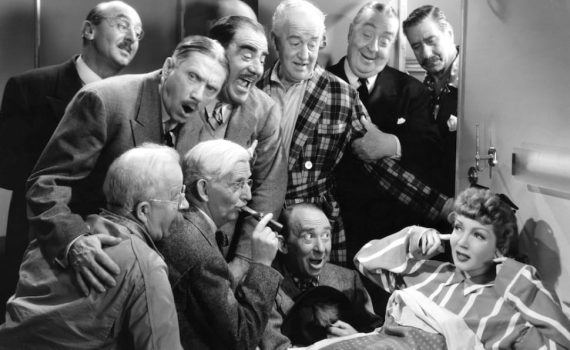 The principal cast are no slouches either, particularly the female members. Colbert is full of energy and incredibly lovable and Mary Astor, who plays Hackensacker’s sister, the Princess Centimillia, takes fast-talking to another level. She steals the show whenever on screen. Vallee is fun to watch too, as the stiff-as-a-board but strangely likeable billionaire. I was less of a fan of McCrea here though and his character provided my only gripe with the film. I found Tom too abrasive and controlling (well, wannabe-controlling) with Gerri to accept that she’d go to such bizarre lengths to make him happy. His almost quite nasty character took some of the charm from the film for me, it must be said.

However, this was not enough to stop me thoroughly enjoying the film as a whole. It’s still laugh-out-loud funny, with Sturges’ razor-sharp, machine-gun dialogue delivering the goods alongside some effective physical comedy. Some of Arno’s falls and contortions are particularly well-executed. One practically had my jaw-drop it looked so painful.

Overall then, it’s a fast-talking and consistently hilarious screwball comedy from one of the greats of the genre. It doesn’t quite have the charm of some better examples, due to a central relationship I didn’t buy into (though you could argue it’s supposed to be troubled). However, with a hugely enjoyable cast of characters, some fine rat-a-tat-tat dialogue and winning performances, it’s hard not to enjoy.

The Palm Beach Story is out on 11th November on Blu-Ray in the UK, released by The Criterion Collection. It looks and sounds great, as is to be expected from the label.

It’s not a great deal of extra material, but the James Harvey and Bill Hader pieces are both very good, helping better appreciate the film’s qualities and offering interesting background information about the production and Sturges in general.

The ‘Safeguarding Military Information’ short is a surprisingly serious turn from Sturges, though subtle similarities between his usual work can be found in the banter between characters on screen. The radio adaptation is fine, though I can usually take or leave these when they crop up. It’s interesting to hear a different cast tackle similar material though, I guess.