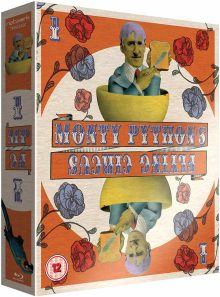 I, like many others my age (late 30s) and younger, know the Monty Python team best for their films. Life of Brian and Holy Grail, in particular, are cult classics much beloved by anyone with a taste for the Monty Python brand of humour. With the popularity of these films, it’s easy to forget that Graham Chapman, Eric Idle, Terry Jones, Michael Palin, John Cleese and Terry Gilliam originally made great waves on TV with the Monty Python’s Flying Circus series. The team had worked together before in smaller factions on a couple of other comedy series, namely Do Not Adjust Your Set and At Last the 1948 Show (both recently re-released by the BFI), but it was when they all combined their efforts to create Monty Python that they really took the world by storm. After the TV series came various tours, albums, books, musicals, games and, of course, the films. Their troupe and most members became household names and the influence Monty Python has had on other comedy writers and performers in the following years/decades is immeasurable.

But how does that original series stand up now? I must admit, I’d never watched much of it before, despite considering myself a Python fan. However, my original introduction to Monty Python was And Now For Something Completely Different, which was an anthology of sketches from the first two series, re-enacted and shot for film. I had it on VHS and watched it dozens of times as a teenager, so a good number of the classic sketches were deeply etched in my subconscious. Therefore I wasn’t completely new to Flying Circus and recognised a good deal of the first series, which is what I’m reviewing here in the form of Network’s newly remastered Blu-ray collection (full details at the bottom of the page). 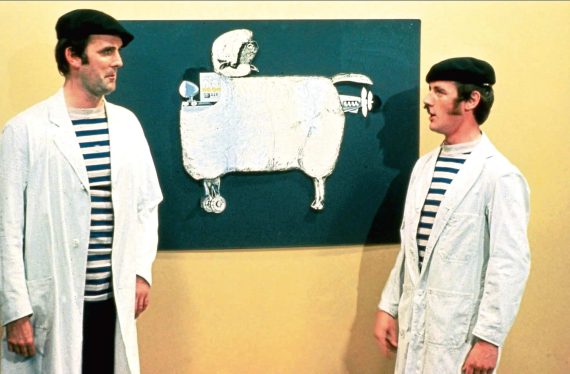 The short answer to my question (which got lost among my waffling on) as to whether or not Monty Python’s Flying Circus still stands up today is a resounding yes. From episode one, we’re treated to classic sketches, such as the ‘funniest joke in the world’, and they’re fired out at quite a pace. As with any sketch-based comedy, not every scene is going to be gold, but there are far more hits than misses here and the series still has the power to make you laugh out loud, fifty years on.

How Monty Python always excelled was in being very clever at being very silly. What might seem like daft, madcap nonsense with the performers dressing in drag and hitting each other with dead chickens, has plenty of satire lurking not far under the surface. Alongside the absurd surreal humour, it skewers modern culture, particularly TV of the era in lampooning high culture arts shows, TV news and adverts. In general, the series likes taking British institutions and high culture down a notch. This can even be seen in Gilliam’s anarchic and cheeky animating of classic works of art.

There’s also a post-modern approach to much of the material, with plenty of fourth-wall breaking. Characters occasionally comment on the quality of punchlines given for instance and we get frequent spoof complaint letters from ‘viewers’ who are offended by material in the programme (I wonder if these were inspired by any issues the team faced with previous series they’d worked on). 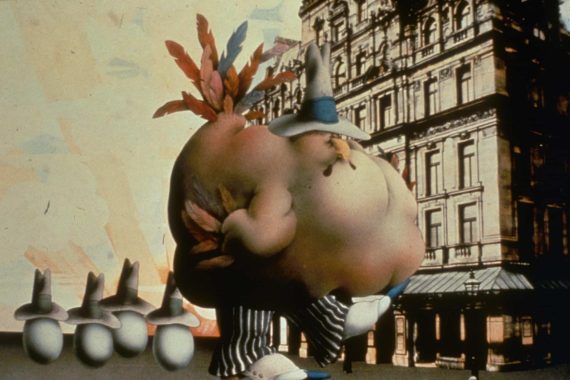 Flying Circus also takes great pleasure in subverting expectations, with a few sketches seeming to be taking a tired, broad approach then putting a spin on it at the end. The milkman being enticed into a scantily-clad lady’s house before getting locked up in a room full of milkmen, for instance. The opening sequences to each episode also demonstrate this subversion of expectations. These always feature Michael Palin as a shabby-looking old man who takes a long, drawn-out, often dangerous route to being on-camera before merely saying “it’s…” (which was originally considered as the title for the series).

Episode 7, aptly titled ‘You’re No Fun Anymore’, is the only episode I felt fell a little flat. It’s the only one that centres around a single ‘story’ for almost the entire episode, a sci-fi movie spoof where everyone in Britain has turned Scottish. The episode feels drawn out due to this narrower focus and doesn’t feel as wildly surreal as the rest of the series either. It still has effectively funny scenes though and things get straight back on track with episode 8, which contains possibly the most famous Python sketch of all, the ‘dead parrot’ sketch.

The performances are a vital part of the series’ success too. Each of the team has their own strengths and they make sure to cast the many characters appropriately. The actors each have a few ‘stock characters’ they re-use, but they still have a huge range to work on through the sketches and episodes.

The only criticism anyone might have when re-assessing Flying Circus in the modern age, is in some of the cultural representation on screen. The team do depict quite a few racial, sexual and cultural stereotypes that wouldn’t pass muster on TV these days. However, I’d argue the spoofing rarely feels malicious and such a wide array of stereotypes are made fun of, covering class and gender too, that few areas of society are left unblemished, leading to a fairly equal level of piss-takery.

It’s hard to get caught up in any questions of taste or offence though when sitting back to enjoy the wildly surreal mayhem expertly devised by the Python team. It’s still pretty bonkers now, so I couldn’t imagine what it must have been like back in ’69 when it first hit TV screens in the UK. If, like me, you’ve only ever seen the Monty Python films but loved them, you owe it to yourself to get hold of this newly remastered set and experience the inimitable charms of the group’s original breakthrough.

Monty Python’s Flying Circus: The Complete Series 1 is out now in DigiPak + Standard Blu-ray and DVD box sets, released by Network, as well as the ‘Norwegian Blu-ray Edition’, which includes all four series in a beautifully designed exploding box. Individual sets of the other series will be gradually released through the first half of 2020. The Blu-ray sets are all region free (I’m not sure about the DVDs) and have been painstakingly restored too. It must be noted though, on the Series 1 set I watched at least, the picture quality varies depending on how each scene was shot. Terry Gilliam’s animations and most of the location-shot skits look great, particularly the animations, but the studio-bound sequences have a few issues, with a less detailed look and the occasional ‘ghosting’ you often get on TV series of that era. This is due to the varied stock used, including standard definition sources that had to be upscaled, so it was never going to look immaculately sharp from beginning to end. The series still looks a hell of a lot better than most re-released BBC series of the 60s and 70s, including previous releases of Flying Circus.

Here’s a breakdown of the full ‘Norwegian’ set’s selling points and special features (the individual series are as they are in the full set): 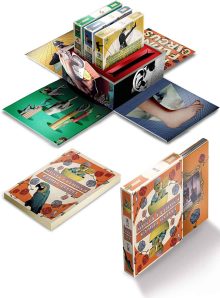 As you can see, Series 1, which I chose to review (I didn’t have time to get through them all), is pretty light on special features, unfortunately, though the extended skits and outtakes are worth a watch. It’s a shame there aren’t any interviews or commentaries as I’d have liked to find out more about the show’s inception and production. There are some interviews in other sets, though I can’t comment on how long or informative they are.

If you’re a Python fan though, this is a no-brainer. The series has never looked this good and with all the ‘missing bits’ reinstated it’s as complete as it ever has been too. You’d have to be an ‘ex-parrot’ not to want this on your Christmas list.