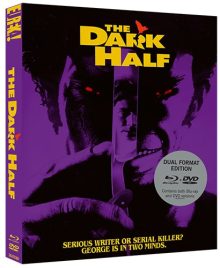 It’s been a good year for Stephen King fans. Not only has the author published a new book, The Institute, we’ve seen new adaptations of IT and Pet Sematary, there’s an upcoming film of his Shining sequel, Doctor Sleep, hitting cinema’s; even Netflix are getting in on the game, mining his more obscure material with In The Tall Grass following 2017’s Gerald’s Game.

One of the undisputed masters of the horror genre, King’s work has been somewhat patchily adapted over the years. For every Shining there’s a Maximum Overdrive. For every Carrie, a Children of the Corn. The lest said about the likes of The Langoliers and The Lawnmower Man, the better. But that’s not to say that some of the older King back catalogue hasn’t turned up some films that are worth your time – thankfully The Dark Half is one of them.

Directed by the late genre virtuoso, George A. Romero, The Dark Half was one of only two films the Night of the Living Dead director put out in the 90’s, the other being a segment of his Two Evil Eyes collaboration with Dario Argento. The Dark Half is certainly an interesting film and captures that American Gothic feel of King’s 80’s and 90’s output, being part of his Castle Rock cycle alongside the likes of The Dead Zone and Cujo. 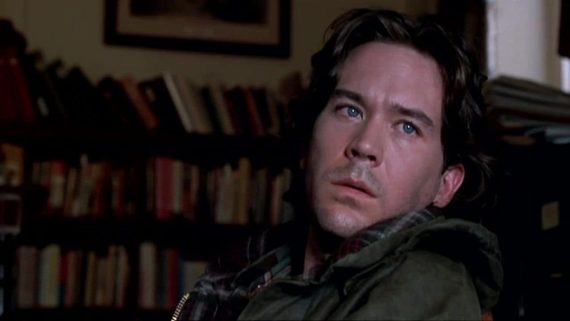 Thad Beumont (Hutton) is an author and university lecturer. While his highbrow literature is well recognised, it is always outsold by the crime novels he publishes under a pseudonym, George Stark. When an investigative reporter threatens to expose him, Thad goes public and “kills” the George Stark name to allow focus on his own career. But as people close to Stark’s novels begin to get murdered in horrible ways, all evidence points to Beaumont as the main suspect. Thad believes differently, however – that George Stark has been given life and is out for revenge. With the help of Castle Rock Sheriff Alan Pangborn (Rooker) he seeks to clear his name and protect his family from his dark half.

The Dark Half is certainly one of the more interesting stories in King’s bibliography, being somewhat self referential. For a time he secretly published under the pseudonym Richard Bachman and was himself “found out” by an individual, in this case a bookstore owner, and decided to retire the Bachman name. Stephen King’s work is notoriously complex, especially in the way it has built up layers of self reference and interconnectivity over the years, and The Dark Half is no exception. Fortunately Romero does what all good adaptations should, and cuts to the core of the story, extracting the essence and distilling it into a coherent film.

That’s not to say it’s not a problematic piece. The story suffers early on from chopping between locations, from Thad’s hometown of Castle Rock, to his current house in Ludlow, diverting to New York where his publishing team is based, it’s not always clear where the action is taking place which can be a little disorientating. The end of the film is also a little abrupt, offering little resolution to the story beyond an admittedly bombastic finale which we’ll come to in a moment, however this is likely to work around the downbeat and ambiguous ending from the book. 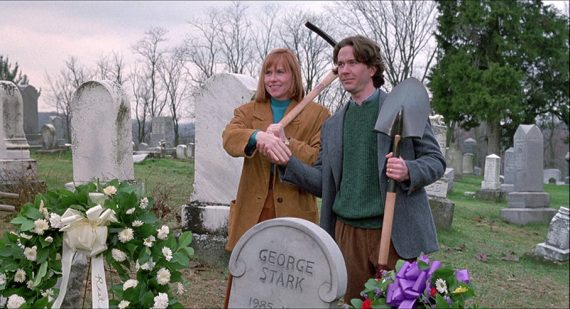 The performances are great here, however, and Timothy Hutton absolutely eats up the scenery in the dual role of Thad Beaumont and George Stark, the former being a clean cut but clearly troubled family man, the latter being a raging psychopath. Michael Rooker is also excellent value as Alan Pangborn, a role that would also be played in the same year by Ed Harris in an adaptation of The Dark Half’s follow up novel, Needful Things. For my money, Harris is the better Pangborn, but Rooker’s uncharacteristically restrained performance is a very close second, showing a side to the actor that we rarely see.

Romero’s touch is clear here and the film frequently oozes atmosphere, from the autumnal cemetery shots close to the beginning, to the luridly sadistic attacks from Stark. There’s also a thread of the surreal that trickles through, particularly in Thad’s dream sequence towards the middle of the film, but also in the way Romero shoots the aftermath of violence, full of silhouettes and suggested brutality. This is supported by a brilliant and creepy score by veteran horror composer Christopher Young, full of doom and foreboding, it’s the kind of orchestral score you don’t seem to get these days.

Credit as well needs to go to the effects team on this film; there’s some excellent makeup and prosthetic work at play here. Not only do we get some particularly nasty wounds, the decaying visage of George Stark is also brilliantly realised, all pustules and rotting flesh, while the opening scene portraying a horrible bit of brain surgery is genuinely unsettling. Then there’s that previously mentioned finale which is a superbly grand guignol set piece realised through some truly visceral practical effects coupled with some clever visual effects to replicate the films ongoing motif of a flock of sparrows accompanying George Stark’s appearances. The photography and special effects used to place Hutton on screen with himself in both roles, while not entirely perfect given the age of the film, is also smart and creative. 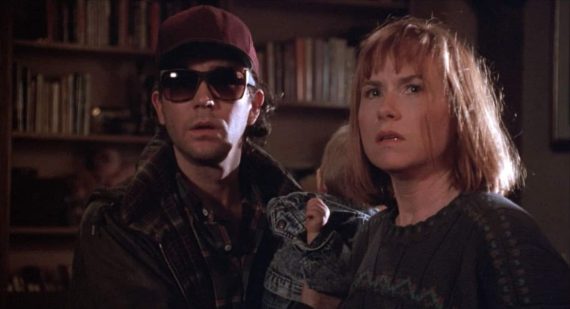 This Blu Ray release is a great way to watch the film, with a crisp image that isn’t entirely clean, retaining some of the grain from the original negative as well as the occasional dirt and scratch. This is particularly noticeable in one or two darker shots, where the grain really comes to the fore, but it does compliment the bleak photography as a whole. Audio is also clean and clear throughout although dialogue can sometimes dip into quiet territories.

Overall The Dark Half is a very good, if somewhat uneven, Stephen King adaptation and a great example of 90’s horror. Sure, it strays a little too far into standard slasher territory at times, but the combination performances, effects, sountreack and splashes of “weird” make it well worth your time.

This Blu-Ray release from Eureka features a decent selection of bonus features focussing largely on the late George A. Romero. For fans of the horror maestro’s work, they’re definitely worth checking out.