Somehow, despite being greedier than ever this year for screeners, I’m managing to keep on top of my Cracking the Collection challenge. It does mean I do nothing but watch films in my spare time, but there are worse things I could be doing 🙂 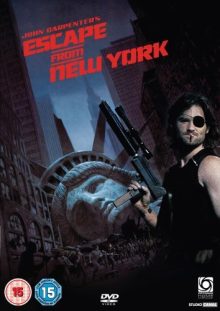 I cheated a bit when I included this in my list of options for the challenge as I was originally sticking to films I’d never seen before, but I have actually seen Escape From New York once when I was young. It’s been such a long time though that I couldn’t remember anything about it and I’m such a big fan of John Carpenter (pre-90’s at least, bar one or two exceptions), I was desperately keen to give it a rewatch. Luckily three of you picked it to quell my urge and it didn’t disappoint. Once again, Carpenter crafts a taught, incredibly cinematic and hugely enjoyable genre movie. Kurt Russell is his charismatic bad-ass best as Snake Plissken, delivering each wise-crack and put down like no one else. He shares the screen with several cinematic legends too, such as Lee Van Cleef, Ernest Borgnine, Donald Pleasence, Isaac Hayes, Harry Dean Stanton and Tom Atkins, who all deliver the goods. Carpenter’s soundtrack is as cool and memorable as always too. The film is darker than I remembered though. I think I had memories of the zanier Big Trouble in Little China in my head before this rewatch, so I was surprised to see the bleak future world displayed here. Carpenter does a great job of it, making the most of his modest budget to create a fairly believable setting for the film, even in its more ridiculous moments. I don’t think it stands up quite as well as a couple of my favourite Carpenter films, which is why I’ve not given it the full 5 stars, but like a lot of the director’s work, a couple of rewatches will only make me love it more. 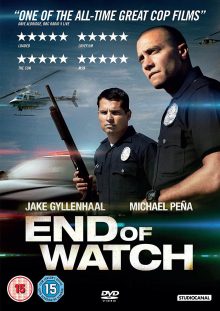 This police thriller, shot in a documentary style, has its problems, but at the same time I really enjoyed it. The documentary presentation is all over the place, with some sections made out to be shot by the characters themselves, but others using mystery cameras which break the ‘found footage’ format the film makes great efforts to establish at the start. Stuff like that often bothers me, but I forgave the film as the style gave it a nice raw energy. It’s a fast moving, intense and brutal film that grips despite being rather overblown for something presenting itself as ‘real’. I know police officers have to deal with some horrific stuff on a regular basis, but these two seem to be involved in a lot of really extreme situations in a short period of time and the side stories are terribly cliched. The ending annoyed me a little too, but I won’t go into it for fear of spoilers. It’s got a great cast though and they’re all on decent form and have a strong chemistry, particularly the two leads, Jake Gyllenhaal and Michael Peña. So, all in all, it’s a little rough around the edges, but remains an exhilarating watch with a talented director and performers helping raise the generic source material to another level. 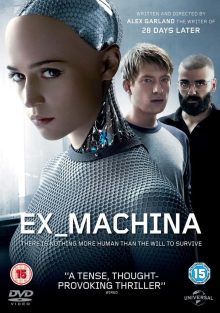 Ex Machina was a film a lot of people were raving about in 2015, so I was keen to see it. Blueprint: Review’s Darren Bolton was less keen about it though, so my expectations were curbed a little after hearing him bash it. I’m not a fan of Domhnall Gleeson either. In my opinion he ruined Frank and was the only weak link in the new Star Wars cast. However, I found myself thankfully in the pro Ex Machina camp. It’s refreshing to see a small, intimate sci-fi film rather than the bombastic fare we usually get in the multiplexes. Despite the small cast and enclosed setting, the film remains gripping and has its share of thrills along the way. There’s plenty of food for thought to chew on too. It’s not saying anything new perhaps that wasn’t covered in the writing of Isaac Asimov or similar, but it’s certainly thought provoking. And I thought Domhnall Gleeson did a decent job for once too, so all is good!

Up next in June: