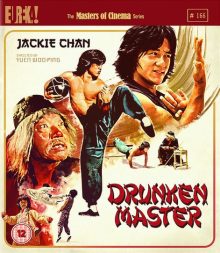 Regular readers will know I love martial arts movies. My interest in the genre began back when I was a kid and I saw a cut version of Enter the Dragon on TV (nunchucks weren’t allowed to be shown in films/TV in the UK back then). I was already a fan of action movies, but the athleticism of the hand to hand combat blew me away. For some reason though (possibly because at the time I watched nothing but obvious classics and anything that got 5 stars in mainstream magazines like Empire) I didn’t think to delve further into the genre to find more titles that elicited such excitement. When I was 17 though, The Matrix came out and once again I found myself amazed by martial arts on film and not long after I finally picked up an old classic of the genre, Drunken Master. Well, as much as I enjoyed the other two films I mentioned, Drunken Master truly made my jaw drop. From then on there was no satiating my appetite for kung-fu movies and there still isn’t. It truly opened the doors to classic kung fu films for me and the film will always hold a special place in my heart because of it. Plus, few martial arts movies have bettered it in terms of action these near 40 years on. So, of course when Eureka announced Drunken Master was to be added to their prestigious Masters of Cinema label, I practically jumped for joy.

The film’s lead character, played by the incomparable Jackie Chan, is the Chinese folk hero Wong Fei-Hung. Still an arrogant teenager, his martial arts skills are pretty good, but he’s not quite the master he is set to become in later years and wastes his talents on goofing around, picking street fights and making unwanted advances on young women. After getting into trouble one too many times, his father Kei-Ying (Kau Lam) sends him away to be set straight by his uncle, who’s nicknamed Beggar So (Siu Tin Yuen). This master of the 8-Drunken Genii kung-fu is notorious for crippling his students, so Fei-Hung tries his best to escape, but ends up having to endure So’s brutal training regime. When both of them are humiliated though and Fei-Hung discovers the true strength of drunken boxing, the young master must prove himself against the highly skilled assassin Yim Tit-sam (Jang Lee Hwang).

The story is certainly nothing to write home about and serves little more than a frame to hang dozens of fight sequences. The film’s narrative structure is quite influential and many kung-fu films have copied it since, but lets not kid ourselves, the writing is pretty basic and the film is rather ramshackle in many aspects. Woo-Ping Yuen was, and still is, one of the best fight choreographers in the world, but he’s never been the greatest director. In keeping things stripped back and simple with regards to script and direction though, Yuen lets the film’s two leading proponents shine bright – the action choreography and the star Jackie Chan.

Chan had made a lot of films prior to this, but he hadn’t quite broken out as a true star and was still considered one of the many Bruce Lee clones being churned out of Hong Kong. Snake in the Eagle’s Shadow, which was released in the same year as Drunken Master, was a turning point, proving popular with audiences, but it was the latter film that knocked down the door to fame for the young actor. It’s easy to see why too. Snake in the Eagle’s Shadow had some humour, but in Drunken Master, the first true kung-fu comedy was born and Jackie Chan was sure as hell the best person to pull it off. A known fan of Buster Keaton and the like, Chan knew how to pull off daringly acrobatic physical comedy and had the skills to do it like no one else before him or since. From this early age, he already had the natural charm and charisma that has made him a household name around the world. Yes, much of the humour is slapstick and lowbrow, but Chan makes it work and the film remains an enjoyable watch all these years on.

It’s the action that brings me back after multiple viewings though. Yuen, Chan and the rest of the fight team pull out all the stops to deliver some of the most wildly fast and mind-bogglingly elaborate fight scenes ever seen. It’s not all saved for the final fight either. Drunken Master, unlike a lot of more recent martial arts films, is pretty much wall to wall action. This relentless fighting could get tedious, but the choreography is so endlessly inventive and skilful, it’s an absolute joy to watch. Martial arts movies are often compared to musicals and this is a prime example of the comparison. Most Hollywood musicals have flimsy storylines and uninspired characters, but you enjoy them because of the catchy musical numbers and elaborate dance sequences. This is no different, but instead of being mesmerised by Gene Kelly’s fancy footwork, you’re entranced by the ducking and diving exploits of Chan and Jang Lee Hwang.

As such, those who aren’t interested in martial arts films won’t get a lot from Drunken Master, but for anyone else with even the slightest inclination towards action films, this is pure bliss. With near endless fight scenes of the highest calibre, performed with tremendous energy and athleticism, it’s a thrilling experience. Chan was bound for stardom after this. He makes a very basic story and character utterly captivating through sheer charm and mind-boggling physicality. Yuen’s jaw dropping choreography is equally, if not more important here too (although I imagine Chan helped develop much of it). The film is the reason I became obsessed with martial arts films and still impresses almost 20 years after I first saw it, despite watching hundreds more kung-fu movies since. I couldn’t recommend it enough.

Drunken Master is out on 24th April on Dual Format DVD & Blu-Ray in the UK, released by Eureka as part of their Masters of Cinema series. The picture and audio quality is excellent, restoring the original aspect ratio which wasn’t used in previous UK DVD releases. Multiple audio options are included too.

There are plenty of special features. These include:

It’s a fantastic set of special features. The commentary is a must listen, with the two experts full of passion for the film and genre. Tony Rayns provides his usual in-depth look at the background of the film and some analysis. Gareth Evans is clearly a fan and it’s nice to have his thoughts added to the collection. It’s always great to hear the ever humble Jackie talk about his career too. The Woo-Ping Yuen interview is rather rough around the edges, but is also welcome.

I always thought I was happy with the old Hong Kong Legends DVD I held onto so dearly, but this wonderful restoration and bundle of extras has opened my eyes. I’m forever in Eureka’s debt for giving this personal favourite of mine the treatment it deserves and all credit to them for giving it the mantle of Masters of Cinema, when many snootier critics would label it a lowly B-movie. Here’s hoping they delve further into the genre. I’d throw in a suggestion of Magnificent Butcher.