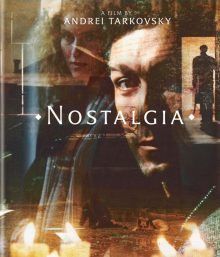 I’m approaching the end of my Tarkovsky marathon. There’s still one to go (The Sacrifice) and I’m running out of ideas for my opening paragraphs. I’ll sum up my journey at the end of the month when I tackle Tarkovsky’s final film, so all I can say about my approach to Nostalgia is that, after working through most of the rest of the director’s oeuvre these past two months, I’ve come to expect a slow, thoughtful, dreamlike style with striking visuals. Nostalgia (a.k.a. Nostalghia) is no different, although I felt it worked better and worse than the other titles in various aspects.

Now, I won’t lie, and this is going to add to some of my comments on previous Tarkovsky reviews that suggest I’m not up to film-buff scratch to be reviewing such lofty titles, but I had to look the film up to put together a short synopsis. It’s not a complicated film, by any means. Scenes and on-screen activity are rather minimal, but, possibly due to writing notes during a key bit of exposition or simply being far too tired to take it all in as usual, I managed to miss the film’s setup and some of the later details were a bit sketchy. From what I gathered afterwards, the film’s protagonist, Russian poet Andrei Gorchakov (Oleg Yankovskiy) is visiting Italy with a guide/interpreter Eugenia (Domiziana Giordano) to research the life of an 18th century Russian composer who had killed himself (this aspect of why he was there is what I missed). In a small rural town he comes across a seemingly crazy man called Domenico (Erland Josephson), who is famous (or rather infamous) for having imprisoned his family in their house for seven years for fear of impending apocalypse. Andrei is strangely drawn to this man, sensing a link between them. Andrei’s dreams of his home and family that he deeply misses become intertwined with dreams of Domenico’s past and when the older man gives the Russian an unusual task he feels duty bound to carry it out. 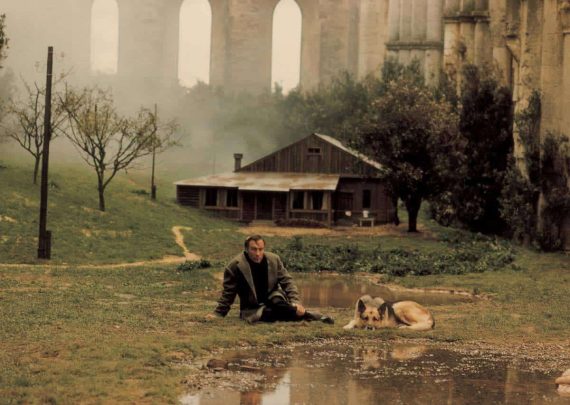 This is going to be an odd one to review as I was wildly torn between feelings on its style and substance. From a surface perspective, it’s the best of Tarkovsky’s films I’ve seen. The film looks utterly stunning. I’d go as far as to say it’s one of the most beautifully shot films I’ve ever seen, along with The Conformist. Tarkovsky’s composition is as painstakingly perfect as ever and his long, fluid takes are a pleasure to behold. The lighting here is particularly breathtaking too, utilising strong shadows alongside some gorgeously soft, muted colours. He makes fantastic use of locations, with fog/mist frequently flooding the frame amongst the decaying ancient ruins of former Italian decadence. Tarkovsky’s fascination with water inside buildings appears again too, in a memorable sequence where Andrei visits Domenico’s crumbling home.

So it’s positively mind-blowing in terms of visuals and its minimal use of sound and music is striking too. However, where I found most of the previous Tarkovsky films enigmatic but nonetheless fascinating, I struggled to find elements of the content to hold on to here. I found myself a bit lost as to its themes or messages. As mentioned, I was tired watching it, so perhaps a fresh-minded re-watch would uncover its mysteries. All of the Tarkovsky films I’ve watched would greatly benefit from a re-visit I imagine, but I struggled to connect with this on first viewing even more than before. The director’s go-to themes of faith and the troubled lives of artists are present, but they didn’t engage me. The film also examines life as an outsider though, with Andrei not connecting to Italy and longing for home, and Domenico struggling to be accepted by those around him who think he’s mad. These aspects are clearer to see and were more effective. 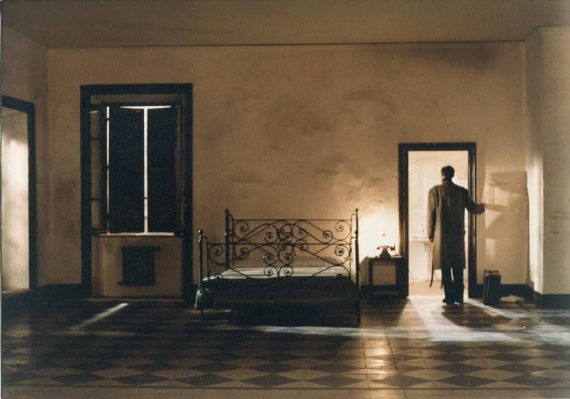 So, like most of Tarkovsky’s films I’ve reviewed, but perhaps to a higher degree, Nostalgia blew me away in terms of cinematic craft, but left me a little baffled in terms of content. Baffled is maybe too strong a word as I wasn’t necessarily confused, I just couldn’t quite see the point being made and didn’t find it as thought-provoking as previous films. Nevertheless, when a film is this beautifully made I can’t be too hard on it, plus I get the feeling my struggles were due to a mixture of slow-wits and lack of concentration. So I’d still recommend the film, if only to witness how incredible it looks.

Nostalgia is out on 12th September on Blu-Ray and DVD in the UK, released by Curzon Artificial Eye. I saw the DVD version and the picture quality is very good. It’s a clean picture, perhaps a bit soft, but that’s likely just my HD spoilt eyes.

As before the DVD I saw is bare-bones, but the Blu-Ray contains the following features: