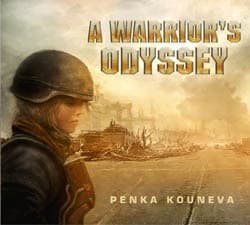 I almost passed on this one, I thought it was just the soundtrack to a computer game I hadn’t heard of and was from a composer I knew nothing about, but I’m glad I didn’t. It’s actually a cinematically inspired orchestral album that takes its inspiration from military-focussed films and video games. To quote the album’s website, it’s “a musical odyssey inspired by the traditions of film music and contemporary video games using a conceptual narrative rather than visuals.”

Composer Penka Kouneva is a rising star in Hollywood’s compositional landscape, but probably her most well known work has been in her collaborations with composer Steve Jablonsky on video game scores including Prince of Persia: The Forgotten Sands, Transformers: Revenge of the Fallen and Gears of War 3.

The music here is intense and exciting, taking most of its inspiration from modern action scores. With a lush, orchestral sound, making use of actual live recordings rather than digital composition, this is a rousing and powerful listen. There is a Middle Eastern feel to much of it too, obviously Kouneva had the conflicts over there in mind when she wrote this music and indeed during November and December, half of the proceeds from all sales for A Warrior’s Odyssey during the months of November and December 2012 were donated to Hope For The Warriors ®.

With its strong rhythmic undercurrent and various dramatic passages, this is an exhilarating listen, but it also contains a number of quieter moments which keep things from getting repetitive and help add to the numerous reasons why I’d heartily recommend lovers of action and video game scores check this out as soon as possible.

A Warrior’s Odyssey is out now on CD and digital download.

To buy the soundtrack on CD in the US head over to Amazon.

If you’re in the UK use this link for the digital version. 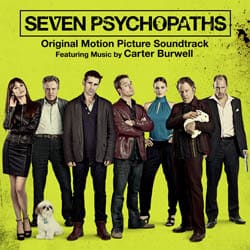 Seven Psychopaths is a film I missed when it hit cinemas in the UK back in early December, but I would like to see it. Although it has a few detractors it looks like fun, with an excellent cast to back it up. In the meantime I’ll have to make do with the soundtrack.

On paper this soundtrack really shouldn’t work. With the classic country stylings of Hank Williams and alt-country musings of Josh T. Pearson rubbing shoulders with the modern indie-rock of The Walkmen, a couple of operatic tracks and an original score by Carter Burwell this should be a big mess. Yes, the soundtrack is a bit all over the place, but you know what, so is my taste in music and this album is full to the brim with music that I love.

Carter Burwell’s score is slotted here and there in between the pre-existing tracks for the first half of the album, then takes over the latter half. It has that Coen Brothers sound to it at times, bringing to mind the scores Burwell composed for Fargo and Miller’s Crossing. To me this is great as those are two scores I adore and it’s more a sign of Burwell being an auteur with a signature sound rather than being a lazy imitation of what has come before. OK, so it lacks the memorable themes of those soundtracks I mentioned, but the score is still well worth a listen.

As for the other tracks on the album they’re a wonderful mix of new and old with some stirring operatic/classical cues and great picks from The Walkmen and Josh T. Pearson, two artists I like quite a lot. Added to this are a couple of classic numbers from Hank Williams and P.P. Arnold (covering Cat Stevens) which help complete this effectively diverse collection of great tunes.

Seven Psychopaths Original Soundtrack is out now on CD and digital download.

To buy the soundtrack in the US head over to Amazon.

If you’re in the UK use this link to import the CD version.

Film Noir’s Finest: Themes From the Dark Side of the Lens 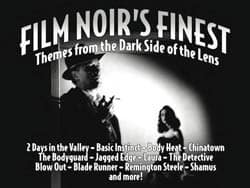 Like the Jerry Goldsmith Collection I reviewed previously, Film Noir’s Finest is another compilation that I had high hopes for but was a little disappointed by.

I love film noir in all its forms – the style, the mood, the sexy hard edge to it. As well as having a distinctive look with low key lighting and the like, film noir has a certain sound to it. Using late night jazz tropes mixed with moody orchestral flourishes there is a characteristic film noir musicality which I’m quite fond of, so I was very excited by this compilation.

Although the noir sound is here, the choice of tracks was what really disappointed me though. Rather than mine the hordes of original film noir soundtracks from back in the 40’s and 50’s which I was keen to discover, the collection is largely made up of neo-noirs from the 80’s and 90’s. Perhaps not much remains of the scores to the classic titles, with most noirs relegated to B-movie status at the time, but I was devastated to discover that the album was largely made up of imitation material.

That’s not to say these tracks are poor though. Although these are imitations of the old noir sound, in the hands of great composers such as Jerry Goldsmith, John Barry and Henry Mancini, these become love-letters to the genre with an added spin from each of the artists. There are a couple of classic, well known tracks such as the theme from Chinatown, one of my all time favourites, and the Love Theme from Blade Runner. As great as these are, they show up on so many albums I’m that bothered about their inclusion. What I did like though was discovering some surprises. The solo piano take on the theme from Physical Evidence for instance is beautiful as are a couple of the other solo pieces and the excellent theme from Eastern Promises by Howard Shore is equally as impressive. I’ve always been a fan of the subtly moody score for Dirty Harry too.

Some of the 80’s tracks such as the themes from Body Heat and Remington Steele have dated badly though with a synthy, cheesy jazz-band sound. All of the tracks are re-recordings too which are generally well produced, but I prefer to listen to originals when possible, unless something new is being brought to the table.

So I still struggle to shake off my disappointment at the real classics being largely left out (other than literally one or two tracks) as well as the fact that these aren’t original recordings, but after a few listens the album has grown on me and the lesser known gems have shone through.

Film Noir’s Finest: Themes From the Dark Side of the Lens is out now on digital download.

To buy the soundtrack in the US head over to iTunes.