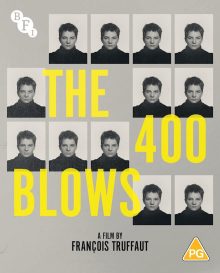 What film could be considered the first of the French New Wave is debatable. Coming after some early titles that are considered influences more than part of the movement itself, one contender is Agnès Varda’s La Pointe Courte which was completed in 1955. However, this wasn’t commercially released until 2008 and she’s considered part of the ‘Left Bank’ rather than the core of the New Wave. The first ‘proper’ film of the movement then is often thought to be Claude Chabrol’s Le Beau Serge, released in 1958.

Though Chabrol’s film is highly regarded, it could be argued, however, that the title that really got the New Wave moving was the 1959 debut feature of François Truffaut, The 400 Blows (a.k.a. Les quatre cents coups). It was the first New Wave film that attracted the international market, winning Best Director at Cannes, as well as getting nominated for the Palme d’Or and the Oscar for Best Screenplay. So, it was The 400 Blows that made the world stand up and take notice of a band of film critics who were determined to turn the stuffy, outdated and overpolished French film industry on its head.

The BFI are releasing this seminal film with a newly restored print on Blu-ray as part of their Truffaut retrospective, which also includes a re-release of Jules et Jim (reviewed by Andy earlier this week), a two-month season at BFI Southbank, a collection of films on BFI Player, partner seasons at cinemas and BFI Blu-ray releases later in spring.

My history with the New Wave and Truffaut is a little rocky (I share many of Andy’s sentiments in his Jules et Jim review) so I haven’t seen nearly enough of their filmographies. The 400 Blows has always sounded like my kind of film though, so I was pleased to be offered a copy of the new Blu-ray to review as it finally gave me a chance to cross it off my list of shame.

The film sees Truffaut look back to his own childhood for inspiration, with a coming-of-age story that mirrors much of his own. One major change, however, was the period in which it was set. Truffaut grew up during the occupation whereas the film is set during the time it was produced. This may have been a practical budget-influenced choice but it also may have been to avoid the political connotations of tackling such a controversial period in French history, which was still relatively recent at the time.

A young Jean-Pierre Léaud plays Truffaut’s avatar, Antoine Doinel, a character both the director and star would revisit over another four films over the following decades. Antoine is unhappy at home, with a mother (played by Claire Maurier) who shows him little affection and a stepfather who can be friendlier but is still a little detached from the boy.

Antoine’s school life isn’t much better either, as he continues to get into trouble with his teachers. He and his best friend René (Patrick Auffay, loosely based on Truffaut’s old friend Robert Lachenay, who was the assistant unit manager on the film) begin to play truant and matters escalate when they’re caught out.

After running away from home and later being caught stealing his stepfather’s typewriter, Antoine’s parents lose all patience and send the boy to a juvenile detention centre.

After finding Jules et Jim rather tedious but enjoying Day For Night and Shoot the Piano Player a lot, I’m pleased to say The 400 Blows joins the latter titles in pushing me towards the Truffaut fan category.

I’ve always been a sucker for naturalistic dramas as well as well-told coming of age stories, so The 400 Blows plays very much to my tastes. A crucial aspect of the film’s success is Jean-Pierre Léaud. Working with children is a notoriously risky venture when making a film but Léaud truly shines in a film-carrying lead role. Though very much based on Truffaut as a young boy, Léaud brought a lot of his own charisma and swagger to the character of Antoine. According to Truffaut’s childhood friend Patrick Auffay, Truffaut was a much more shy and sensitive personality when he was that age, whereas Antoine is more strong-willed and outwardly confident.

Whereas Godard would break a number of stylistic rules with his debut feature, Breathless, Truffaut is a little more reserved here, opting for some graceful camera moves and traditional compositions. There are notable exceptions though, such as the stunning fairground ride sequence and the famously enigmatic, fourth-wall-breaking final tracking shot.

Taking a leaf out of the Italian Neo-Realist movement though, Truffaut did avoid studio production, taking his camera to the streets instead. It caused practical difficulties in shooting in Antoine’s cramped home using a wide ‘scope format, but it does wonders for the naturalism of the film. This is aided by hugely effective production design by set decorator Bernard Evein and property master Raymond Lemoigne.

Helping The 400 Blows hold up brilliantly though, beyond its importance as a key title in the New Wave, is its warmth and vitality. It tells a tragic tale of a boy who’s unappreciated and unsupported by the adults who should be nurturing him, but it never feels like depressive ‘misery porn’. Instead, it’s filled with humour and charm, as we witness the simple pleasures of spending time with friends, getting into mischief at school, going to the fairground and watching a film at the cinema. It’s all perfectly played out from a child’s-eye-view, giving the sad story a boost of youthful vibrance.

It’s easy to see how The 400 Blows caught the world’s attention then. A beautifully realised coming-of-age film that’s brimming with life, it’s easy to relate to and a pleasure to watch, on top of being an important piece of cinematic history.

The 400 Blows is out on 25th April on Blu-Ray, released by the BFI. The picture is a touch soft perhaps, but stable and free of damage. Audio is solid too.

The film is complemented by a decent collection of bonus features:

Robert Lachenay’s commentary is particularly interesting here as not only was he involved in making the film but he was a close childhood friend of Truffaut’s and has his own major character loosely representing him on screen. As such, Lachenay spends most of the time during the commentary describing which scenes were based on the pair’s past and which were fictionalised or embellished. He also points out the numerous director and actor cameos.

Catherine Wheatley’s presentation offers an affectionate history of the relationship between Truffaut, Bazin and Renoir as well as thoughts on how the work of the latter two inspired Truffaut.

Les Mistons is as relatable and vibrant as The 400 Blows. It’s been beautifully restored too, looking even better than the main feature! The short sees a group of boys cause mischief around an older girl they’re obsessed with.

The ‘Images of Paris’ shorts see the BFI providing their customary trawl through the archives to find pieces that complement the feature. The two shorter films are brief snapshots of the city, whilst Metropolitan Railway of Paris is more of a short documentary. It’s an interesting and nicely shot piece.

The screen test footage is also well worth a look. It shows the kids’ natural charm in front of the camera, particularly Jean-Pierre Léaud.

As usual with the BFI’s releases, you also get a booklet. This provides plenty of background information on the film and Truffaut’s career in general.

It’s a fine package overall then, making for a highly recommended purchase.