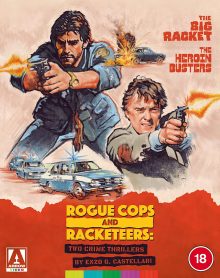 Enzo G. Castellari is an Italian director who, like a number of his contemporaries, worked largely on bandwagon-jumping genre movies during the 60s, 70s and 80s. As such, I doubt he was a particularly respected filmmaker back in the day but, over time, he has become a popular figure among Italian genre movie aficionados.

The mid-to-late 70s were particularly notable for Castellari, with his late spaghetti western Keoma in 1976, which didn’t set the box office alight but is highly regarded now, and the war movie Inglorious Bastards in 1978, which is perhaps most famous for being the inspiration behind Quentin Tarantino’s similarly titled Inglorious Basterds.

In between and alongside these two cult classics, Castellari also wrote and directed two poliziotteschi, a genre that had just peaked and was beginning to wane. These were The Big Racket (a.k.a. Il grande racket), a fan favourite in itself, and The Heroin Busters (a.k.a. La via della droga). Arrow Video are releasing these two films in a limited edition Blu-ray set, entitled Rogue Cops and Racketeers: Two Crime Thrillers by Enzo G. Castellari.

Being a burgeoning poliziotteschi fan, I checked it out and my review of the two titles follows.

The Big Racket sees stuntman-turned genre movie star Fabio Testi play Nico Palmieri, a police inspector who’s desperate to put a stop to a criminal gang who are extorting local business owners in town for ‘protection’ money. It’s clear what’s happening but Palmieri can’t prosecute, because nobody dares testify against the gang who threaten and often deliver sadistic violence against them.

As frustration mounts, Palmieri’s methods become more extreme. When he eventually gets fired for his actions, he decides to go rogue and gathers a band of unhinged men, all of whom have personal vendettas against the gang, to take the law into their own hands. 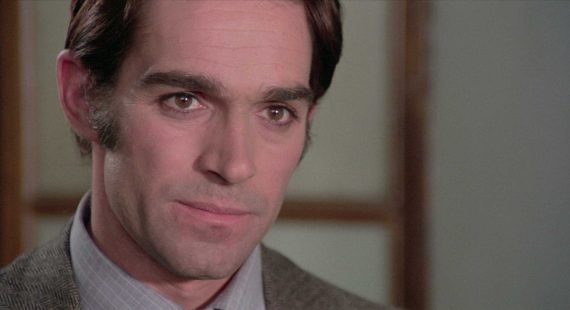 The Big Racket has been criticised for its fascistic concept of fighting sadistic violence with more sadistic violence but, if I’m going to be honest, that’s the kind of thing I want to see in an Italian crime movie from the 70s. You can’t blame Castellari for taking this approach either. The so-called ‘years of lead’ saw Italians face a long period of unrest in their country with terrorist and criminal activity running rampant. It’s understandable that people would be fed up with all the violence and feel constantly at unease whilst the authorities seemed untrustworthy (most famously, a man was killed in police custody after he was arrested for a crime he was later found to have not committed). Castellari just jumped on the mood of the time and offered some release, even if, in reality, the heroes of the film are little better than the villains by the end.

I also wouldn’t like to complain about the film’s content when it’s presented so damn well. Castellari demonstrates here why he’s one of the best genre moviemakers of his generation. Not only is The Big Racket well-paced and filled with action and unflinching violence, but it’s also impressively well made.

For one, the film is stylishly shot throughout. Most notable is an astonishing sequence where we stay inside a tumbling car with Palmieri as he’s thrown around, along with the bits of glass and debris inside the vehicle. I don’t know how they did this without endangering Testi’s life. Perhaps it’s a very clever rig and rear projection but it sure as hell looked real to me. 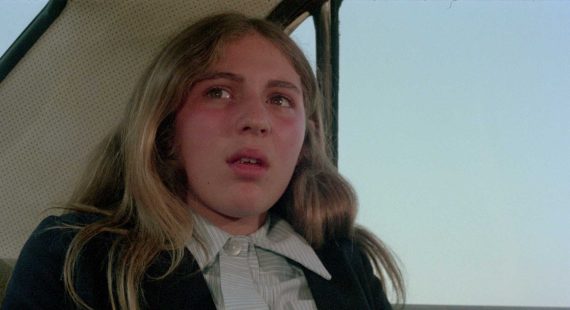 Most remarkable for me though was the editing. Castellari and his regular editor Gianfranco Amicucci do a fantastic job of cutting the film together, with a punchy rhythm and some clever intercutting between scenes and characters. My favourite scene transition, however, didn’t involve a cut at all. After the young daughter (played by Castellari’s own daughter) of one of the terrorised locals is raped we hold on the rapist’s face after doing the evil deed, then he leaves the shot and the father enters it to bring us into the next scene, when he discovers her body.

It’s a truly shocking sequence with a devastating performance from the father (Renzo Palmer) that helps turn the audience against the despicable villains.

As with a lot of Italian genre movies of the time, the soundtrack is excellent too. The De Angelis brothers, Guido and Maurizio, were responsible for this, delivering a funky, bass and electric guitar-heavy score that I couldn’t resist buying after watching the film. 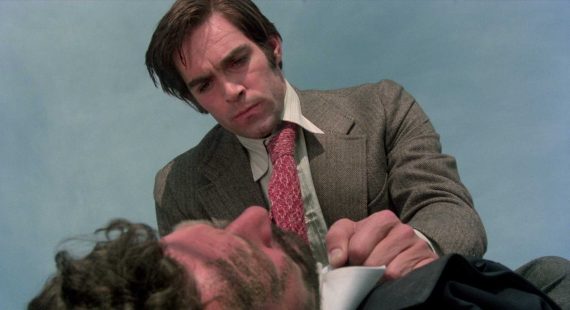 So, whilst The Big Racket may be morally dubious, I believe it’s all the better for it. Stylish, exciting and violent, it’s a genre classic that I imagine effectively embodies the state of Italy at the time. The fear, frustration and rage is all up on screen and, by offering some cathartic wish-fulfilment in its final scenes, Castellari delivers the poliziotteschi goods in almost every area (I say almost because there’s no car chase!)

As Fabio gets deeper into the underbelly of the Italian drug network, it becomes increasingly more difficult for Hamilton to protect him.

I felt The Heroin Busters was a little more by-the-numbers than The Big Racket. Granted, cops taking on ‘protection’ rackets is a story that’s been around since the early days of cinema, but it doesn’t feel like Castellari is firing on all cylinders here in comparison to the earlier film. 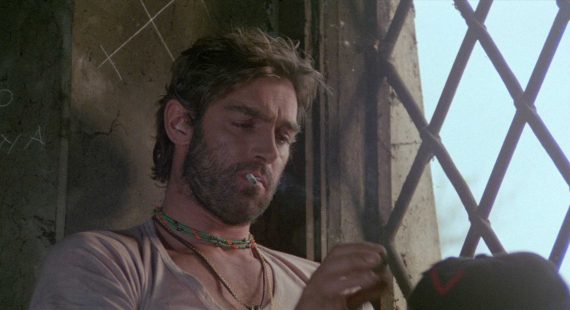 You still get some stylish cinematography in places. Particular good use is made of light and shadow, most notably in a climactic scene in a subway. There are some impressive long shots too, with complex staging.

However, as a genre movie it didn’t quite have the same impact for me as The Big Racket. The aforementioned subway scene has some cool motorbike stunts, the finale involves an impressive (if a little drawn out) aeroplane chase and there are a few dust-ups throughout, but it doesn’t have quite as much energy as I’d have hoped.

Castellari seems more focused on showing the grubby side of the drug scene than thrilling us with action and, to be fair, he does this very well. On top of showing the clear dangers of getting taking heroin (overdosing and getting involved with criminals), there’s a graphic injection shot and a particularly unpleasant sequence where an addict licks some spilt smack from a toilet seat. 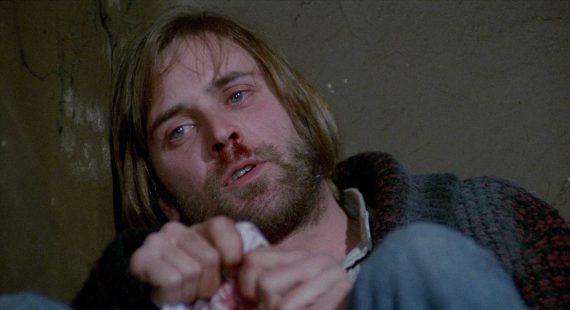 My main problem with the film though was that it felt a little overcrowded. It’s a while until we realise Fabio is an undercover cop, which is a nice touch, but the earlier scenes are stuffed with various drug dealers, so it means we don’t get much time to establish him properly as a character. When we do shift focus towards Fabio, the film keeps cutting over to side characters, or the less interesting Hamilton, so it all feels a bit messy and underbaked.

Still, it’s a decent enough poliziotteschi. It may be a fairly routine undercover cop movie that’s a little over-stuffed in places, but it’s enjoyable enough to get by. With a funky soundtrack by none other than Dario Argento’s go-to band Goblin, and an exciting finale, genre fans will have fun with The Heroin Busters. 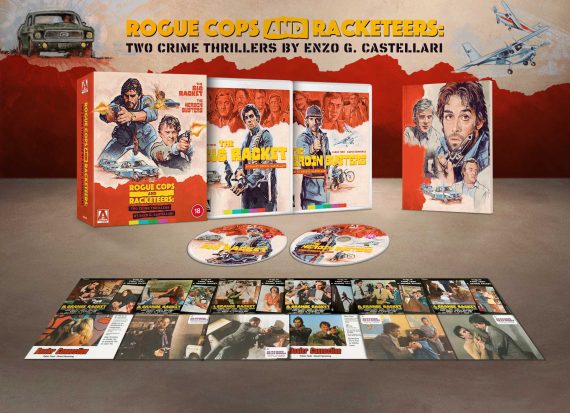 Rogue Cops and Racketeers: Two Crime Thrillers by Enzo G. Castellari will be released on 18th April in a Limited Edition 2-disc Blu-ray set from Arrow Video. Unfortunately, Blu-ray screeners weren’t available, so I only saw the films via online screeners, so can’t comment on the picture and sound quality or the special features. The set looks positively stacked in that regard though, so I’ll be sure to pick up a copy at some point.

Disc One – The Big Racket: 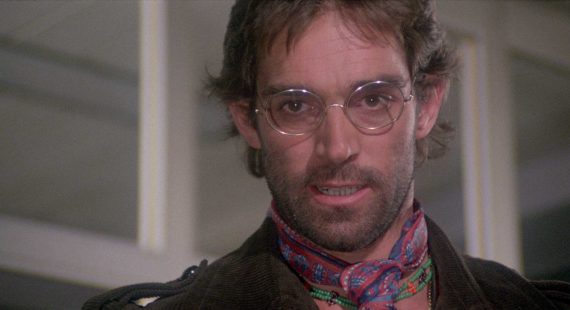