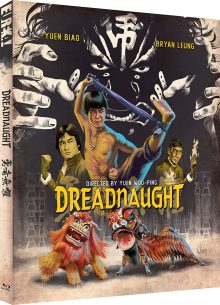 As you might expect, from me being the founder of this website, I’m a great lover of ‘boutique’ home entertainment labels. The concept most likely began with the Criterion Collection, who pioneered the idea when they started releasing Laserdiscs in 1984 and developed a reputation for treating classic films with great care and respect, restoring them and adding additional material such as commentaries and documentaries.

Though I was aware of Criterion fairly early into my movie collecting days, probably once DVD came along and my VHS collection began to grind to a halt, it was a long time before I bought any of their titles (not helped by it being a solely US-based label back then). No, the company that first introduced me to the concept of buying films by label rather than title, was Hong Kong Legends.

Hong Kong Legends came around when I first got into martial arts movies (or was possibly the cause of this) and, as such, I hoovered up every release of theirs I could get my hands on. I was fairly satisfied that I’d picked up most of the best of the label but there was one title I longed for that forever eluded me. That was Dreadnaught.

I remember getting excited when I read about the film, particularly as it was directed by the legendary Yuen Woo-Ping, but, for whatever reason, it didn’t seem to make much of an appearance on DVD shop shelves and whenever I came across it, the price was too eye-watering to tempt me. After Hong Kong Legends went bust and their titles went out of print, I lost all hope of capturing this white whale.

Until, finally, I was thrilled to hear that those beautiful people over at Eureka would be releasing Dreadnaught on Blu-ray. Needless to say I jumped at the chance of reviewing the disc and my thoughts follow. 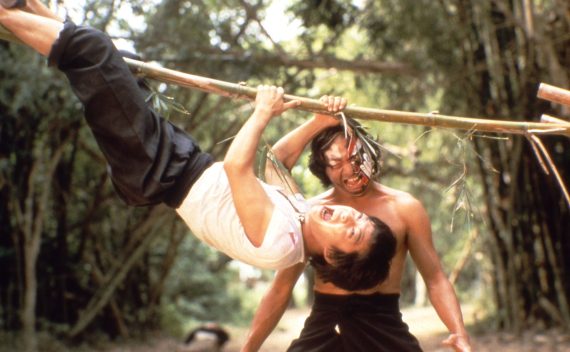 Self-indulgent pre-amble out of the way, let’s look at the film itself.

Dreadnaught sees Yuen Biao play Mousy, a cowardly young man who works for the family laundry business. He’s supposed to go out collecting payments from the locals but everyone takes advantage of his feeble nature, leading to him coming home with nothing.

Mousy is a blood brother to Leung Foon (Leung Ka-Yan) though, who is a pupil of the great Wong Fei-Hung (Kwan Tak-Hing). Foon offers to help, first by beating up the bullies, then by later trying to get Wong to take Mousy as a student.

Meanwhile, White Tiger (Yuen Shun-yee), a violent criminal, is on the run and hiding out with a local theatre troupe. In the opening sequence, we see the villain and his pregnant wife (Kam Kar-Fung) cornered by the police. White Tiger kills a number of them and gets away, but not before his wife is killed. This causes him to snap and get the urge to kill anyone making a ringing bell-like sound (his wife had a bell around her ankle when she died). 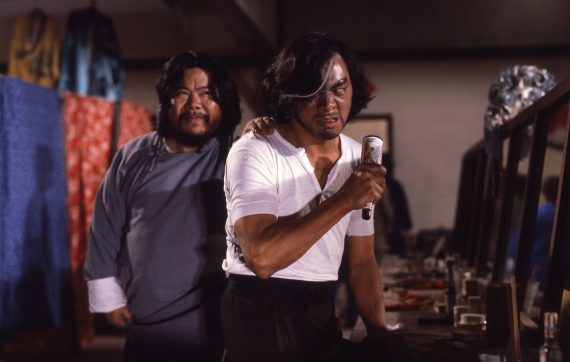 Unfortunately, Mousy wears a ‘lucky’ bell necklace at all times, so becomes White Tiger’s next target. The danger is further exacerbated by the fact that one of Wong Fei-Hung’s rivals is in league with White Tiger and tries to use him to bring down the legendary kung-fu master.

Dreadnaught isn’t your typical kung-fu film. For one, there aren’t a lot of standard fights as such, but a lot of choreographed action and set-pieces instead. Yuen Woo-Ping is the master of these ‘disguised fights’, where unusual props or techniques are used in ingenious ways to stop an enemy or teach them a lesson, and the film is packed with them.

You’ve got the ‘laundry kung-fu’ skills which Mousy and his sister (Lily Li) demonstrate that become important later on. Wong Fei-Hung’s skills as a doctor are also given a martial arts spin in one hugely enjoyable sequence. Then, later, there’s an incredible duel between Wong Fei-Hung and a tailor, who’s trying to use his scissors, needles and such to attack Wong. 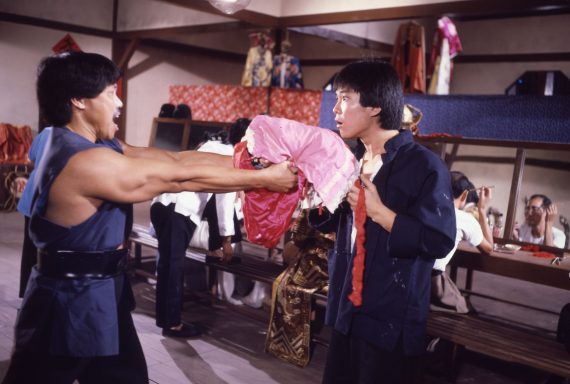 You’ve also got some fantastic lion dancing sequences. Young Master is famous for its central lion dance but I’d argue Dreadnaught trumps that. There’s an early scene with a drunken lion that I enjoyed a lot, then you get an epic sequence with some eye-popping feats of balance and acrobatics, as Wong Fei-Hung’s team put on a show before facing off in a lion fight against their rivals.

Yuen Biao, surprisingly, doesn’t get to properly showcase his acrobatic abilities, but he still does a lot of physical work in his fights and comedy skits. The final showdown is particularly impressive. His performance here is a lot of fun too. He’s often criticised for not being as good a leading man as his contemporaries Jackie Chan and Sammo Hung, but I think he has a certain charm and I enjoyed his cowardly clutz routine here.

Also setting the film apart from other kung-fu movies at the time is the fact it puts an unusual twist on the ‘unskilled hero trains to become a kung-fu master’ formula. Our hero here instead discovers he is already a master of a special martial arts style without even realising it.

There’s a surprisingly strong horror slant to the film too and the villain is well established here, which is unusual in what might otherwise be called a kung-fu comedy. The film opens with a shocking sequence that motivates our ‘bad guy’ and even gives some pathos to the character. Yuen Shun-yee’s White Tiger is wildly over the top but at least we see why he’s snapped. His murder scenes are pretty brutal too, so he’s a genuinely frightening character, unlike the conniving chin-stroking villains we see in most kung-fu movies. This adds great tension to his frequent chasing down of Yuen Biao. There were even moments in the scene where he’s hiding in the laundry that got me wondering if he’d actually survive. 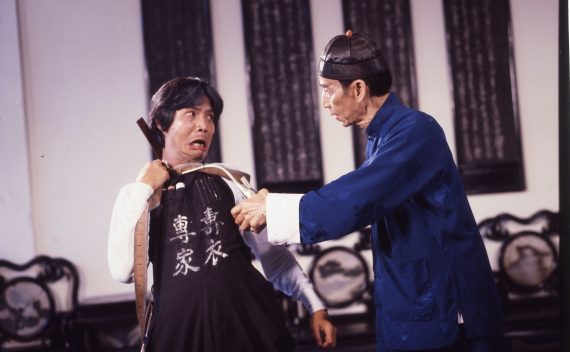 Before I wrap up this review, I must mention the legendary Kwan Tak-Hing. It was the actor’s final performance as Wong Fei-Hung, a role he’d made his own through the classic Wong Fei-Hung series of films that ran between 1949 and 1970 (I’d love for a label to release at least some of these in a boxset). In total he played the character at least 77 times. He was in his mid-seventies at the time of shooting Dreadnaught but still gets to show off his great physicality. Yes, he’s frequently doubled but he still does some of his own moves and looks convincing.

So, I can safely say that, after a long wait, Dreadnaught more than lived up to my expectations. Packed with inventively choreographed action, some fairly brutal scenes of horror and a good dose of comedy, it’s kung-fu movie gold and up there with the best of its era. 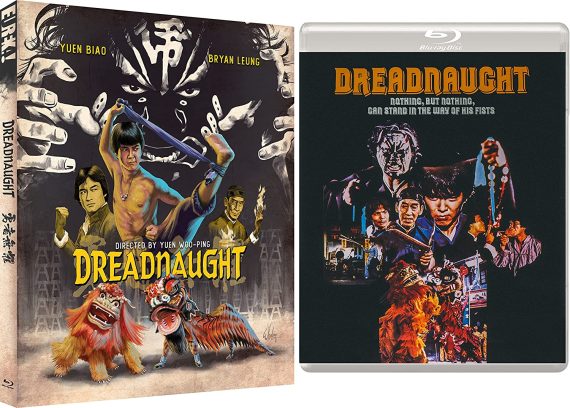 Dreadnaught is out on 25th April on Blu-Ray in the UK, released by Eureka as part of their Eureka Classics series. The picture quality is excellent. It’s a clean print with nice colours, the reds in particular really pop without looking over-saturated. You get three audio options too, the original Cantonese mono and two options of English dubs. I watched with the Cantonese track and thought it sounded decent. The repeated bell sounds are pretty harsh, but I guess that’s the idea, to emulate the way they drive White Tiger crazy.

As mentioned in my review of Odd Couple, the dual Frank Djeng and Mike Leeder/Arne Venema commentaries have become expected with each new kung-fu title released on Blu-ray. Both Eureka and 88 Films have started to use them regularly. As such, it’s hard to keep reviewing their tracks without repeating myself. All I’ll say is keep ‘em coming. Oh, and Djeng is actually joined by Michael Worth on his commentary, a fact not advertised on all the press material. He knows his stuff so is a nice addition, bouncing off Djeng to make for an enjoyable commentary. 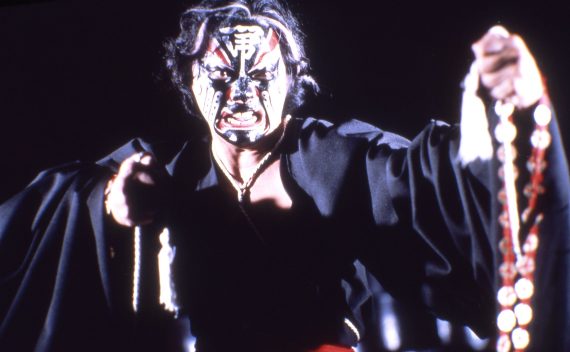 The Lily Li interview is a carry-over from the old Hong Kong Legends DVD. In it, she tells of how she got into the business, beginning with her training and experience at Shaw Brothers. She doesn’t have a massive part in Dreadnaught, so doesn’t have a lot to say about it, but her own story is interesting and she appeared in numerous classic kung-fu films so is a pleasure to hear from. There’s a lot of talk about her work in Young Master in particular.

As usual, you get one of Eureka’s booklets included too. James Oliver’s essay helps you better appreciate the film and provides a little background on the major players behind and in front of the camera. There are plenty of behind the scenes and publicity images included too, which are always welcome.

I also have to mention the cover art. You get a reversible sleeve, so purists can get the original poster art on the front of the Blu-ray, but I love the new artwork on the latest batch of Eureka’s martial arts releases. They’re beautifully painted and give a great idea of what to expect from the film.

So, Eureka once again do a martial arts classic justice on Blu-ray. Long may their fine work continue. Let’s see some Michelle Yeoh classics next though, please!